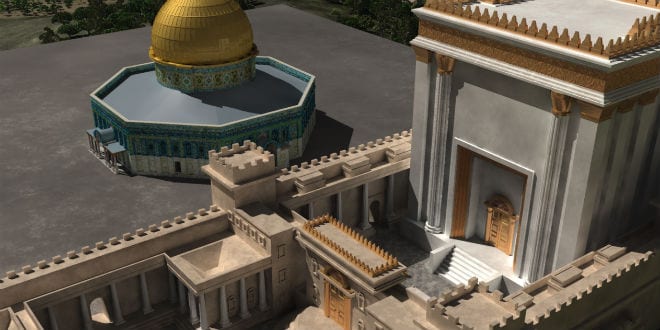 On Thursday, Holocaust Remembrance Day, Jews will be entirely excluded from the Temple Mount due to “Isra and Mi’raj,”the Muslim holiday marking Muhammad’s miraculous overnight journey on Al-Buraq, a mythical winged horse. One prominent scholar of Islam disputes this Muslim narrative and its connection to the Temple Mount, while a Rabbi with a powerful connection to the holy site emphasizes the disturbing message behind a Jewish ban on that particular day.

The source of the Muslim holiday of “Isra” (journey) and “Mi’raj” (ascension, literally ‘ladder’) and the entire Muslim claim to Jerusalem as a holy site is based on a story in the Quran. According to the Quran, Muhammad travelled from Saudi Arabia to “Al-Aqsa” (the far mosque).  From there, he ascended to Heaven, returning to Earth the next day. Some Muslims claim Al-Aqsa is the silver domed mosque on the southern end of the Temple Mount compound.

“This claim is simply fake news,” Dr Mordechai Kedar, a senior lecturer in the Department of Arabic at Bar-Ilan University, told Breaking Israel News. “It is entirely based on opinions and not on any textual source. Jerusalem is not mentioned in the Quran and there is not a basis to believe that Jerusalem had any significance for Muhammad.”

Dr Kedar explained that in the Koran, Al-Aqsa specifically referred to a mosque near Jeharna in Saudi Arabia.

“In early Islam, we see that assigning holiness to the Temple Mount was criticized as an attempt to introduce Jewish concepts into Islam,” he said.

“Jerusalem only took on any significance in Islam in the late 8th century when the Bedouin Muslims prevented the Damascus Muslims from making Haj (pilgrimage) to Mecca. As an alternative destination for Haj, the Damascus Muslims decided on Jerusalem, adding a Hadith (oral commentary) shifting the scene of Muhammad’s Night Journey to Jerusalem in order to justify their decision.”

Dr. Kedar noted that this change, granting a level of significance to Jerusalem for the Damascus Muslims, was short-lived.

“For eight years, Damascus Muslims made Haj to Jerusalem, during which the Dome of the Rock was constructed and the Foundation Stone sacred to Jews became a sacred place to Muslims. This was to create religious competition for the Kaaba (a large stone in Mecca that is the holiest site in Islam),” Dr. Kedar said. “But when they were again permitted to travel to Mecca, Jerusalem was forgotten and even became a garbage dump for construction materials.”

Dr. Kedar cited the notable exceptions of Islamic interest in Jerusalem were the periods in which the Muslims identified a risk that other religions would rule in Jerusalem, such as the during the Crusades, the First World War and of course, the period of Zionism.

Not all agree with Dr. Kedar’s dismissal of Muslim claims to the Temple Mount. Yisrael Medad, a journalist and author who has served as an aid to Knesset members, has been a strong advocate for Jewish rights on the Temple Mount since he first ascended to the Jewish people’s holiest site in 1970.  Medad is outspoken about Jewish rights but he also acknowledges a Muslim claim.

“Even if you say that the Muslim claims on the site are all wrong, that is an academic argument but that doesn’t change the fact that since the 8th century it has been Islam’s third holiest site,” Medad told Breaking Israel News.

As a result, Medad’s advocacy is more focused on what he sees as an egregious case of religious inequality at the site.

“For some reason, in the international arena when the Muslims claim the site based on a story about a winged horse that brought Muhammad to Jerusalem from Saudi Arabia overnight it is enough to give them a religious monopoly over the Temple Mount,” Medad said to Breaking Israel News.

“But our claim based on the archaeological proof, on Roman historical accounts of a Jewish Temple, is invalid and doesn’t grant us any rights. I would like at least an equal status there. ”

“Arafat and the Palestinian Authority can negate the Jewish claims, even though they are substantiated in so many ways, but when we question their claim to the site, it is labeled incitement. Any of our arguments for equality on the site, even the ones that parallel their claims, are rejected.”

“I am very critical of the Muslim ability to administer the site,” Medad said. “When we first started going up in the 70’s, much of the Temple Mount was completely empty and in many sections you could see the Herodian floor. But as Jewish interest rose, the Waqf built stone platforms over this and planted olive orchards. There is more than enough space for all religions to pray, even on days when the holidays coincide.”

As a precedent for his goal of religious equality on the Temple Mount, Medad cited the Jordanian/Israeli Peace Agreement signed in 1994, which formally assigned Jordan a custodial role over the Muslim holy sites in Jerusalem. However, Article 9 of the agreement ensures “freedom of access to places of religious and historical significance.”

“The Parties will act together to promote interfaith relations among the three monotheistic religions, with the aim of working towards religious understanding, moral commitment, freedom of religious worship, and tolerance and peace,” Article Nine reads.