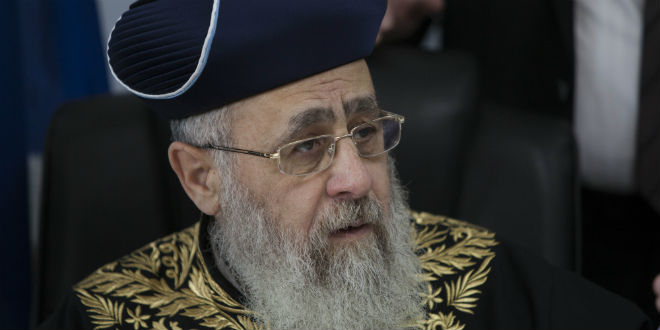 The Chief Sephardi Rabbi of Israel, Rabbi Yitzhak Yosef, released a statement on Sunday condemning alleged chemical weapons attacks by the regime of Syrian President Bashar al Assad as genocide, emphasizing that Jews have a Torah obligation to intervene on behalf of the Syrian people.

“I have said in the past and I will say it again, what’s happening in Syria is a genocide of women and children in its cruelest form, using weapons of mass destruction,” Rabbi Yosef said in the statement. “We have a moral obligation not to keep quiet and to try and stop this massacre.”

The rabbi was referring to an alleged attack on Saturday in which Assad forces dropped barrel-bombs containing chlorine gas on the rebel-held town of Douma killing an estimated 45 civilians.

Assad has been accused many times during the seven-year civil war that has killed an estimated 470,000 Syrians and created a massive refugee crisis. This became an international concern and in a joint Russia-US brokered deal in 2013, Assad agreed to destroy all of his chemical weapons. Assad was subsequently accused on several occasions of using chlorine, mustard gas, and sarin against civilian populations.

Rabbi Yosef emphasized that Jews have a special obligation to stop what he labeled a “genocide”.

“As Jews who have experienced genocide, as Jews whose Torah is a light to the nations, it is our moral obligation to try and stop this murder. It is an obligation no less important than the moral obligation to destroy [the] nuclear reactor in Syria,” he said, referring to an Israeli airstrike in September 2007 that destroyed an unfinished reactor being built by the Assad regime.

Rabbi Yosef has spoken out against the Assad regime before. During an inter-religious meeting with Palestinian Muslim clerics hosted by President Reuven Rivlin in 2016, Rabbi Yosef referred to the situation in Syria as “a small Holocaust”.

“Millions of refugees are homeless, hundreds of thousands of others are starved, under siege,” the rabbi said at the time. “They are not our friends, but they are human beings who are suffering a small holocaust.”