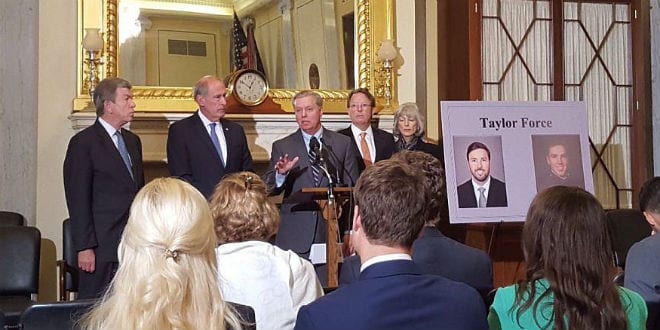 Prime Minister Binyamin Netanyahu praised Congress and US President Donald Trump Sunday for passing the Taylor Force Act, which will deduct aid money from the Palestinian Authority to offset PA payouts to the families of terrorists who attack Israelis.

The bill is named after an American student, Taylor Force, a retired US Army  officer who was murdered by a Palestinian terrorist in Jaffa while visiting Israel in 2016. The measure, which was approved by Congress and signed into law by President Trump,will put a halt to US funding to the Palestinian Authority until Ramallah stops doling out so-called “pay-for-slay” payments. However, the measure includes three exceptions, allowing for US funding to Palestinian water and childhood vaccination programs, as well as to East Jerusalem hospitals.

“It is designed to deny to the Palestinian Authority hundreds of millions of dollars that they invest in encouraging terrorism and lavish on terrorist families and the murderers themselves,” Netanyahu said.

“I think that this is a very powerful signal from the US which is changing the rules. It is unwilling to accept the truth of the past or, I should say, the lies of the past, and live with them. It is simply exposing lie after lie and is standing up on truth after truth. I congratulate the American Congress and President Trump for these decisions,” he added.

At the same time, Palestinian spokespeople blasted the legislation, saying it unfairly targeted the Palestinian Authority and rewarded “the illegal Israeli ‘occupation’.”

“Halting aid to the Palestinian Authority as a tool for a politically-motivated financial pressure does not work, and severely damages the prospects for peace in the Middle East,” said Dr. Husam Zomlot, head of the PLO General Delegation to the United States. “Congress’ bias is flagrantly obvious, targeting a stipend program that provides dignity and education for children and families of the victims of occupation, and security for both sides, while turning a blind eye towards Israel’s daily violations of U.S. policy and international law.”