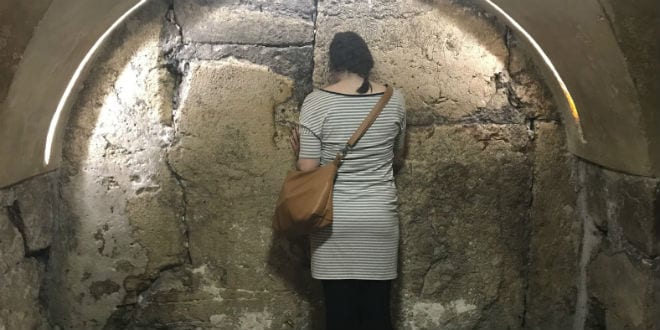 As a volunteer madricha (leader) for Mayanot Birthright, I always wonder how much impact we will have on our participants’ connection to Israel. We see many sites, stones, and cities and try to make each one relevant to the participants’ lives. While we almost always get good feedback, we rarely hear of how the trip impacted participants down the road.

As my tour educator, Daniel Charter put it to me at the beginning of our Birthright trip from March 12-19, he often feels like a frustrated farmer, planting seeds and not knowing what will come of the flowers.

Returning from a fun night out in the Mahane Yehuda market, music pumping and participants dancing in the back, Daniel and I sat in the front of the bus, we knew the next morning would be difficult.

Daniel told me that he always dreads guiding there even though he knows it’s impactful for his participants.

“On these tours, I am always joined by 23-year-old Daniel, during his army service. He walks the grounds in his alef uniform with no shoes on, always crying, always sweating in the hot summer sun. Proud dreams of ideals dashed with the smell of death,” he said.

As we started our tour, one of our soldiers revealed to the group that a former schoolmate of his was killed and buried the night before after being rammed by a terrorist.

Daniel took us to the grave of his good friend Michael (Mike) Levin.

He told us about the day he was buried, the 9th of Av: “I breathed deep on the way down to section daled, to Mike, an American oleh, whose love for God and the people of Israel is eternal. I remembered Mike talking about Yoni Netanyahu’s book and being so eager to fight, so eager to give for what he believed. He was so happy to tell me about how he was a sharpshooter and how they were always in front and therefore much more likely to die. He was smiling at the darkness and laughing at his fate.”

The rest is blurry. The Old City.

We took our group through the tunnels, just about to exit the Old City through the Zion Gate as we saw a medic running and thought to ourselves, “It’s probably just a car accident or a dehydrated tourist.”

But then, an ambulance. And then another. Then, every second, another vehicle with flashing lights came swerving down the street. We knew. And the Israeli soldiers knew.

We were in the Old City with a terrorist. A man stabbed four times, not far away, while we were safe in the Jewish quarter eating ice cream. He died that night.

That night, in the closing session, the participants told us, one by one, what they got out of the trip. The events of that morning seemed to stick in everyone’s mind.

“Today was a perfect example of what life here encompasses,” said one participant. “We got a personal side of the dangers that surround this country. Today made it real and we saw it first hand.”

Another said, “Everything hit home after the attack happened. We were sheltered for the first six days of our trip, and we were made aware of what could happen. After it did happen, it was mind-blowing to me. Any-law abiding citizen could have been killed in an instant for no reason. Thank God, I don’t have to deal with that stuff back home, but Israelis have to deal with it on a daily basis.”

A third added that the attack gave him a tangible feel of what’s going on in Israel, and they will take from the trip an obligation to question American privilege and support the State of Israel.

A soldier added his hope that the Israelis on the trip provided a complex perspective of what life is like, adding, “Today was instrumental in understanding that.”

While the life of the man in the Old City was taken by the terrorist, his life was not taken in vain. As the day began at Har Herzl, reflecting on Mike’s love for the country and wondering whether our planted seeds would grow into flowers, it ended with an understanding that although the terrorist took the life of an innocent person, he simultaneously watered our many sprouting buds, going back to the United States with a true sense of life in Israel and love for their new country.

Daniel Charter contributed to this report.