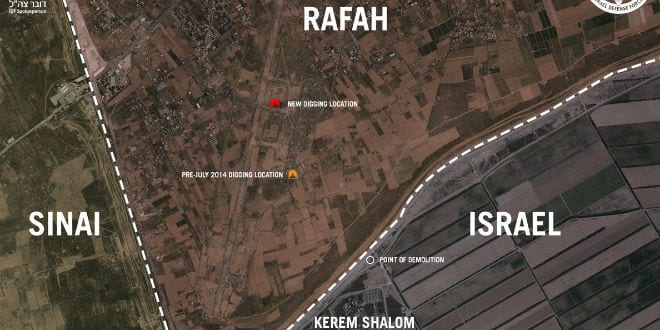 The Israel Defense Forces (IDF) destroyed two underground terror structures in the Gaza Strip, one of which was an old terror tunnel that was being reconstructed by the Hamas terrorist organization.

“Using precise intel and new tech, IDF thwarted (an) attempt by Hamas to renew (an) old terror tunnel near Kerem Shalom,” said Jonathan Conricus, the IDF’s International Spokesman and Head of Social Media, in a statement on Twitter.

“Hamas is responsible for all hostile acts from Gaza and we will continue to defend our people and border.”

Conricus added that it was the fourth terror tunnel that has been destroyed by the IDF since November.

The “old terror tunnel” was built before Operation Protective Edge in 2014, the third war between Israel and Hamas since 2008. During the 2014 war, the tunnel was partially destroyed, and Hamas was attempting to rebuild it by connecting whatever was left of the tunnel with another underground passageway.

A second underground target located in the central Gaza Strip and referred to as a “subterranean complex” by Conricus, was demolished as well over Saturday night.  The IDF has been using advanced methods of late to demolish the underground terror structures.

“Whoever thought they would succeed in attacking us [from] underground, has run into an iron wall.”

Israeli Defense Minister Avigdor Liberman also vowed to completely obliterate the entire underground terror network by the end of the year. Netanyahu made a similar commitment as well on Sunday morning.

“The IDF destroyed two more terror tunnels last night,” he said. “It is our policy to act with conviction against any attempt to harm us, and to systematically eradicate the tunnel infrastructure, and we will continue to do so.

Netanyahu also claimed that foreign assistance to Gaza was being placed in such underground structures.

“Its time the international community recognizes the fact that the foreign aid money to Gaza is buried underground,” he added.

Netanyahu’s remarks were made against the backdrop of an international conference at the White House last week, which covered the issue of solving the ongoing humanitarian issues in the Gaza Strip.

US President Donald Trump’s special representative for international negotiations, Jason Greenblatt, told the participants at the conference that visiting the locations where underground terror tunnels were discovered was crucial for understanding how to effectively transmit foreign aid to the population in Gaza.