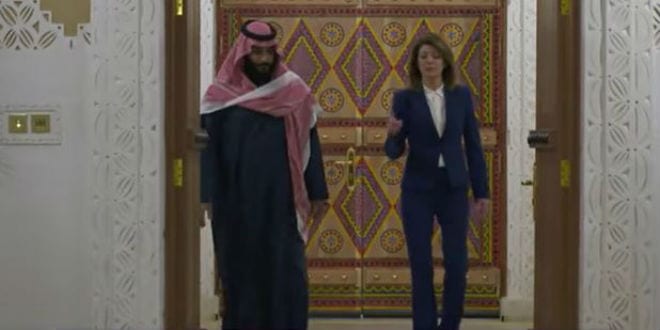 Saudi Arabia’s Crown Prince Mohammed bin Salman said that his country would not hesitate to acquire nuclear weapons if Iran gets a hold of one, in an interview with CBS that will air on Sunday.

“Saudi Arabia does not want to acquire any nuclear bomb, but without a doubt if Iran developed a nuclear bomb, we will follow suit as soon as possible,” Prince Salman said in the interview.

A segment was aired on Thursday, and the entire interview will be shown on the CBS program, “60 minutes.”

As a monarchy that leads the Sunni world of Islam, Saudi Arabia finds itself at odds with Shiite Iran as both are competing with each other over regional dominance. Although both countries have yet to engage in open conflict with each other, they have taken opposite sides from one another in several proxy conflicts in the region such as in Yemen, Syria and Iraq.

In the CBS interview, Prince Salman denied that there was any rivalry with Iran.

“Iran is not a rival to Saudi Arabia,” he told interviewer Norah O’Donnell. “Its army is not among the top five armies in the Muslim world. The Saudi economy is larger than the Iranian economy. Iran is far from being equal to Saudi Arabia.”

“He wants to create his own project in the Middle East very much like Hitler, who wanted to expand at the time,” he told O’Donnell.

“Many countries around the world and in Europe did not realize how dangerous Hitler was until what happened, happened. I don’t want to see the same events happening in the Middle East.”

At 32 years of age, Prince Salman is considered to have a volatile personality. He is new to his exalted position, being named the heir apparent last June by his father, King Salman. After being appointed heir apparent, Prince Salman jailed hundreds of officials including princes, in what he claimed to have been a purge of government corruption but what many understood to be a consolidation of power.

The prince will be meeting next week with US President Donald Trump.

Saudi Arabia is not known to have a nuclear weapons program and is a vocal opponent to nuclear weapons in the Middle East. After former US President Barack Obama helped broker an international agreement with Iran concerning its nuclear program in 2015, reports surfaced that Saudi Arabia was looking to purchase nuclear weapons from Pakistan.

For the time being, Saudi Arabia’s cabinet approved a policy this week for a new atomic energy program, which Riyadh claimed is aimed at lowering the dependence on oil.

The new policy states, “all nuclear activities will be restricted to peaceful purposes, within the framework defined by international legislations, treaties and conventions.”