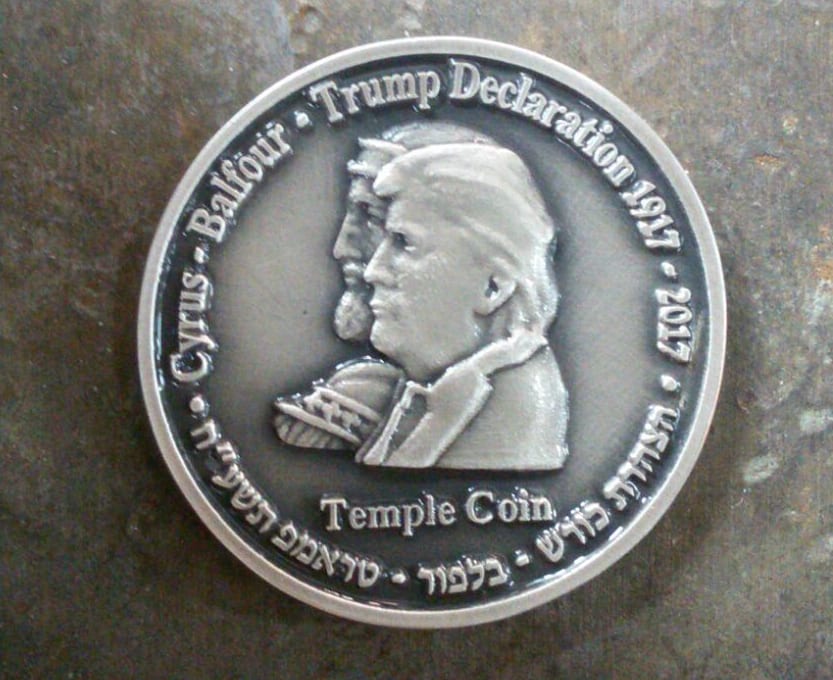 A newly minted coin featuring President Trump, King Cyrus, and the Third Temple has been featured in media around the world, graphically illustrating that support for the Jewish Temple on the Temple Mount is now a global phenomenon that is transcending political and religious boundaries.

Three weeks ago, the nascent Sanhedrin and the Mikdash (Temple) Educational Center, a non-profit organization for education about the Temple, partnered in a risky venture to mint a commemorative medallion with an image of President Donald Trump and the Persian King Cyrus. The flip side features a stylized image of the Third Temple.

Both signed a contract to mint 1,000 coins in the hope that the message on the coin that calls out to the US president to support the Jewish claim to the Temple Mount, would resonate with enough people to cover the total expense of the coins. They offered the coins to the public for a minimum donation of $50, and the response has exceeded all their expectations.

Breaking Israel News first broke the story about the coin, which quickly became a sensation in the Israeli press and then followed by stories in The New York Times, Newsweek, Reuters, Associated Press and other major international media. The organizers are also being interviewed by the Swedish, British, and Chinese press.

“It is clear that interest in the Temple is much stronger and much more universal than previously thought,” Mordechai Persoff who established the Mikdash Educational Center, told Breaking Israel News. “This goes beyond political boundaries.”

Persoff said that on Sunday, they began shipping coins to Hong Kong, Ireland, Poland, China, Brazil, Australia, Germany, Belgium, although most of the orders have been from the United States.

Rabbi Hillel Weiss, the spokesman for the Sanhedrin, was surprised by the overwhelming response, but the message was clear to him: Support for the Third Temple is growing.

“This is enormously popular among America’s friends and very unpopular among the people who hate America,” Rabbi Weiss told Breaking Israel News.

“Obama hated Israel and Jerusalem, and as a result, America’s enemies became stronger while he was president, many acquiring or developing nuclear weapons. It is important to realize that the most powerful and enduring hope America has is to side with Hashem. The only hope for this is to support Jews taking their place as a Nation of Priests and a Light Unto the Nations.”

The source for the concept behind the coin is the Biblical silver half-shekel that was collected in Temple Times from every Jewish man. The Trump medallion does not adhere to the requirements of this Biblically mandated coin but proceeds from sales of the coin will go towards projects educating the public about the Jewish Temple.

Persoff told Breaking Israel News that if the demand grows, they will consider minting a larger limited special edition Temple Coin based on the current design.

The next project that the two organizations will cooperate on is a reenactment of the Paschal Sacrifice on March 26. At that time, Kohanim (Jewish men of priestly descent) will recreate the Temple service in a manner resembling the Temple service as much as possible. They will be dressed in the priestly garments and using silver vessels intended for use in the Third Temple. A lamb will be sacrificed and roasted in a Biblically authentic manner.