The Internet as the Final Battleground and Replay of Eden

Home » The Internet as the Final Battleground and Replay of Eden 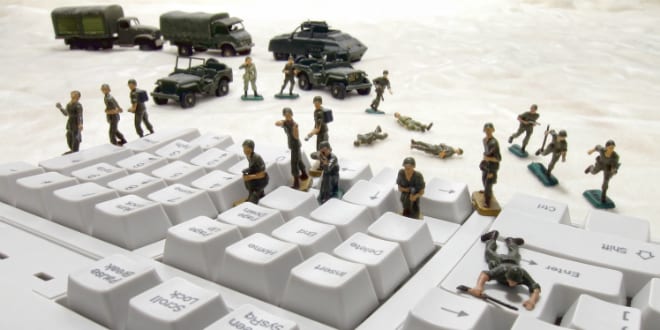 A 37-page document, the culmination of an almost year-long Mueller investigation and presented to Congress last week, concluded that the Russian government launched an insidious and successful attack against the United States (US) using two formidable weapons: social media and the internet. This comes as no surprise to Rabbis who see the internet as one of the major battlefields in the War of Gog and Magog.

Last year, before the internet was publicly acknowledged as a weapon being wielded by superpowers against one other, Rabbi Shalom Arush, a prominent leader in the Hasidic movement in Israel, said in an interview that “technology and the mass of online abomination [is] spiritually murdering people”.

“Gog and Magog are the chatrooms, the texting, the screens and social media that render people zombies, unable to think, communicate or read,” the rabbi said, presaging the alleged Russian incursion into the 2016 US presidential election.

Rabbi Pinchas Winston, a prolific end-of-days author and educator, agrees that the internet is one of Man’s ultimate battlegrounds and has a particularly powerful role to play in the end-of-days.

“The internet is just knowledge, but that is the greatest weapon today. As we just saw, it can bring down governments and even be used to start wars,” Rabbi Winston told Breaking Israel News. “It has this power because its source and very nature come from the Bible.”

Rabbi Winston believes that the internet has its source in the Creation Story. The rabbi explained a method in Kabbalah (Jewish mysticism) that overlays the six days of creation onto a historical framework in which each day corresponds with a specific millennium in history. The seventh millennium is after the Messianic Era. It corresponds to the first stage of Olam HaBa (the world to come)

In this historical framework, each “hour” of “daylight” for each millennium is a total of 83.3 years, and the internet came onto the scene in the final “hour” of the current millennium.

“According to this formula, we are currently in the sixth day, the sixth millennium, and the year 1990 corresponds to the final hour,” Rabbi Winston said. “The internet first went online in 1990, corresponding to the precise moment Adam ate the fruit of the tree of Knowledge.”

“After Adam ate from the fruit, the story moved from Paradise to difficulty,” he elaborated. “1990 corresponds to this, initiating an especially turbulent 83 year period of history that will end in 2073.”

The rabbi explained that the internet, corresponding to Adam’s failure, is a replay of the event and a second chance that is taking place in the Messianic era.

“In the Garden, failing the test sent us into exile,” Rabbi Winston explained. “Before the Moshiach, passing the same test will bring us back from exile.”

The rabbi noted that the snake caused Adam and Eve to sin, creating a blemish in knowledge that led to man’s expulsion from the garden. Rabbi Winston pointed out that in gematria (Hebrew numerology) nachash (snake) equals 358, the same as the word moshiach (Messiah).

“It was the snake that brought Chava to eat from the tree, effectively triggering thousands of years of exile,” Rabbi Winston said. “It will be Moshiach who will reverse all the damage the snake caused and finally bring an end to exile.”

“It isn’t enough to have knowledge,” Rabbi Winston explained. “To win this modern battle we have to go back to the Tree of Knowledge of Good and Evil, to not only learn the ‘what’ but also to learn the ‘why.’”

“Without question, the Internet is a modern-day “tree of knowledge,” he continued. “Of good? Unquestionably. Of evil? Also unquestionably, and it is also quickly proving to be one of mankind’s greatest tests at this late stage of history, as we continue to move forward during this ‘tenth hour’ of the sixth millennium.”

Rabbi Doniel Katz, a Torah educator who lectures on consciousness, also acknowledges the role the internet is playing in the end-of-days.

“There are many key elements making up the end-of-days, and technology is certainly a part of that,” Rabbi Katz told Breaking Israel News.

Rabbi Katz cautioned that this power bears a potential stumbling block that also connects to its source in the Creation Story.

“There are kabbalistic sources which explain that what happened with the eating of the fruit affected sexuality. The Hebrew word for ‘knowing’ is yadah,” the rabbi said, citing a verse from Genesis.

Now the man knew his wife Chava, and she conceived and bore Cain, Genesis 4:1

“Knowledge is what you choose to bond with,” Rabbi Katz said. “In kabbalah, this is called  Yesod and it is the final tikkun (fixing) before Moshiach.”

“This tikkun is being made on the internet since majority of the internet is pornography,” he continued. “This is an important aspect of this battle that must be waged today.”

Rabbi Winston’s views on Redemption are explained in depth on his blog, The Geulah B’Rachamim Project (redemption through mercy).