Christians and Jews Kick Off Joint Bible Study at The Knesset 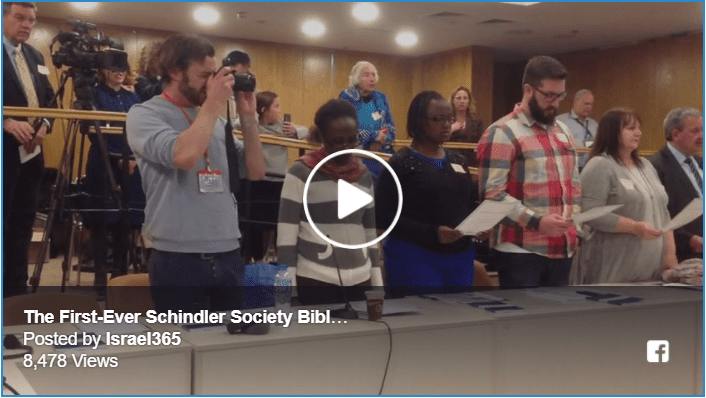 A revolution of Torah study is something that was promised in the Bible a long time ago, said Rabbi Tuly Weisz, speaking at the first-ever Schindler Society Knesset Bible Study.

Nearly 200 Jews and Christians gathered at the Knesset on Tuesday for the event, which was co-sponsored by the Knesset Caucus for the Encouragement of Bible Study and Israel365. Knesset Members Yehudah Glick (Likud), Robert Ilatov (Yisrael Beiteinu) and Sharren Haskel (Likud) attended.

At the event, Weisz announced the upcoming publication of The Israel Bible hardcover edition, which will be published in honor of Israel Independence Day. The Israel Bible is the world’s first Tanakh, Hebrew Bible, to highlight the special relationship between the land and the people of Israel. Through traditional and contemporary Jewish sources, The Israel Bible seeks to present God’s eternal and unchanging love for the Promised Land and His Chosen People from biblical times until today.

Weisz taught Isaiah 2 from The Israel Bible, demonstrating that the Torah belongs to the Jewish people as well as the entire world.

“The Torah will bring Jews and non-Jews together and become the source of unity for all people,” said Weisz.

Haskel noted that history repeats itself and “we see how the Bible has repeated itself time after time, including the revival of the Hebrew language.” She was awed at being able to sit in the modern Knesset as well as to study from the ancient Book and witness how every verse in the Bible can be seen live in the Land of Israel today.

“The fact that we have this amazing miracle in this country and to be able to sit in this modern Knesset and with representatives of the Jewish people and study together this ancient Book that every single verse you can learn about – current things are happening still today.”

“We can see the Book turning into reality,” she said.

Ilatov said that what ties Jews and Christians together is the Bible because “the Bible is the foundation of our faith in one God.”

Ilatov spoke in Hebrew, noting that “the Book you are reading today is written in Hebrew. One day, everyone will speak Hebrew.”

Jim Garlow and Rosemary Schindler, founders of the Schindler Society, were unable to attend the event at the very last minute. However, they shared a video about their decision to launch Bible study in the Knesset.

The Schindler Society, a US-based Christian group, has introduced ongoing Bible study in the US Congress and the United Nations.

“The reason we love the Jewish people is not because of some hidden agenda. We stand with Israel because God promises to bless us if we do and since it is His plan to bring the Jews back to their homeland, we are to support God’s wonderful plan,” said Garlow. “The Christians are there to listen, not lead. We come as learners.”

Clila Bau-Cohen, the daughter of Joseph Bau, one of the Holocaust survivors who was saved by Oscar Schindler, represented the Garlows. She said that back in the 1950s, her father prophesized that all the nations will come to Israel and to Jerusalem to learn Torah.

“My father used to say that the most important chapter in the Bible is Isaiah 2,” Bau-Cohen said. “And this is what we are learning here. This is so exciting for me.”

Rabbi Weisz said that through the Schindler Society’s sponsorship of Bible Study at the Knesset, “we are indeed witnessing a historical turning point: ‘All the nations shall gaze on it with joy [and] out of Zion shall go forth the law, and the word of the Lord from Jerusalem.’”