Netanyahu Threatens to Act Against Iran to Prevent ‘Noose of Terror’ 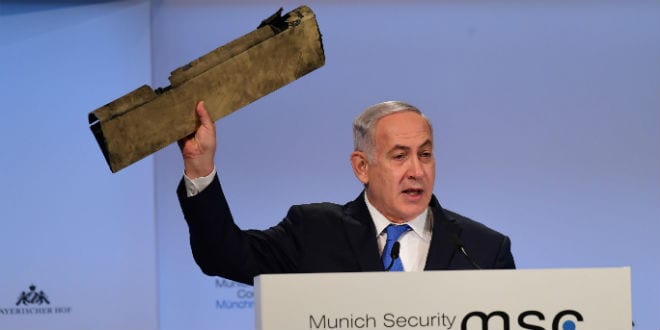 Just a week before the Jewish holiday of Purim, Prime Minister Benjamin Netanyahu is threatening war against what he considers to be another attempt by yet another Persian potentate to destroy the Jewish people. In a speech at the Munich Conference on Sunday, Netanyahu said the Jewish state is prepared to act against the modern-day Persian regime of Iran in order to defend itself against Tehran’s aggression in the region.

“Israel will not allow Iran’s regime to put a noose of terror around our neck,” Netanyahu insisted. “We will act without hesitation to defend ourselves, and we will act if necessary not just against Iran’s proxies that are attacking us, but against Iran itself.”

During his remarks, Netanyahu referred to the regime’s most recent act of aggression against the Jewish state while holding up a piece of the Iranian drone that illegally infiltrated Israeli airspace on Saturday, February 10.

“We destroyed that drone and the control center that operated it from Syria, and when our places were fired upon, Israel destroyed Syrian anti-aircraft batteries.”

Netanyahu also spoke out against the 2015 international nuclear agreement with Iran, also known as the “Joint Comprehensive Plan of Action” (JCPOA), comparing it to the Munich Agreement with Adolf Hitler in 1938.

“Just as was true 80 years ago, an agreement that was seen as appeasement has only emboldened the regime and brought war closer,” Netanyahu said.  “In fact, it’s unleashed a dangerous Iranian tiger in our region and beyond.”

“Through its proxies, Shia militias in Iraq, the Houthis in Yemen, Hezbollah in Lebanon, Hamas in Gaza; Iran is devouring huge swathes of the Middle East,” he continued.

In that vein, Netanyahu urged the attendees to not follow in the same path of Munich 80 years ago.

“Let us pledge today, Ladies and Gentlemen, here in Munich, not to repeat the mistakes of the past. Appeasement never works.”

‘Peace Between Jews and Persians Will Flourish Again’

Netanyahu’s remarks come less than two weeks before the Jewish holiday of Purim, which is read about in The Book of Esther. The main theme of this story surrounds an ancient Persian king whose evil assistant, Haman, hatches a plot to kill the Jews. At the last minute, Queen Esther convinces her husband, Persian leader King Ahasuerus, to come to the Jews rescue and the Jewish people are saved.

Netanyahu expressed hope that the Jewish and Persian people will once again work together.

“I am convinced that one day this regime will fall, and when it does, the great peace between the ancient Jewish people and the ancient Persian people will flourish once again,” he said.