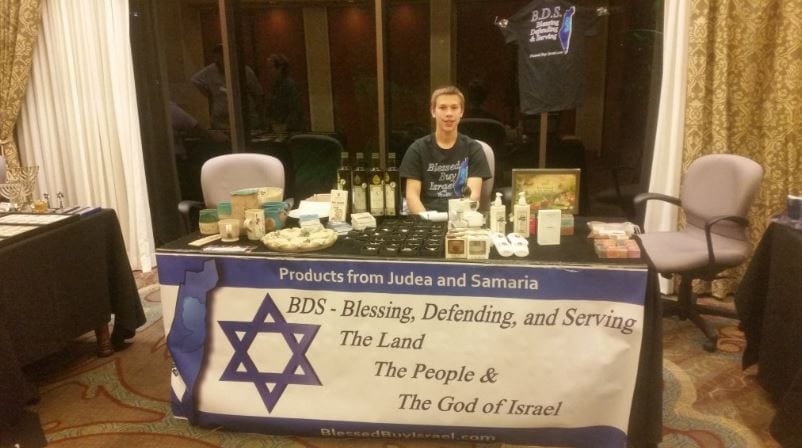 “These people are the real deal,” said Canadian Barrett Ens about the Jewish men and women who raise their families in Israel’s Biblical heartland.

Ens’ Word of Life Tabernacle Community recently gifted the funds to upgrade the electric infrastructure around the Jewish hilltop town of Esh Kodesh (“Sacred Fire) in Samaria to “make things a little more comfortable” for the Jews in the heartland. He said these Jews are fulfilling God’s Divine plan by living over the Green Line.

Ens, who first came to Israel in 2009 with his pastor, Terry Sproule, said when he visited these hilltop towns, as well as the larger Jewish settlements in Judea and Samaria, he saw the Bible come to life. He knew he had to be a part of building the heart of the Land of Israel.

“They are redeeming the land that God gave them, and they are willing to sacrifice everything for it,” he said. “Remarkable. Incredible. Inspiring. Admirable.”

Since 2012, Ens’ community has been donating much-needed funds to hilltop communities. They supported a power upgrade for Yair Farm, also in Samaria. They have built a playground in Esh Kodesh, improved security in the area, and even donated to extend and connect regional roads. Ens said they did it all in the name of God.

“You go up on these hilltops and you see large families with the determination, courage and perseverance … laying hold on what God has given them. That is faith,” he said.

Ens believes that the fact that Israel is a nation back in their land, speaking their ancient language and following their ancient traditions is “miraculous.” He said the first recent miracle of the Jewish people took place with the founding of the State of Israel 70 years ago in 1948, when the largely outnumbered Jewish army defeated its Arab enemies. Then, in 1967, and again in 1973, the Jewish people once again were victorious against stronger armies with bigger weapons.

“God put them in their homeland, God gave them these victories, God returned this land to the Jews,” said Ens.

He said it is a Godly mandate to “take hold of the land God returned to the Jewish people” by planting and building, as it says in Amos 9:14, “I will return the captivity of my people Israel, and they will rebuild desolate cities and settle them.”

Said Ens: “We want to be on the Lord’s side, we want to support what we believe God is doing.”

Steve Wearp, a Christian Zionist originally from Texas, expressed similar sentiments to Ens. A few years ago, Wearp decided to pursue a dream of advocating for the Land of Israel. He founded Blessed Buy Israel, a company that sells products exclusively made in Judea and Samaria.

Blessed Buy Israel is meant to combat the anti-Israel Boycott, Divestment, Sanctions (BDS) movement, which is working to end international support for Israel. Wearp started Blessed Buy Israel shortly after in 2015 the European Union made a political decision to label Israeli products from the Biblical heartland. He said it felt like the EU was putting “a big yellow star on Jewish storefronts – it was 1933 all over again.” In 1933, Nazi Germany began boycotting Jewish businesses.

“We believe that Christians and Jews are called to a different standard of BDS, which is to Bless, Defend and Serve the Land, people and God of Israel,” said Wearp. “We want to support [the Jews in the Biblical heartland] financially and help them tell their stories.”

Wearp first visited the ancient city of Shiloh in Samaria in 1991. Then it was only grass fields and rocks with little to see. Today, Shiloh and most of the rest of the heart of Israel is vineyards and olive groves.

“The Lord told Israel to go and take possession of the land,” said Wearp. “Taking possession means to build and restore and plant, to restore the ancient cities, to establish infrastructure.”

Wearp said that any Christian who worships the God of Israel and prays for the redemption must work alongside Israel to restore the land.

“We may not agree on who the messiah is, but we agree on what he would want us to do and that is to work together to bring about the Messianic era,” said Wearp. “We can walk together and be a blessing.”

Isaiah 52:7 teaches, “How welcome on the mountain are the footsteps of the herald … telling Tzion, ‘Your God is King!’”

Today, many of those “footsteps” come from the feet of Tommy Waller, the head of HaYovel, who together with his wife, 11 children and 20 grandchildren, bring as many as 600 Christian Zionist volunteers to Israel each year to prune and harvest the vineyards of Judea and Samaria.

“For us, to prune where God spoke to Abraham, the place where the shekinah [spirit] of glory settled, where the women danced and got their husbands, and where grapes were harvested for the temple feast – wow,” Waller told Breaking Israel News. “We can open our scriptures and see the stories coming to life.”

When Waller first came to Israel 14 years ago, he said he was “totally clueless” about how meaningful his work would be and the spiritual awakening that would ensue. Now, he realizes that God’s plan is for the Jews to live in their historic and Biblical homeland, and for Christians like himself to work alongside the Jews to bring about the redemption. He said in the Messianic era the rebuilt Temple will be a house for all nations, and Christians will have responsibility in redemption, too.

“We have to accept God’s plan,” said Waller. “Our faith is evidenced by physical reality. I have seen the promises of God revealed.”

Waller, his family and their volunteers live together on Har Brakha, located on the southern ridge of Mount Gerizim in Samaria, in the Biblical heartland. Har Brakha is around 2 miles from Nablus, one of the largest Arab towns in the West Bank. Waller said these Arabs are benefitting from the “amazing industrial revolution” that is happening in the Biblical heartland at the hands of the Jews.

“The Arab workers are making three, four and five times more because the Jewish people have returned,” said Waller. “It is obvious to me, that the Arab communities are blessed when the Jews plant and build this land.”

He continued, “We need more beautiful feet – more Christians – to come and work the land to bring about the redemption.”

Are you interested in connecting with the heart of Israel? Learn more.