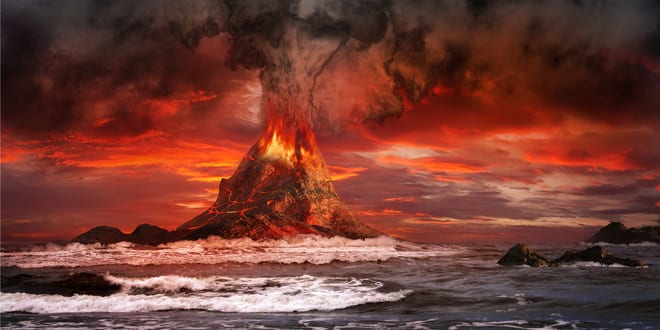 A group of researchers has discovered that the Yellowstone caldera, one of the most worrisome seismic hotspots in the world, has been unusually active in recent months as a result of magma filling up in the underneath chamber of the supervolcano. However, one Rabbi suggests there to be metaphysical factors connect the developments at Yellowstone with the conflict in Syria.

Geodesists David Mencin and Glen Mattioli had published test results they ran to monitor the strain on the subsurface rock of the caldera. Their data revealed significant deformation that they referred to as “a hiccup.” The researchers believe this was caused by an exceptional amount of magma flowing.

“The sudden episode of uplift was caused by an accumulation of hydrothermal fluids beneath the region,” they said.

“These independent observations agree with other instruments at Yellowstone like seismometers that indicate a zone of semi-molten rock starting about three miles beneath the surface.”

Mencin and Mattioli stated in their report that the measured volcanic strain is not dangerous,  concluding, “these findings are no cause for alarm.”

However, Rabbi Yekutiel Fish, author of the Torah blog “Sod Ha’ Chashmal” (the secret of the energy), believes that what is happening underneath Yellowstone is indeed troublesome and that it needs to be understood as being integrally connected to what is happening in the global political arena.

“All around the world, governments are becoming aggressive,” Rabbi Fish told Breaking Israel News. “This is even more true just to the north of Israel.”

Rabbi Fish referred to an incident on Saturday in which Israel and Iran made military contact for the first time which involved an Israeli F-16 being shot down. Also, US-led coalition troops killed several Russian nationals in Syria on Saturday.

“The situation in Syria is coming closer to what is described as the War of Gog and Magog, described in the sources as a war in the north in which all the nations are involved,” said Rabbi Fish. “But international conflict is not the entirety of the conflict that will bring Moshiach (Messiah). These political events need to be accompanied by changes in nature.”

The rabbi referred to a verse in Psalms.

Therefore we are not afraid though the earth reels, though mountains topple into the sea Psalms 46:3

Rabbi Fish cited an explanation on the verse from Rabbi David Altschuler, an 18th century Galician rabbi whose Bible commentary is known as the Metsudat David.

“The Metsudat David explains that in the war of Gog and Magog, half of the people who die will be killed in the war that will be fought between the nations,” he noted.

“The other half of the casualties will be caused by the natural disasters that are described as occurring in the end-of-days. Prominent among these disasters will be unprecedented earthquakes and volcanoes.”

Mencin and Mattioli’s findings come at a time when seismic activity at Yellowstone is particularly troubling. There have been three earthquakes at Yellowstone just in the last week, bringing the total since June to over 2,300.

Yellowstone is listed as one of the top volcanic hotspots in the world. An eruption of the supervolcano would have global implications. An estimated 87,000 people would be killed immediately and two-thirds of the United States would become uninhabitable. The large spew of ash into the atmosphere would block out sunlight,  resulting in an artificially long and intense winter worldwide.