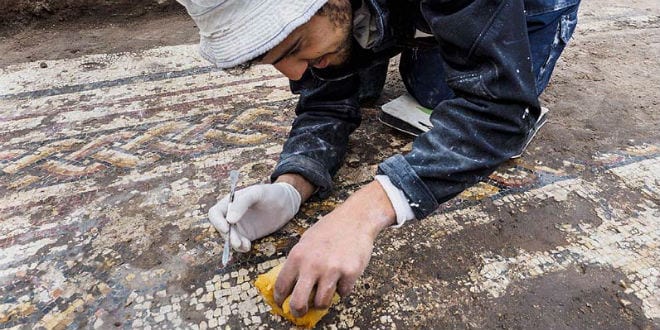 A rare and beautiful Roman mosaic from the 2nd–3rd centuries CE, bearing an inscription in ancient Greek, is being uncovered at the Caesarea National Park.

The dig uncovered part of a large, opulent building dating back 1,500 years to the Byzantine period. Scholars believe the building was part of an agora – a large public area for commerce and socializing. To the archaeologists’ surprise, under the imposing Byzantine-era structure they found a spectacular mosaic from an even earlier building dating back about 1,800 years.

Dr. Peter Gendelman and Dr. Uzi ‘Ad, directors of the excavation for the Israel Antiquities Authority, described the discovery: “This colorful mosaic, measuring more than 10.5 x 24 ft., is of a rare, high quality. It features three figures, multicolored geometric patterns, and a long inscription in Greek – which were all damaged by the Byzantine building constructed on top of it.”

“The figures, all males, wear togae and apparently belonged to the upper class. The central figure is frontal and the two others face him on either side. Who are they? That depends on what the building was used for, which is not yet clear. If the mosaic was part of a mansion, the figures may have been the owners. If this was a public building, they might have represented the donors of the mosaic or members of the city council.”

The mosaic was excavated during work by the IAA and the Caesarea Development Corporation throughout Caesarea National Park, in cooperation with the Israel Nature and Parks Authority. The excavations, by the IAA, are part of reconstruction work on the Crusaders-era entrance bridge to Caesarea. The project is part of the work on a promenade now under construction, led by the Caesarea Development Corporation, which will extend from the town of Jisr a-Zarqa to Caesarea National Park.

Jacques Nagar, head of the IAA Art Conservation Department, said that this rare mosaic was executed at a very high artistic level, of a type that can be found in places like Antioch in Turkey. The images were depicted using small, densely placed tesserae – with about 12,000 tiles per square meter. The IAA Conservation Administration is now working to make sure that the exposed parts of the mosaic are preserved and will not disintegrate over time. The area of the bridge is also being re-planned to make the mosaic assessable to the public.

Guy Swersky, deputy and acting chairman of the Edmond de Rothschild Foundation. Said in a statement: “Old Caesarea never stops surprising, fascinating and thrilling us, time after time revealing slices of history of worldwide significance. This amazing mosaic is a unique find in Israel. This is especially true considering where it was found – in the northern part of the park, in an area that has hardly been excavated.”

“It offers additional testimony to the importance of the unprecedented conservation and reconstruction project made possible by the Edmond de Rothschild Foundation, headed by Baron Benjamin de Rothschild and his wife, Baroness Ariane de Rothschild,” Swersky noted, adding that “the foundation’s enormous investment of over 100 million shekels (close to $30 million) enables expansion of intensive excavation to other areas in the Old City of Caesarea, and we are of course committed to continuing to unearth Caesarea’s hidden treasures.”

According to Swersky, “beyond the great historical and archaeological value of the new finds, there is their economic significance, in terms of upgrading the Israeli tourism product. The find adds even more momentum to the development that the Edmond de Rothschild Foundation has initiated and promotes in Caesarea and throughout the entire region.”

Michael Karsenti, CEO of the Caesarea Development Corporation, said that the excavation, conservation and unique restoration work in Caesarea is carried out with strict attention to preserving the archaeological, historical and natural elements at the site in all periods.

“In collaboration with our colleagues from the IAA and the Israel Nature and Parks Authority, we make sure to preserve every find in its natural place and are investing huge resources to make the site accessible to Israeli visitors and tourists from all over the world. Caesarea already provides one of the best and most exciting visitor experiences in the world, and as a result attracts more than 700,000 Israeli and foreign tourists every year. We are proud to note that Caesarea is one of the three most visited sites in Israel.”

“But we have no intention of resting on our laurels,” Karsenti said. “At the same time that we make possible the very intensive archaeological work throughout the park, the Caesarea Development Corporation, together with the Israel Nature and Parks Authority, is working to constantly upgrade the infrastructure at the site, including the establishment of a spectacular archaeological park, an advanced visitors’ center, visitor amenities and a delightful promenade that will begin at the ancient aqueduct (Aqueduct Beach) and link up to the promenade along the walls of Caesarea’s Old City.”

According to Karsenti, “this impressive mosaic joins the many other important recently unearthed archaeological finds: the altar of the temple built by Herod 2,000 years ago and mentioned by historian Josephus Flavius; a mother-of-pearl tablet etched with a seven-branched candelabrum, and the statue of a ram, which was a symbol of Christian congregation in the Byzantine period.”

Israel Hasson, director of the IAA, said in a statement: “I welcome the fruitful cooperation among all agencies responsible for the wonderful work in Caesarea. The work performed over the past few years will make this city’s magnificent heritage accessible to an even broader public and will restore Caesarea to its glory days as a thriving and cosmopolitan port city, rewarding all visitors with a rich cultural experience.”