Ingathering of the Exiles Tied to Rainfall – New Study

Home » Ingathering of the Exiles Tied to Rainfall – New Study 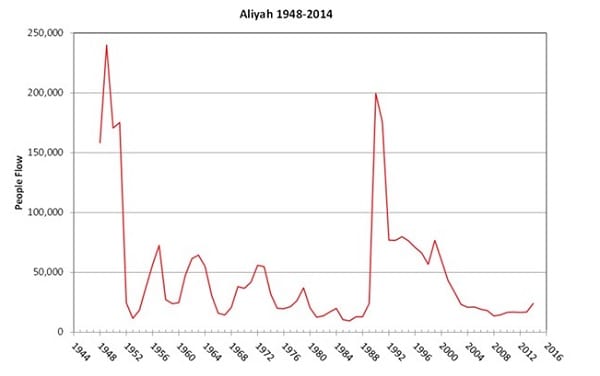 Is there a correlation between rainfall and Jews returning to Israel? Gary Auld, a retired Christian Australian mining engineer, used his spare time and expertise to answer this powerful question. After conducting an in-depth statistical analysis about three years ago, he concluded that there was undoubtedly a correlation.

“The annual rainfall in Jerusalem since the rebirth of the State of Israel, and aliyah (Jewish immigration to Israel, spiritually ‘going up’) over the same period, have similar trends,” Auld explained.

Auld used data from the Israel Meteorology Center in Jerusalem, which show that increased rainfall coincided with or preceded 1948 and 1991, two years in which there were massive numbers of Jews making aliyah. “The main thing is that this is not a cause-and-effect situation as we would generally consider it,” Auld told Breaking Israel News. “It is cause-and-effect but the cause is Hashem (God, literally ‘the name’).”

Auld’s analysis was corroborated by Hadas Saaroni, a climatologist at Tel Aviv University who provided the data. Saaroni confirmed that the data and methods used by Auld were correct, although she did not agree with his conclusion that there was a connection between rainfall and aliya. She considered them to be disparate and unconnected phenomena.

“The climatological analysis of the rainfall regime in Jerusalem is correct and nicely presented,” Saaroni wrote in response to Auld’s query. “However, I don’t think there is a causal correlation with immigration so the results shown cannot be explained, even partly by rainfall or climatic trends.”

Rabbi Avraham Arieh Trugman, director of the Ohr Chadash Torah Institute, holds that the connection between Man’s actions, a Jewish presence in Israel as well as rainfall is explicitly described in the book of Exodus.

If, then, you obey the commandments that I enjoin upon you this day, loving Hashem your God and serving Him with all your heart and soul, I will grant the rain for your land in season, the early rain and the late. You shall gather in your new grain and wine and oil. Deuteronomy 11:14

Rabbi Trugman wrote about the connection between rain and the actions of Jews in his commentary on the Bible “Orchard of Delights.”

“This correspondence hints on a deeper level to why rainfall in the Land of Israel is ultimately dependent on the fulfillment of Torah,” he continues.

“Rain (and all it symbolizes) provides the tools for both physical and spiritual survival; ultimately, though, ‘rain’ will only fall if the Jewish people first draw down upon themselves the spiritual blessings of the Torah by fulfilling the mitzvot. This will make them worthy of receiving the physical blessings of rain, which in turn will allow them the freedom to further devote themselves to their spiritual efforts.”

Rabbi Trugman believes that the connection between rainfall and aliyah is a definite sign that the era of the Moshiach (Messiah) is on the doorstep.

“Aliyah and the rainfall are both happening because it is time. As we approach the year 6,000 all of the prophecies are coming true,” Rabbi Trugman told Breaking Israel News. “But at the same time, we are also doing our part down below. Since the advent of the Messianic era will affect all humanity in essence Jews are making aliyah for all of creation.”

Rabbi Trugman believes that the return of the Jewish people to Israel and the desert turning green – and the connection between them – is a sure sign that the age of Moshiach (Messiah) is at hand, as predicted by all the prophets.

In that day, fresh water shall flow from Yerushalayim, part of it to the Eastern Sea and part to the Western Sea, throughout the summer and winter. Zechariah 14:8

“The prophet Zechariah teaches that in the future a river will flow out of the rebuilt Temple and sweeten all the waters in the world”, Rabbi Trugman explained in his book. “At that time physicality will become a perfect vessel for spirituality. Life-giving waters of material well-being and spiritual ascent will flow to the entire world from the Holy Land which will be transformed into an Orchard of Delights.”

Auld uncovered some additional correlations of his own.

“As amazing as the similarity in trends is, the interesting part is the section that has opposing trends,” Auld noted. “The rain came but the people didn’t.” This part of his study also revealed an unsurprising negative correlation between regional conflicts and aliyah: immigration to Israel dropped during wars and intifadas. Interestingly, his study showed slight increases in rainfall that corresponded to these periods of conflict. As the data shows, Israel’s major wars including the War of Independence in 1948 and the Six Day War of 1967, all correspond with a sharp uptick in rainfall. The connection between war and rainfall also seemed apparent to Rabbi Shimon Apisdorf, a Jewish speaker and award-winning author.

“The land of Israel is contrasted to Egypt, which is watered by the regular cycles of the Nile River. Israel, however, is completely dependent on rain,” Rabbi Apisdorf told Breaking Israel News.

“This makes our lives difficult but it is actually an enormous blessing. It draws our hearts towards prayer for our basic sustenance. The need to look towards God, the need for prayer, creates a relationship with God in a direct manner that people who always have their needs fulfilled never have.”

“Times and events like conflict create an immediate existential need, sometimes even a crisis, to emphasize this relationship,” the rabbi concluded.

For Auld, Hashem’s relationship with the people and the land of Israel will always be golden.

“I’m not exactly pro-Israel,’ he said. “I’m pro-Hashem and He makes it clear that He is a Zionist so who am I to argue?”