Bible-based Investment in Israel is ‘Tremendous Fit’ For Evangelical Christians 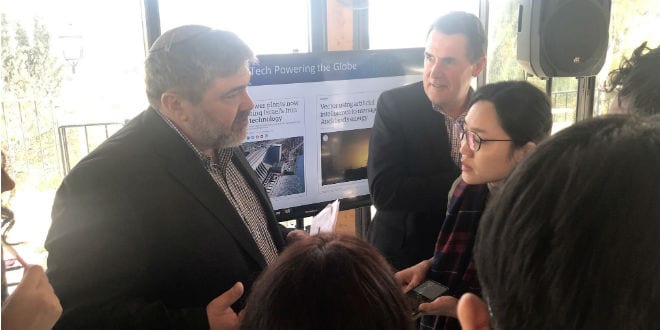 Investing in Israel’s start-ups is a “tremendous fit” for the Evangelical Christian investors whose relationship with the Jewish people and State is already strong based on shared values, according to Asher Abraham, OurCrowd’s Director of Global Investor Relations.

“When so many people want to see Israel destroyed, having a large community supporting Israel and the Jewish Nation, makes this relationship unique and important for Israel’s success,” Abraham said in an interview with Breaking Israel News.

“Additionally, Israel is very important for the global Evangelical Christian community, as we clearly see from their ongoing support in terms of tourism, philanthropic donations, investment, legislation, and lobbying,” Abraham added.

Based in Israel, OurCrowd is the leading global equity crowdfunding platform for investors and angel investors. Its annual Global Investor Summit brings thousands of visitors from over 90 countries to Israel.

The partnership between Israel and evangelical Christians is a natural one, said Abraham, who argued that both hold many shared values that further strengthen their relationship with each other.

“Both communities come from a common tradition of Judeo-Christian values that are based in the Bible,” he explained.

“We have more in common these days than what separates us – for example – traditional family values, or building businesses as a way to bring value to the world and improve it. We agree that establishing relationship-driven partnerships based on a transparency and honesty is what the Bible teaches us to do.”

Abraham also pointed to Biblically-mandated reasons behind the decision of many evangelical Christians to invest in Israel.

“Investing in Israel’s high tech sector is not just a great financial instrument that could yield financial rewards, but is also an impactful, value-based investment,” Abraham continued.

Investing in impact technology, he added, sustains Israel’s start-ups and economy while “saving lives and improving the world.”

“The Evangelical community is embracing value-based investing as a way to not only make financial returns but support Israel’s economy and help the Jewish Nation become a ‘light unto the nations’ through the technologies they create.”

Rabbi Tuly Weisz, Director of Israel365 and publisher of both The Israel Bible and Breaking Israel News, believes that “we are currently seeing a new era of Jewish-Christian relations.”

Jon Medved, Founder and CEO of OurCrowd, described the evangelical Christian community to be a “bedrock of support” for the Jewish State.

“I think that support for Israel should be bipartisan with liberals and conservatives, religious and secular, but there is no question that the Evangelical community has been the bedrock of support and we love them,” he told Breaking Israel News.

By financially investing in Israel over the past several decades, countless Evangelical Christians have embraced their Biblical mandate to bless Israel and in doing so, also challenge those who seek to undermine the legitimacy of the Jewish State through the boycott, divestment, and sanctions movement (BDS).

According to Abraham, BDS is not negatively impacting the high tech community since the movement only fuels the pro-Israel community to strengthen its relationship with the Jewish state.

“People are fed up with this type of hatred and look for new ways to invest and support Israel through successful Israeli startups,” he stressed to Breaking Israel News. “BDS often encourages even stronger investment and support.”

Abraham aspires to continue in his objective to transform the natural alliance between Jews and Evangelical Christians into close collaborative efforts to further build the thriving Israel’s hi-tech and venture capital industry.

“Investing in Israeli startups is now accessible to global investors and something a lot of Evangelical Christians should learn about,” he added.