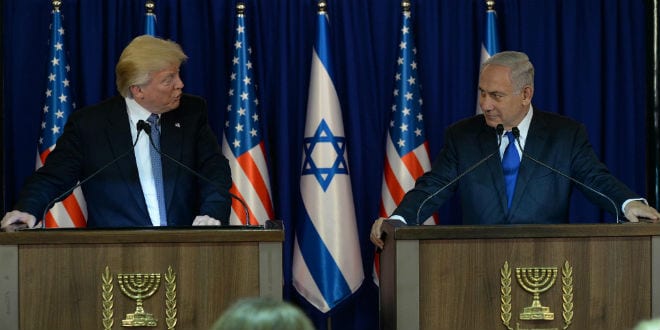 The Trump administration’s approach to the Palestinians represents what Mideast experts and Israel advocates are describing as a paradigm shift in Washington, D.C.—acknowledging that Palestinian rejectionism lies at the root of the Arab-Israeli conflict, rather than reflexively blaming the Jewish state for the impasse in negotiations.

The purported paradigm shift comes as the current Palestinian leadership is rejecting American involvement in the peace process. Palestinian Authority (PA) President Mahmoud Abbas said Sunday that President Donald Trump “took Jerusalem off the table” through the recent U.S. recognition of that city as Israel’s capital. Abbas declared, “We won’t take orders from anyone. We told Trump we will never accept his [peace] plan. His deal of the century is the slap in the face of the century, and we will not accept it.”

The PA leader vowed he would never give up on efforts to declare a Palestinian capital in Jerusalem, and described Israel as “a colonial project that has nothing to do with Judaism.”

Abbas was responding not only to Trump’s policy change on Jerusalem but to the American leader’s recent tweet questioning U.S. financial assistance to the PA. Trump had asked, “With the Palestinians no longer willing to talk peace, why should we make any of these massive future payments to them?”

In the 25 years since Israel and the Palestinians signed the Oslo Accords on the White House lawn, Palestinian terror attacks have killed more than 1,600 Israelis and injured thousands more. The most recent Israeli victim was 35-year-old father of six Raziel Shevah, killed in a drive-by shooting near his home on Jan. 9.

Illustrating a recent shift in American rhetoric on such incidents, U.S. Ambassador to Israel David Friedman tweeted following the attack, “Hamas praises the killers and PA laws will provide them financial rewards. Look no further to why there is no peace.”

“Dozens of Congressmen and Knesset members from across the political spectrum are embracing this new paradigm for ending this conflict and these steps…are welcome aspects of a new era in relations between the U.S. and Israel,” Member of Knesset Oded Forer (Yisrael Beiteinu) told JNS.

The “new paradigm” was also apparent last February—less than a month into the nascent administration’s tenure—when Trump broke with decades of unquestioned U.S. support for a two-state solution by saying at a White House press conference with Israeli Prime Minister Benjamin Netanyahu, “I’m looking at two states and one state. I am very happy with the one that both parties like.”

U.S. Rep. Bill Johnson (R-Ohio) told JNS that he is “encouraged by President Trump and the administration’s strong support for Israel. Recognizing Jerusalem as Israel’s capital is long overdue…This demonstrates a clear break from the Obama administration’s policy.”

Forer and Johnson are both leaders in their respective legislatures’ branches of the Israel Victory Project (IVP), an effort launched by the Middle East Forum (MEF) think tank with the goal of introducing a new approach to ending the Israeli-Palestinian conflict by supporting Israeli victory and Palestinian defeat.

Members of the Congressional Israel Victory Caucus and the Knesset Israel Victory Caucus recently signed a declaration affirming the need for the Palestinians to acknowledge the Jewish people’s historic connection to the land of Israel and to accept Israel as a Jewish and democratic state in order to end the conflict.

Palestinian journalist Daoud Kuttab has suggested that the Trump administration’s new approach appears to reflect ideas advocated by Dr. Daniel Pipes, founder and president of MEF and the initiator of IVP. Peter Beaumont and Julian Borger, writing in The Guardian, made the same implication.

Pipes told JNS, “The president’s recognition of Jerusalem as Israel’s capital is precisely in keeping with the Israel Victory Project: signal unambiguously to the Palestinians that their antiquated, rear-guard delusion of denying the Jewish state has failed. It’s hard to imagine a single more symbolic or important step than this one.”

Daniel Shapiro, who served as U.S. ambassador to Israel during the Obama administration, questioned the utility of declaring the Jewish state to be the victor in the conflict.

“I can understand the appeal for some Israelis and I can see why the idea would be satisfying in the first instance, but what happens the day after?” he told JNS. “The same challenges to Israel’s Jewish and democratic character will still be there…I think it doesn’t fundamentally change very much.”

In addition to recognizing Jerusalem as the Israeli capital last month, the Trump administration initiated plans to move the U.S. Embassy in Israel to that city, beginning the implementation of a U.S. law passed in 1995.

Shapiro is a vocal proponent of moving the embassy to Jerusalem. Nevertheless, he said a solution to the conflict “that gives Israel security, gives Palestinians self-determination and opens up Israel’s relations with the rest of the Arab world—to my mind, there is only one outcome that can achieve all these elements and that is a two-state solution.”

Meanwhile, Gregg Roman, CEO of MEF, said the think tank is “gratified to see not only a policy change in this American administration but a paradigm shift, away from the business of asking for incessant concessions from Israel and gaining nothing from the Palestinians.”

“It is vital,” Roman told JNS, “that [the Palestinians] accept defeat in their century-old conflict against the right of the Jewish people to self-determination and sovereignty.”