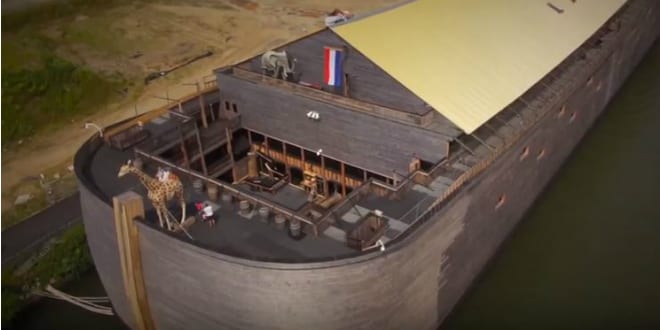 A nearly full-size replica of Noah’s ark broke free of its moorings in the Netherlands last week, drifting in the storm-tossed harbor and colliding with other vessels.

The ark’s current owner, Aad Peters, said that the strong winds tore the ark away from the boulders it was moored to in the fishing harbor of Urk. “We had fastened it properly as we‘re used to storms. I don‘t know how it managed to break loose,” said Peters.

The ark, actually a wooden structure on 21 steel barges, suffered minor damage but caused significant damage to a nearby ferry and several smaller boats. Seven people on the craft had to be removed by the Royal Netherlands Sea Rescue Institution (KNRM), while one rabbit and a pair of snakes were left on the boat to weather the storm. The errant ark was eventually towed back to its berth and reattached to the boulders.

Peters, a Dutch TV and theater producer, has been living on the ship for seven years. He runs the ark as a floating museum of sorts displaying pseudo-biblical artifacts. The displays are made up of puppets, animal hides and bones portraying scenes from the Old and the New Testament. Unlike the original ark, Peters’ version has no live animals, other than the now-seasick rabbit and snakes.

This is not the first time the ark has suffered a collision at sea. In June 2016, the ark collided with a Norwegian Coast Guard vessel in Oslo Harbor, causing severe damage to the wood cladding exterior.

The ark was originally built by Dutch building contractor, carpenter and Creationist Johan Huibers. At 390 feet long, 98 feet wide, and 75 feet high, Huibers’ creation is not quite as large as the original. Huibers and eight helpers worked four years at a cost of almost $5 million, completing the project in 2007. The ark can be towed by tugboats over the rivers but it is not seaworthy and transporting over open water requires riding atop a transport ship.

Huiber, a devout Christian, decided to build the ark after dreaming that a fierce storm-tide flooded the entire province of Nood-Holland in the Netherlands, his hometown. After becoming successful as a building contractor, Huiber was able to realize his dream.

In 2007 Huibers opened the doors to visitors. After a few months, the vessel was towed by tugboat through the canals and moored in 21 harbors in the Netherlands. The ark was sold to Peters in 2010, who successfully towed it across the sea from Denmark to Norway. Though several landlocked versions of the ark have been built, Huibers’ ark remains the only full size floating replica of Noah’s divinely commanded masterpiece.