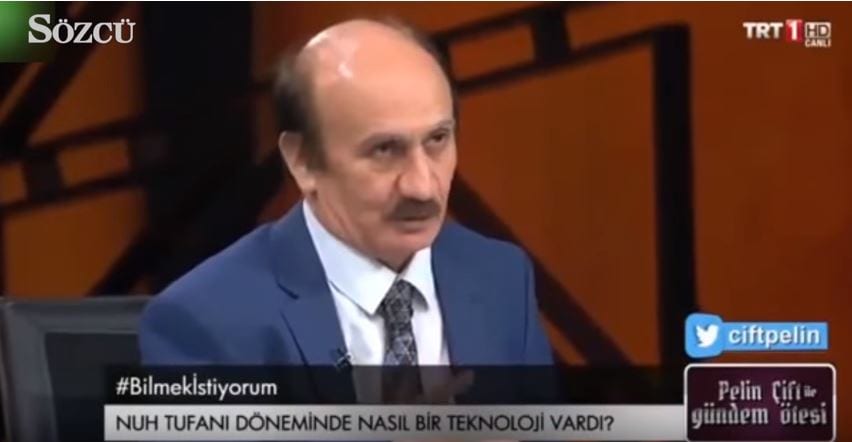 A Turkish professor has come up with an amazing theory about Biblical Noah based on his understanding of the story as related in the Koran: during the storm, conversation was impossible due to the thunder and lightning so Noah kept in touch with his sons via cellular phone. The professor reveals even more surprising details but the story is no joke and has become the focus of religious debate between secular and Islamic Turks.

Yavuz Ornek, a lecturer at the Marine Sciences Faculty of Istanbul University, was invited to speak on Turkish state-owned TRT television channel last Saturday on the subject of the flood story, which has an entire chapter of the Koran dedicated to it. In most respects, it is identical to the story as it appears in the Bible, but Ornek’s take on the story differed greatly from both versions.

Ornek was discussing the section of the Koran’s version of the flood story in which one of Noah’s sons, who was a disbeliever, refused to come aboard the Ark. The son climbed a mountain but as the floodwaters rose, he spoke to his father and repented.

“The Koran says the waves were as high as mountains, so if Noah spoke with his son, his son must be sitting on the top of another mountain,” Ornek said in the televised interview. “The Koran says they spoke, but to talk between two mountains with hundreds of kilometers apart, they must have had mobile phones, and Noah’s son must have boarded an aerial vehicle to reach his father.”

Ornek explained his theory, saying that technologies were much more advanced 10,000 years ago than most people realize. Noah, referred to as Nûḥ ibn Lamech ibn Methuselah  in the Koran, also used advanced technology to build an ark out of steel that was powered by nuclear energy. Ornek also claimed that instead of bringing live animals onto the ark, Noah stocked it with one male and one female egg from every living species.

“I am a scientist, I speak for science” Ornek added, giving his theories his academic seal of approval.

As bizarre as Professor Ornek’s claims may sound to Western ears, they were taken seriously by the Turkish public and became the focus of a fierce religious debate. Dr. Efrat Aviv, a specialist in Turkey for the Begin- Sadat Center for Strategic Studies and a lecturer in the department of Middle Eastern Studies at Bar Ilan University, was sure Ornek was serious about his theories, as were the listeners.

“To say something insulting about the Koran, even as a joke, could cost this man his life, so it is unlikely he meant it as anything other than serious commentary on the text.” Dr. Aviv told Breaking Israel News. “I watched the interview. He sounded very convincing and clearly believed in his theories. The professor went into great depth and detail, making fine distinctions in the text.”

“His theories were extreme by any standards, Dr. Aviv said. “Most of the Turkish people who reacted on social media had strong opinions, mostly rejecting his theories, but some people were very supportive and defended him.”

“If you can believe in such a story as a crazy as the flood then it should be no problem to believe that Noah spoke on a cell-phone,” the tweet read.

“There is a religious conflict going on in Turkey,” Dr. Aviv said. “Even though this professor did not intend for his statements to be anti-Islamic, the furor that is the result of the interview is becoming the expression of this conflict.”

The story of the ark is especially provocative in Turkey. The flood story is common to Judaism, Christianity, and Islam, but anthropologists believe it has much more ancient roots in stories like the Mesopotamian Gilgamesh Epic. Noah is considered an important prophet in Islam as one of the first sent to mankind. For Muslim Turks, this story takes on a much more important aspect since they believe the Biblical Mount Ararat, the final resting place of the ark, is actually Mount Nemrut in Turkey.

“This is a Muslim debate in Turkey but it is actually common to all religions,” Dr. Aviv said, summing up the conflict in universal terms. “This is the conflict between religion and science, and the question of what are the boundaries of belief.”