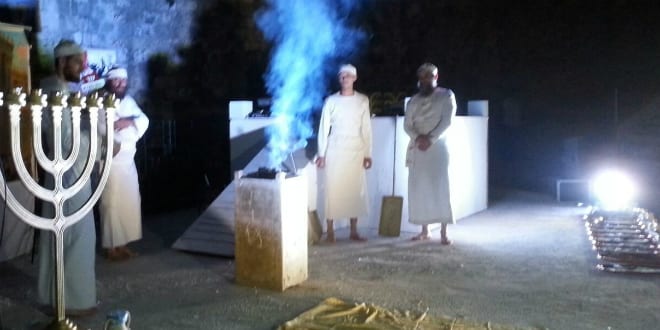 A scene straight from the Temple of Solomon was recreated on Tuesday evening when Kohanim lit the menorah, but even more wondrous than this sight was the fragrance that accompanied the event: for the first time in 2,000 years, incense was burned in the Biblically prescribed manner.

The Temple reenactment took place in the Gan Tekuma park adjacent to the Jewish Quarter inside of Jerusalem’s old city walls at 5:00 PM, just after sunset. The Kohanim (Jewish men of priestly descent) were dressed in priestly garments as described in the Bible.

A Hanukkah miracle was recreated on Tuesday night. The lighting of the Hanukkah menorah for eight days is based on the story of how, after defeating the Romans, the Maccabees conducted an exhaustive search of the Temple to find oil with which to begin lighting the Temple Menorah. They eventually found a single jug of oil, its purity ensured by the unbroken seal of the High Priest on its lid.

To replicate this aspect of the Temple described in the Hanukkah story, a special jug was made to hold the menorah oil. It was marked with a seal that had been created with the name of Rabbi Baruch Kahane, who has been educating other priests and acting in the role of the High Priest in many of the Temple reenactments.

This Temple reenactment was marked by a special event: for the first time ever, the Kohanim recreated the burning of the incense on the small golden altar as it was performed in the Temple.

He shall put the incense on the fire before Hashem, so that the cloud from the incense screens the cover that is over [the Aron of] the Pact, lest he die. Leviticus 16:13

The incense was prepared with one of the eleven Biblically mandated ingredients missing since it is forbidden to burn the actual incense outside of the Temple. Mordechai Persoff, head of Midrasha L’Ad Hamikdash and one of the organizers of the event, described the fragrance.

“The smell was very nice, something I have never before experienced,” Persoff told Breaking Israel News, quoting the Prophet Ezekiel who linked the incense with the return of the Jews to Israel.

When I bring you out from the peoples and gather you from the lands in which you are scattered, I will accept you as a pleasing odor; and I will be sanctified through you in the sight of the nations. Ezekiel 20:41

“The smell was sweet and pleasant, but the most surprising thing about the incense was the quantity of smoke it produced,” Persoff said. “The event was outdoors, so the smoke dissipated rather quickly. But when it was burned inside the Temple, it must have entirely filled the building.”

Only about one hundred spectators attended the event due to minimal advance advertising. Rabbi Hillel Weiss, the spokesman for the nascent Sanhedrin and one of the organizers of the event, was nonplussed by the small turnout.

“These reenactments are essential if the Third Temple is to be built,” Rabbi Weiss told Breaking Israel News. “Every time we perform these mitzvot (Torah commandments) we learn something new and practical about how they are done.”

‘Also, there is so much interest from people who were not able to attend, Israelis and from overseas,” Rabbi Weiss added. “This spiritual awakening is necessary for the Temple to be a House of Prayer for All Nations.”

The proceedings were led by Rabbi Yisrael Ariel, founder of the Temple Institute and a member of the nascent Sanhedrin.

The event was the product of a long process. Last month, olive oil was prepared in the Biblically prescribed manner.

Each olive was smashed with a hammer and placed in a basket and hung for several days to allow the oil to drip out. This also required implementing measures to ensure ritual purity as well.

Also, as part of the ongoing effort to bring the Third Temple, experts met at Bar Ilan University last month to perform an in-depth practical study of the Temple Oil, investigating which olives were best, which methods conformed to Jewish law, and many other aspects necessary to recreate this aspect of the Temple service.