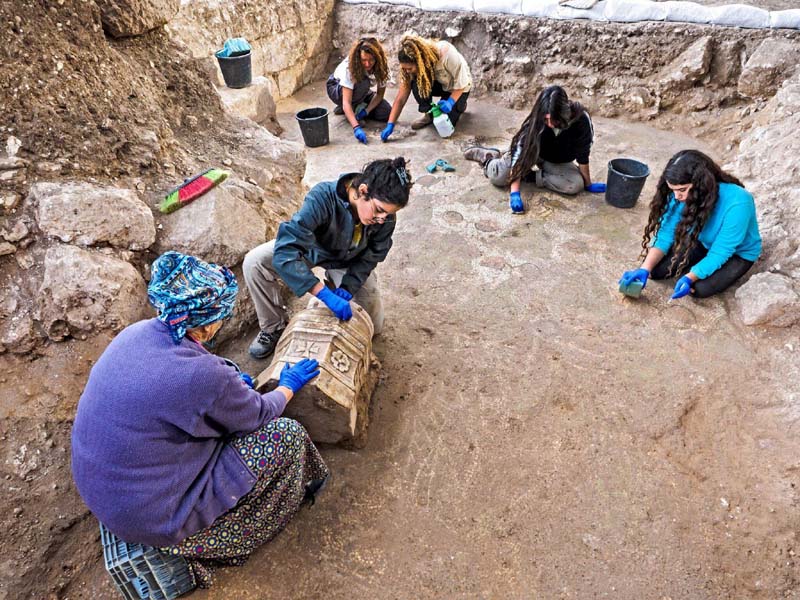 The spectacular remains of a 1,500-year-old (Byzantine Period) monastery and church decorated with mosaic floors and imported marble elements are currently being uncovered in large-scale excavations conducted by the Israel Antiquities Authority (IAA) in Beit Shemesh with the help of more than 1,000 teenagers.

The excavation is being conducted prior to the expansion of Ramat Beit Shemesh, funded by the Ministry of Construction and Housing, and implemented by the CPM Corporation managed by Anatoly Snider.

Benyamin Storchan, director of the excavations for the IAA, related: “We were surprised by the wonderful state of preservation of the ancient remains, and the richness of the finds being uncovered. The artifacts found in the large building, which seems to be a monastic compound, may indicate that the site was important and perhaps a center for ancient pilgrims in the Judaean lowlands.”

“During the excavation, we uncovered before our eyes the remains of walls built of large worked stone masonry and a number of architectural elements including a marble pillar base decorated with crosses and marble window screens,” Storchan said. “The marble artifacts were brought from the region of Turkey and further inland by wagon. In one of the rooms we uncovered a beautiful mosaic floor decorated with birds, leafs, and pomegranates.”

“We already know of a number of ancient churches and monasteries in the Judean lowlands,” Storchan noted, “but this one shows an outstanding level of preservation.”

To date, only a small portion of the monastery, abandoned in the 7th century CE, has been uncovered. Since the beginning of the excavation, over the summer, more than 1,000 teenagers from schools and pre-military academies participated in the excavation.

Hadas Keich, 16, a student at the Sde Boker Field School, said: “We searched for a way to fundraise for our class trip to Poland, and we decided to take part in the archaeological excavations. Little by little, we uncovered exciting finds here, which helped to connect us to our country and its history. It’s amazing what’s hidden here under our feet.”