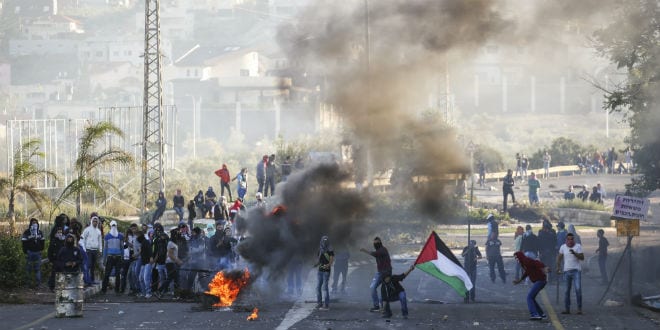 Support for violence against Israeli civilians has grown among Palestinians in recent months as the Palestinian street has increasingly come to view diplomacy as ineffective, a leading Palestinian pollster said Monday.

Dr. Khalil Shikaki, the director of the Palestinian Center for Policy and Survey Research (PSR), said that “44 or 45 percent” of Palestinians want to re-ignite the second intifada, compared to 34 or 35 percent three months ago. Speaking to reporters at a press briefing at the Jerusalem Press Club, Shikaki said that the Center’s Public Opinion Poll No (66), which was conducted from December 7-10 and included face-to-face interviews with 1270 adults in 127 randomly selected locations showed a growing number of people who support violence in order to achieve their political aspirations.

“[Since the beginning of a wave of stabbings and car ramming attacks in September 2015 … there has been a big increase in Palestinian support for violence, and in Palestinians’ belief that violence is more effective than diplomacy in helping Palestinians gain the end of occupation and building a Palestinian state,” Shirakawa said.

Shikaki added that religious beliefs, rather than socio-economic standing, serve as a major spark towards the belief in violence. Islamists and religious people are likely to support violence, whereas secular nationalists tend to oppose it. Overall, Shikaki said that whereas 10 or 12 years ago, only about one-third of Palestinians supported violence against Israelis, today that number has jumped to well over 40 percent.

“(Three months ago, about) 35 percent of the public believed that violence is the way to go. A similar percentage believe in diplomacy and the rest of non-violence. This survey shows an increase of at least one-quarter of those who say violence is the way to go, a return to an armed intifada as the best means of ending the occupation and building a Palestinian state. Today, this number is approximately 44-45 percent. That’s a significant increase,” Shikaki said.

Predictably, young people in the 18-25-year-old age bracket were more likely than their parents to support violence, both because they are too young to remember the destruction of the second intifada, and also because the vast majority of their information comes from social media, rather than from state-run television or newspapers.

“I don’t think I have to tell you how poisonous social media can be as a source of information,” Shikaki said.