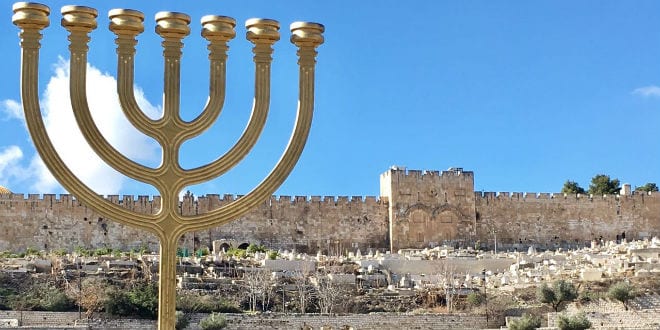 Experts involved in bringing back the Temple service are convinced that should the opportunity to light the menorah and begin sacrifices suddenly present itself, all of the elements would be ready– perhaps even more so than they were for the Maccabees almost 2,000 years ago.

However, they also agree that the key element, not explicitly mentioned in the Torah and not actually a physical item, is conspicuously missing, preventing the light of the Temple from returning to the world.

After a three-year guerrilla war against the Romans, the Maccabees rededicated the Second Temple in 165 CE, signifying the event by lighting the Menorah and bringing a kosher sacrifice. For them to do so, the Temple had to be prepared. The altar, defiled by sacrifices of unkosher animals to pagan gods, needed to be replaced, as did the gold menorah and all of the precious vessels which had been plundered. The Maccabees succeeded and their achievement is commemorated with the holiday of Hanukkah, which literally means ‘inauguration’.

When asked if the Maccabees’ spontaneous Temple service could be duplicated today, Rabbi Yisrael Ariel, a member of the nascent Sanhedrin and founder of the Temple Institute, answered emphatically in the affirmative.

“Everything we need is ready,” Rabbi Ariel told Breaking Israel News. Given the total lack of a Temple structure, the rabbi’s claim required some substantiation. “An actual Temple is not needed. An altar can be constructed at the site of the original altar on the Temple Mount.”

The rabbi explained that the stones to construct a new altar stand ready in the Temple Institute. Rabbi Ariel checked off an exhaustive list of the additional equipment and personnel required for the holy undertaking: a menorah, a small gold altar for incense, a large stone altar, priestly garments, oil, incense, wine, and other assorted vessels and musical instruments. Rabbi Ariel stated that all of these items stand ready in close proximity to the Temple Mount.

“Compared to the Maccabees, we are far more prepared,” Rabbi Ariel said. “If we were told to begin the Temple service, we could be lighting the menorah and burning sacrifices in four hours.”

He stated that there are currently fifty Kohanim (Jewish men of priestly descent) who are thoroughly trained in the Temple service, several of whom are suited to serve as the Kohen Gadol (high priest).

Rabbi Hillel Weiss, the spokesman for the nascent Sanhedrin, explained that even the rededication by the Maccabees was made simpler by certain lenient aspects in Jewish law that would still be relevant for a modern attempt to jumpstart the Temple service.

“The Maccabees began the Temple service with a menorah made of simple iron bars,” Rabbi Weiss told Breaking Israel News. “Though that is not the ideal, [it]  is permitted by Jewish law. [Even so,] we would not have to rely on that leniency since the Temple Institute has a gold menorah on display just a few hundred yards from the Temple Mount.”

Rabbi Weiss explained that the United Temple Movements and the Temple Institute have a small quantity of oil prepared according to the strictest standards of Jewish law– enough to begin lighting the menorah but not enough to provide the Temple needs for much longer than that. Even if the little oil available today is not sufficient, continuing to light the menorah would not require a re-occurrence of the eight-day miracle.

“The Maccabees searched for an undefiled jar of oil for the menorah and were rewarded with a miracle; one small jar that lasted eight days,” Rabbi Weiss said. “But according to the halacha (Torah law), they could have used plain oil.”

Even with the leniencies, other potential obstacles need to be addressed. One of the major obstacles in performing the Temple service is the fact that everyone today is considered ritually impure and the means of purification, the ashes of the Red Heifer, have yet to be prepared.

This is the ritual law that Hashem has commanded: Instruct B’nei Yisrael to bring you a red cow without blemish, in which there is no defect and on which no yoke has been laid. Numbers 19:2

Rabbi Ariel emphasized that even this is not what is preventing the Temple service from being reinstituted.

“Much effort should be put into fulfilling this Torah commandment but if it is impossible, ritual impurity does not preclude bringing a time-bound public sacrifice, such as the twice-daily sacrifices, or lighting the menorah,” Rabbi Ariel explained.

“We certainly have everything required to begin the Temple service,” Fried told Breaking Israel News. “It is all prepared and ready to be brought up to the Temple. We are currently more prepared for the Temple service to an even greater extent than the Maccabees but they had one thing we lack: the will of the Jewish nation.”

Fried emphasized that the Torah goes to great lengths to instruct the Jews in performing the Temple service and should, therefore, be as much a part of religious observance as the other mitzvot.

“This is the mitzvah that brings us together as a nation, and until we do that, it is impossible to perform the Temple service,” Fried said. “There are many Jews who are ready to begin this but this can’t be successful if it is just a splinter group. The Maccabees had that and we do not. In a very real sense, the Jews coming together was the real miracle of Hanukkah.”