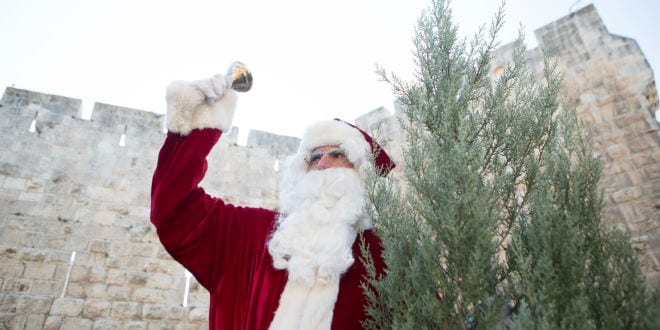 Ali Salam, the Muslim mayor of Nazareth, decided to revise his decision from Thursday when he announced he would cancel public celebrations of the Christian holiday of Christmas in protest to US President Donald Trump’s acknowledging Jerusalem as Israel’s capital.

At a press conference Thursday, Salam described Trump’s decision as “wretched”, saying that Trump had “stabbed” Palestinians with the announcement.

“Our identity and faith aren’t up for debate,” Salam said. “The decision [by Donald Trump about Jerusalem] has taken away the joy of the holiday, and we will thus cancel the festivities this year.”

“Our message is we love Jerusalem, we’ll never abandon you under any circumstances,” Salam said to the press. Though Nazareth is the largest Muslim-majority city in Israel with 70 percent of its residents being Muslims, it is revered by Christians as the place where Jesus’ mother was told by an angel she would have a child. It is also the city where Jesus grew up.

In his speech to the media, Salam noted the economic impact of this status on the city.

“There are commercial interests of the city and we are used to hundreds of thousands coming for this season,” Salam said.

Most media understood the announcement to be a declaration that all city-sponsored celebrations would be canceled but a subsequent announcement from the municipality clarified the mayor’s announcement.”The cancellation only applies to artistic performances on stages”, the statement read. It also stated that outdoor stalls would be opened, the lighting of the Christmas tree will take place Sunday as scheduled, programs in the old city will proceed, and a parade will be held on December 23.

“Christmas season in Nazareth is the season of good and blessing and we are completely vigilant that commercial interests won’t be damaged,” the statement concluded.

Salam told Reuters news service on Saturday, “I don’t know why people thought there would be cuts to the celebrations. Everything except for three singers who will not be coming will be held as normal. We have already welcomed 60,000 people to the city today.”