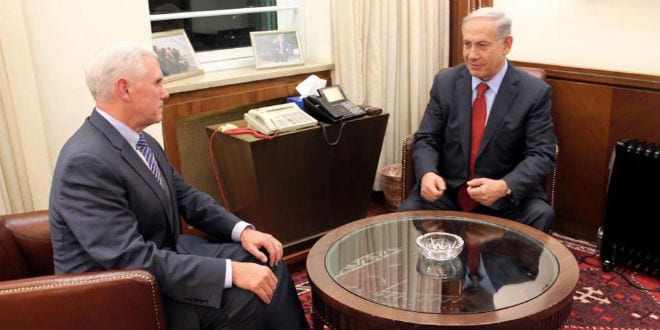 After a delay in his scheduled first trip to Israel, US Vice President Mike Pence will arrive at in Israel on Wednesday, traveling directly from Ben Gurion Airport to the Western Wall in Jerusalem.

VP Pence was scheduled to arrive in Israel on Sunday but this visit was postponed in order to allow him to participate in the Senate’s vote on a Republican tax bill on Sunday.

On Thursday, he will meet with Prime Minister Binyamin Netanyahu and then speak at a special session of the Knesset which will be held in his honor.

On Friday Pence will meet with President Reuven Rivlin and visit the Yad Vashem Holocaust Museum in Jerusalem. He will then leave Israel for a visit to Germany.

The vice-presidential Holy Land visit comes at a sensitive time. Last week, President Donald Trump cause a global storm when he acknowledged Jerusalem as Israel’s eternal capital. The president emphasized that his announcement was intended to jump-start renewed negotiation so it did not specify the actual borders of Jerusalem. Nonetheless, the Palestinians responded by declaring a day of rage.

Last Saturday, Majdi al-Khaldi, an aide to Palestinian Authority President Mahmoud Abbas, announced that Abbas will boycott the vice-presidential visit. PA official Jibril Rajoub said on Thursday that Pence was “not welcome in Palestine”, referring to Area A, regions in Israel that are currently under Palestinian civil administration. In a baffling criticism of President Trump’s move, Abbas said that such rhetoric has “prevented peace for decades.”

The White House responded with a statement that VP Pence was still planning on meeting with representatives from the PA and warned that canceling the meeting would be “counterproductive.”

This vice-presidential Western Wall visit will echo President Trump’s visit in May when he became the first sitting president to visit the site, but Pence is no stranger to the holy site. As governor of Indiana, Pence visited the Western Wall during a nine-day visit to Israel. He also met with Israel Prime Minister Benjamin Netanyahu at that time.