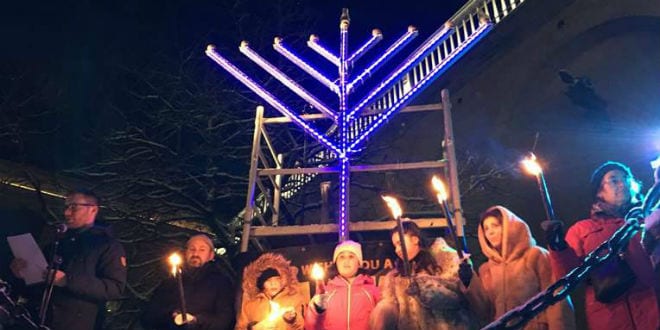 From the Far East to the Americas, Chabad has erected public menorahs as part of the Chabad-Lubavitch Hanukkah campaign in more than 100 countries and territories, including all 50 US states.

Some 15,000 oversized menorahs are kindled each night of Hanukkah in front of landmarks such as the White House, Mount Rushmore, Trafalgar Square, the Eiffel Tower, the Brandenburg Gate and the Kremlin.

The concept of lighting a menorah in a way that allows the public to see it is rooted in the halachic (Jewish law) requirement to publicize the Hanukkah miracle. In ancient times, menorahs were lit outside Jewish homes to that end.

The concept of lighting a large menorah in public was initiated by the Lubavitcher Rebbe, Rabbi Menachem M. Schneerson of blessed memory in 1973, when he announced his Hanukkah-awareness campaign, encouraging his movement’s emissaries to reach out to their fellow Jews and give them the opportunity to kindle the Hanukkah lights.

That year the movement distributed about 60,000 tin menorahs. In 1974, one of Rabbi Schneerson’s senior emissaries, Rabbi Abraham Shemtov, kindled a menorah at the foot of the Liberty Bell at Philadelphia’s Independence Hall. In 1975, promoter Bill Graham sponsored Chabad’s public menorah in San Francisco.

Since then, the concept of public menorahs has expanded, to the point where, in 1979, President Jimmy Carter invited Rabbi Shemtov to light a public menorah erected by Chabad outside the White House.

Click here for a compilation of public menorah images, care of Chabad.org.