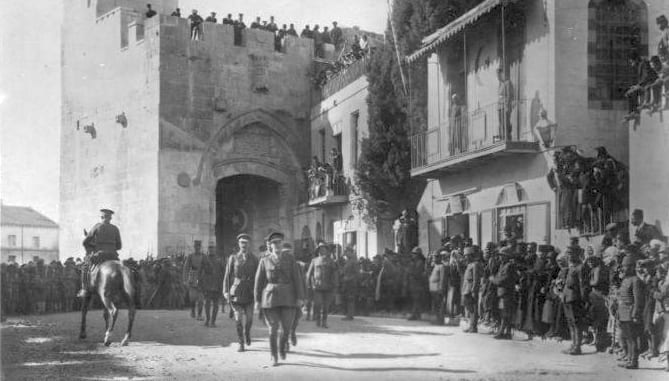 One century ago, on December 9, 1917, the first night of Hanukkah and two weeks before Christmas, the British Imperial Army entered Jerusalem under the command of General Shea.  Jerusalem fell to the British in an event often deemed a “Hanukkah and Christmas miracle.” Two days later, on December 11, General Allenby read the proclamation announcing British rule on the steps of the Citadel. The event ushered in a new era in the history of Jerusalem – for Jews, the beginning of the fulfillment of a Biblical promise of Jewish revival and sovereignty over their holy land; for Christians, a return of Christian rule for the first time since the fall of the Crusader Kingdom of Jerusalem.

It was Allenby’s establishment of British rule over Jerusalem that eventually led to the founding of the State of Israel under the British Mandate.

“Jerusalem became a holy city again,” explained Dr. Nirit Shalev-Khalifa, a curator of the Tower of David Museum’s special exhibit commemorating General Allenby. To honor the centennial of the event, the museum featured a festive reenactment and opened a new exhibition at the museum.

Eilat Lieber, the Director and Chief Curator of the Tower of David Museum, called Allenby’s dramatic entrance to Jerusalem, marking the end of a 400-year Ottoman rule, an event that “shaped our city.”

The show reenacted the moment when, just a little more than a month after the Balfour Declaration was signed, on December 11, 1917, General Allenby stood on the steps of the Tower of David, proclaimed British marital law, and accepted the keys to Jerusalem along with Major General Shea.

Allenby’s proclamation, which was issued in seven languages, promised a different world with new values and order following Jerusalem’s thousands of years of crisis, as well as epidemics and famine inflicted during the Great War. British military law provided Jerusalemites with supplies of food and water, established the collection of taxes, renewed postal service, and introduced British coinage.

Moreover, Allenby recognized the uniqueness and importance of Jerusalem, promising protection for Jerusalem’s holy sites and freedom of worship, religion, and tradition for the city’s inhabitants.

At the museum reenactment, which featured readings of the proclamation in several languages, Jerusalem Mayor Barkat lauded General Allenby as a “liberator of Jerusalem.”

“General Allenby was a great military man who conquered the land of Israel, but in addition to his military strength, he was also a distinguished thinker and understood the city of Jerusalem and its role in the world,” said Barkat. “He understood that Jerusalem has unique properties as a uniting force for the entire world, open for all tribes, as represented here in the ceremony.”

Barkat continued, “Allenby was an essential part of Jerusalem’s history, ensuring the city could fulfill its role in the world as a place where religious tolerance and mutual respect are our highest values. The city of peace as General Allenby described represents our aspirations for the city today and into the future.”

According to The Palestine News following the proclamation, that night, Church bells rang throughout Europe and special prayers were held in synagogues. The Jewish neighborhoods of Jerusalem were lit up with the first candle of Hanukkah as people danced joyfully by their menorahs, seen from every window.

The sages refer to Jerusalem as “the light of the world,” and Israel, the “light unto the nations.” The menorah, a special candelabra used in the Temple, is said to emanate such light. It is also a Hanukkah symbol and the emblem of Israel, representing the Jewish people’s historical attachment to their homeland and Israel’s return to its former luster.

After Allenby’s proclamation, the Jews of Palestine referred to the English as the Hasmoneans, the Jewish dynasty that ruled Israel after the successful Maccabean rebellion against the Greek Empire which was the backdrop of the Hanukkah story. They likened General Sir Allenby to Judah Maccabee, the Jewish priest who led the Maccabean Revolt.

Also present at the reenactment were John Benson, the great grandson of Major General John Shea; Henry J.H. Allenby of Megiddo and Felixstowe, the great-great nephew of Field Marshal Edmund Allenby; and Sarah Viscountess Allenby, the current Lord Allenby’s mother and the wife of third Viscount.

Each guest expressed pride and emotion in their ancestors for their role in shaping the history of Jerusalem. “I’m so glad I got to come here to absorb it all,” said Allenby, in Jerusalem for his first visit to Israel.

“There is a great passion here in Israel for what happened,” he said.

Benson, also in Israel for the first time, said it had been an emotional visit. Benson’s great-grandfather, who was instructed to take Jerusalem as a “Christmas present for Britain,” stood with General Allenby on the Tower of David steps after the Ottomans surrendered the city to him.

“The warmth of welcome here has been very moving, and it is humbling to be here and be part of it. This is part of our family and we are enormously proud to play a part of the history of this wonderful city,” Benson concluded.