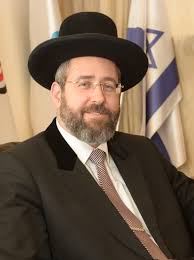 Due to a dangerous drought in Israel, Chief Rabbi of Israel Rabbi David Lau released a proclamation on Sunday calling on the public to offer special prayers for rain in Israel.

“The month of Kislev has come and Israel hasn’t yet been blessed with rains, therefore I call upon the public, first to be compassionate with one another, and then to begin adding the special prayer for rain that is said when there’s a drought,” the rabbi said in an official statement.

“In the days of Rabbi Tanhuma, all of Israel fasted [in times of drought],” Rabbi Lau said, referring to an account given in the Talmud, or Oral Torah. “Rabbi Tanhuma admonished them, saying, ‘My children, be charitable unto each other, and God will be merciful unto you.’”

Rabbi Tanhuma’s story ends in triumph, with God sending rain after one individual, moved by the rabbi’s words, gives charity to his ex-wife.

The office of Rabbi Lau stated that this call for prayer was universal, including Christians as well as Jews.

“This is a call for Jews around the world to pray for Israel and, of course, includes non-Jews,” Pini Tenenboim, Rabbi Lau’s spokesman, told Breaking Israel News. “Anyone who cares for Israel should join together and pray for rain.”

Rabbi Dov Stein, secretary of the nascent Sanhedrin, emphasized that prayer for rain in Israel is a universal proclamation that was implicit in the construction of the Temple of Solomon.

“It is praiseworthy for non-Jews to pray to Hashem (God), and even more so when they are praying for the sake of Israel,” Rabbi Stein explained to Breaking Israel News. He noted that in the section of Kings in which King Solomon is consecrating the Temple, he declares it to be a place of prayer in times of drought.

Should the heavens be shut up and there be no rain, because they have sinned against You, and then they pray toward this place and acknowledge Your name and repent of their sins, when You answer them. I Kings 8:35

“Directly after King Solomon describes prayers and repentance as the way for Israel to cope with drought, he asks Hashem to hear the prayers of the non-Jews,” Rabbi Stein pointed out.

Oh, hear in Your heavenly abode and grant all that the foreigner asks You for. Thus all the peoples of the earth will know Your name and revere You, as does Your people Yisrael; and they will recognize that Your name is attached to this House that I have built. I Kings 8:43

“Every person needs to pray to Hashem from is heart, in the simplest possible language,” Rabbi Stein implored. “For this we were created, for this we were given the ability to speak.”

Indeed, some Christians are already praying for rain. Bridges for Peace, a Christian organization that supports Israel, publishes a weekly list of current events that require special focus for prayer. In its most recent prayer list, released on Friday, it included a special note asking members to pray for rain for Israel.

Three years earlier, a two-month drought led the Chief Rabbinate to call for a two-day fast in addition to the public prayers. Not long after, almost eight inches of rain fell in one rainstorm and the year ended with rainfall nearing the annual average.

In his recent statement, Rabbi Lau requested that people recite Psalm 130, which is traditionally said in times of drought.

A song of ascents. Out of the depths I call You, Hashem. O Hashem, listen to my cry; let Your ears be attentive to my plea for mercy. If You keep account of sins, Hashem, Lord, who will survive? Yours is the power to forgive so that You may be held in awe. I look to Hashem; I look to Him; I await His word. I am more eager for Hashem than watchmen for the morning, watchmen for the morning. O Yisrael, wait for Hashem; for with Hashem is steadfast love and great power to redeem. It is He who will redeem Yisrael from all their iniquities.