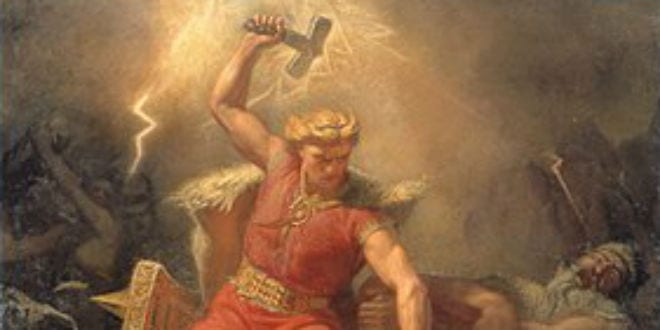 “On that day, men shall fling away, to the flying foxes and the bats, the idols of silver and the idols of gold which they made for worshiping.” (Isaiah 2:20)

As the pagan Norse religion makes a roaring comeback in Iceland, the Asatru Society is expected to finish construction of a new temple – the first structure dedicated to the Norse god Odin in over one thousand years.

The Icelandic Ásatrú religion follows the belief systems of the Old Norse religion, or Germanic neo-paganism. The followers worship the ancient Norse gods such as Ódin, Thor and Freyja.

There have been no temples to the Norse gods in Iceland for over 900 years, but in 2015, the Ásatrú Society, re-established in 1972, began construction on a modern temple in Reykjavík, the capital of Iceland. It is expected to be ready for use sometime this summer at a final cost of around $1.25 million.

The pagan religion is making a comeback in Iceland, necessitating the construction of the new facility. Established 45 years ago by farmer Sveinbjörn Beinteinsson, the Ásatrú Society initially had 12 members. According to the National Bureau of Statistics in Iceland, there were 2,382 members in 2014; today there are 3,583 members.

“I think more people are seeing what we’re doing and they like it,” said Hilmar Örn Hilmarsson, current High Chieftain and director of the Ásatrú movement, in an interview in Iceland Monitor. “We do not recruit members. We just encourage people to come if they are interested.  Our ceremonies are open to everyone.”

There may be another reason for the rise in Ásatrú popularity. Unlike the mainstream Lutheran church that most Icelanders attend, the Icelandic version of neo-paganism promotes same-sex weddings.

“There has been a massive increase in demand for same-sex wedding ceremonies in the last year, an explosion really,” Hilmarsson said in an interview in Gay Iceland, noting that many foreign citizens visit Iceland specifically to be married in his pagan service. “The pagan belief is very inclusive and we are open to all opinions, so we welcome all, gay or straight, Icelandic or foreign.”

Hilmarsson is optimistic and believes that once the new temple is complete, interest in the Norse gods will flourish.

“Since the younger generation is gradually turning away from [established] religion,” he said, “I think our growth will continue, for many years to come.”

Asatru has its roots in Germanic paganism and bears many similarities to other forms of idolatry. Its adherents worship a pantheon of gods. Just as biblical paganism has a strong aspect of divination, runes play an important role in the Norse religion.

As seen in the bellicose Viking culture, war was ritualized and the slain enemies became sacrifices to the Norse gods. It is likely that human sacrifice was part of Norse paganism but nothing suggests that it was part of common public religious practise. Instead it was only practised in connection with war and in times of crisis.

The major holidays revolved around the changing seasons, with Yule being the most important, celebrated in late December and continuing for twelve days.

Norse paganism went mainstream in 1962 when Marvel Comics began publishing a comic book series featuring the god Thor and other characters from the Norse pantheon. In 2011, Marvel Studios and Paramount Pictures released the movie “Thor”, based on the comic book. That was followed by two more movies, the most recent, “Ragnarok”, based on Norse eschatology.

In Norse mythology, Ragnarok refers to a series of apocalyptic events, including a great battle resulting in the death of the gods, natural disasters, and the subsequent submersion of the world in water.