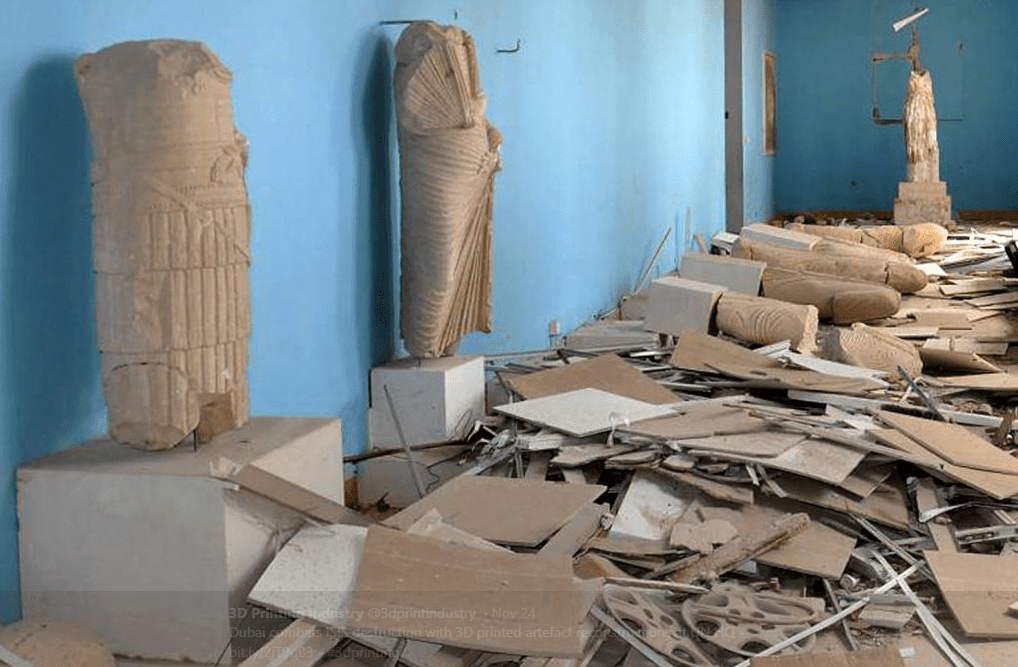 The same multinational group that recreated the Palmyra Victory Arch and sent it on a world tour has now recreated a statue of Athena, the Greek goddess of war, for an exhibit in the United Nations, an organization that claims to be working towards world peace but which one rabbi likens to modern-day paganism.

The United Arab Emirates (UAE) officially inaugurated the Digital Archaeology Exhibition, “The Spirit in the Stone”, at the United Nations’ headquarters in New York City last Thursday. The UAE, the Italian mission to the UN, and the Institute of Digital Archaeology (IDA) cooperated in re-creating a statue of the Greek goddess Athena for the exhibit.

Today, at the @UN Headquarters in New York, we unveiled a historic artefact from Palmyra that was revived using advanced technology after being destroyed by extremists. This artefact would have been lost forever if not for the efforts of the UAE in saving humanity’s shared past pic.twitter.com/2q9WJAORyi

The original Athena statue stood in Palmyra, Syria, until it was destroyed by ISIS in 2015. The UAE announcement described the goddess as “synonymous with reason, refuge and the rule of law, all of the same values on which that historic institution was built,” but the statue depicts Athena in her classic pose grasping a spear, belying her prominent role as the Greek goddess of war.

It is also believed that the Greek goddess Athena was based on the earlier Mesopotamian goddess Ashera and was later incorporated into early Islam as al-Lāt, worshipped in Saudi Arabia as the consort of Allah mentioned in the Koran. This would be consistent with the statue’s history at the site in Palmyra, which was used as a temple by the Mesopotamians, Romans, and Muslims in succession.

Rabbi Elad Dokow, the head rabbi and lecturer at Israel’s Technion Institute of Technology, was not surprised that the United Nations would feature a display of pagan symbols.

“There is currently an unmistakeable rise of paganism and idol worship in the world, more than any other religion, and it is naive to believe this display is disconnected from this phenomenon,” Rabbi Dokow told Breaking Israel News. “Paganism creates the ability for each man to create his own truth, as opposed to Judaism and Christianity, which state that there is an objective truth man must abide by. The UN, like paganism, is a place of subjective reality created by a vote.”

“What we are seeing in the world today is that every place Christianity grows weak, paganism and idolatry grow stronger, and where Christianity disappears, horrible things happen.”

Though an initiative bringing together the Muslim-majority UAE with Italy to recreate a Greek pagan idol seems incongruous, just such a union was described in Jewish prophecy, first alluded to in Psalms.

For they have consulted together with one consent; against Thee do they make a covenant; The tents of Edom and the Ishmaelites; Moav, and the Hagrites. Psalms 83:6-7

The first century Jewish sage Jonathan ben Uzziel described how this Biblical alliance between Ishmael and Esau would reappear in war at the End of Days.

“Great ships full of weapons will depart as a large fleet from Roman Italy and will join up with a legion that will depart from Constantine [this is Ishmael]. They will harm the inhabitants of other lands, and subjugate the descendants of Eber [a reference to Israel].”

The UAE has worked with the IDA in the past. Their first collaboration, the 3-D printed Arch of Palmyra, was prominently featured in the UN exhibit as a full-size projection onto a screen. The original Arch of Palmyra was a Roman victory arch that stood for 1,800 years in front of the temple to the pagan god Ba’al in Palmyra until, like the statue of Athena, it was destroyed by ISIS.

Ba’al was the form of idol worship frequently mentioned in the Bible as accompanying the worship of the female false goddess, Ashera.

They rejected all the commandments of Hashem their God; they made molten idols for themselves—two calves—and they made a sacred post [Ashera] and they bowed down to all the host of heaven, and they worshiped Baal. II Kings 17:16

Similar to the current display of Athena at the UN, the Palmyra Arch was also displayed at events associated with a world government. It was the centerpiece of the World Government Summit in Dubai last February, and appeared in Sarona, Italy in June, its display intentionally coinciding with the the G7 Summit of world leaders.