Discovery of 1,500-Year-Old Byzantine Church May Lead to ‘Lost’ City of Ashdod-Yam

Home » Discovery of 1,500-Year-Old Byzantine Church May Lead to ‘Lost’ City of Ashdod-Yam 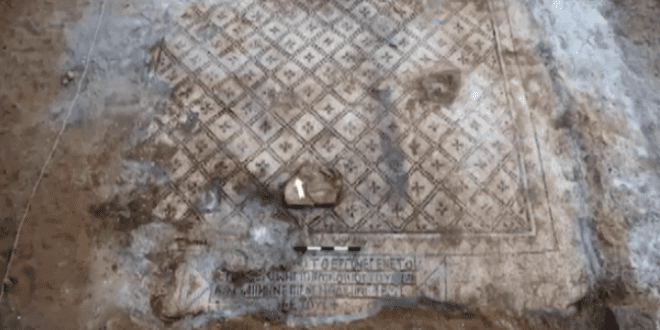 The remarkably preserved ruins of a 1,500-year-old Byzantine church or monastery floor were discovered during an excavation in the coastal city of Ashdod. Archaeologists believe that the finding has revealed the location of the ancient Roman-Byzantine city of Ashdod-Yam.

The main find at the site was a sophisticated color mosaic floor which includes a Greek inscription dedicating the building to a prominent bishop in the sixth century.

“[By the grace of God (or Jesus)], this work was done from the foundation under Procopius, our most saintly and most holy bishop, in the month Dios of the 3rd indiction, year 292.”

It is the first time use of the Georgian calendar has appeared in an excavation in Israel, said Hebrew University’s Dr. Leah Di Segni, who deciphered the inscription. The Georgian year 292 corresponds to 539 CE on the Gregorian calendar.

Ashdod-Yam (Ashdod by the Sea) is known in classical sources as Azotos Paralios. One of the most important coastal cities in Israel during the Byzantine period, it is shown in the Madaba Map – a 6th century CE mosaic map of the Middle East found at Madaba, Jordan – as a flourishing town with buildings, churches and a street flanked with colonnades.

A sister city to Biblical Ashdod, which stood a few kilometers inland to the north, Ashdod-Yam was originally an outpost but became its own entity during the Iron Age. In the Byzantine period, Ashdod-Yam expanded into a city known as Azotos Paralios. According to Haaretz, the location and extent of the expansion had remained unknown until present day.

Dr. Alexander Fantalkin of the Tel Aviv University institute of archaeology, who co-headed the expedition, believes the ruins of the ancient city are “waiting beneath the dunes” on the outskirts of the modern Israeli city of Ashdod.