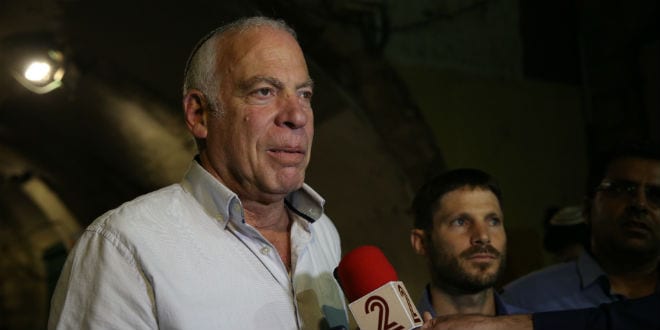 Prime Minister Benjamin Netanyahu declined to address reports Sunday that US President Donald Trump is planning to table a new Israel-Palestinian peace initiative, other than to say that his approach to a plan, should one become public, will rest on clear criteria.

“My approach to the this plan will depend on how it fits together with Israel’s security and national interests. We have made this clear to our American friends,” Netanyahu said.

Despite Netanyahu’s reticence to comment, right-and left-wing flanks of Israel’s political echelon lined up Sunday to comment on reports over the weekend that the administration of United States President Donald Trump is planning to table a proposal to recognize a Palestinian state, without requiring the demolition of Israeli communities in Judea and Samaria.

Agriculture Minister Uri Ariel, co-chairman of the National Union faction of the Jewish Home party, reportedly said he and co-chairman MK Bezalel Smotrich would bolt the government if Prime Minister Netanyahu were to endorse the plan. The Yesha Council, an umbrella organization representing Jewish communities in Judea, Samaria and the Jordan Valley, called the proposal “dangerous” and said it would have no benefit for the current government.

“We’ve fought in the past and will continue to fight any idea that includes the establishment of an Arab state west of the Jordan River,” the statement said.

Arab MKs also slammed the report. Aida Touma–Sliman (Joint List)  rejected the possibility that the United States could broker a deal between Israel and the Palestinians because Washington has always supported Israel’s position.

“Trump is promoting a dangerous move that exploits the regional situation in order to impose an agreement that does not meet the national needs of the Palestinian people and severely harms its right to freedom, independence,” Touma Sliman said.

“Any peace agreement between Israel and Palestine must be based on a complete withdrawal to the 1967 borders, the evacuation of the settlements, East Jerusalem [as the] capital of the future Palestinian state, and a fair solution to the refugee issue,” she added.

On the other hand, MK Dr. Nachman Shai (Zionist Union), chairman of the the Knesset Lobby for US-Israel Relations, called on Prime Minister Netanyahu to accept the plan, or at least to agree to using it as an opening point for talks with the Palestinians, because Israel must not be seen to be the side refusing to make peace.

“Although the American proposal has not yet been placed on the table, it seems to have logic and is based on the agreements reached in the past. In any case, Israel should not reject new proposals. The beginning of dialogue is an important goal in itself,” Shai said.

Notably, little is known about the reported plan. Saturday night, Hebrew-language Channel 12  News reported that Trump will propose that the Palestinian Authority declare full independence alongside Israel, complete with US recognition and a plan for economic support by the Sunni Arab countries, headed by Saudi Arabia.

Channel 12 said the plan accepts Israel’s demand to maintain a  military presence in the Jordan Valley, as well as plans for talks over Jerusalem and the US Embassy.