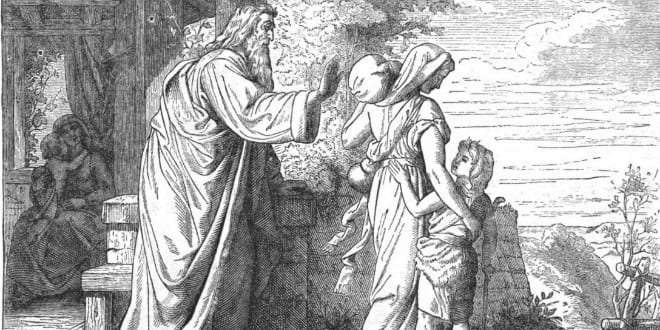 A recently published study presented a  4,000-year-old cuneiform tablet that was an Assyrian marriage contract closely resembling the arrangement between Abraham and Hagar but with significant differences. Some media, apparently more well-versed in pagan practices than the Bible, have made some seriously flawed conclusions about the discovery, while researchers missed some glaring revelations the Bible could have offered in their archaeological study.

The baked clay tablet is a Mesopotamian marriage contract between a man and woman named Laqipum and Hatala. As part of the prenuptial agreement, the husband was allowed the option of employing the help of a surrogate mother if the couple failed to conceive a baby two years after the date of marriage.

“The female slave would be freed after giving birth to the first male baby and ensuring that the family is not be left without a child,” Professor Ahmet Berkız Turp from Harran University’s Gynecology and Obstetrics Department said to the Daily Sabah. “As divorce was not an option for infertile couples in Assyrian culture, and monogamy was valued, this clause gave a way to continue in the marriage and grow families who struggled to conceive.

If grounds for divorce were met, the tablet laid out the terms of payment for both spouses. According to the study recently published by researchers in the medical journal of Gynecological Endocrinology, the inscription reads: “Should Laqipum choose to divorce her, he must pay [her] five minas of silver—and should Hatala choose to divorce him, she must pay (him) five minas of silver. Witnesses: Masa, Ashurishtikal, Talia, Shupianika.”

The study stated that five minas of silver are worth about $1,500 today.

This closely mirrors the arrangement arrived at between Avram and Sarai in the Bible when it seemed they would be unable to conceive.

So Sarai, Avram’s wife, took her maid, Hagar the Egyptian—after Avram had dwelt in the land of Canaan ten years—and gave her to her husband Avram as concubine.Genesis 16:3

It is significant that after Hagar gave birth to Ishmael, the forefather of the Arabs, Hashem assures Avram (now called Avraham) that his covenant is exclusive with Sarai’s (now called Sarah) yet-to-be-conceived son, Yitzchak.

Hashem said, “Nevertheless, Sara your wife shall bear you a son, and you shall name him Yitzchak; and I will maintain My covenant with him as an everlasting covenant for his offspring to come. Genesis 17:19

She said to Avraham, “Cast [garesh] out that slave-woman and her son, for the son of that slave shall not share in the inheritance with my son Yitzchak.” Genesis 21:10

In some media, the woman in the Assyrian marriage arrangement was mistakenly referred to as a hierodule, a male or female prostitute whose actions are a form of worship for pagan Gods. Though this practice was not uncommon in the ancient world, unlike the arrangement described in the cuneiform text which was focused on procreation within the parameters of marriage and not as a religious rite, hierodules were entirely for sexual relations as a pagan ritual and not for having children.

Had the researchers read the story of Abraham and Sarah (and Hagar), they might have wondered what would happen to Laqipum and Hatala in similar circumstances. What if they carried out their agreement and utilized a surrogate mother after two years of infertility only to be surprised by a child in the third year?

The tablet was discovered at the Kültepe-Kanesh UNESCO World Heritage site in Turkey’s central Kayseri province. The area was a settlement during the Old Assyrian Empire dating between 2100 BCE and 1800 BCE. Digging began at the archaeological site in 1925 when over 1,000 cuneiform tablets were discovered. This particular tablet is on display at the  Istanbul Archaeology Museum and was written about in the medical journal Gynecological Endocrinology as the earliest known mention of human infertility.