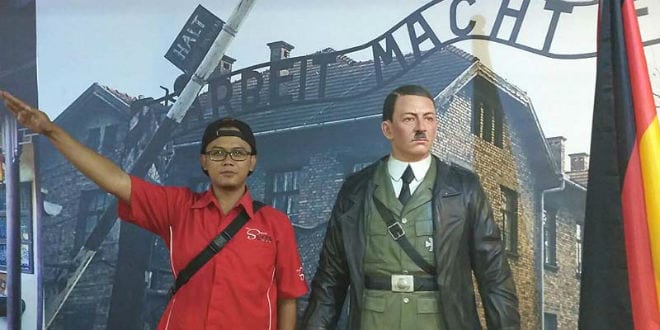 Indonesia’s version of the Madame Tussauds wax museum, the De ARCA Statue Art Museum in the Javanese city of Jogjakarta, on Saturday removed a wax sculpture of Adolf Hitler in response to harsh criticism from the Simon Wiesenthal Center. The museum’s operations manager, Jamie Misbah, told AFP, “We don’t want to attract outrage.”

According to Merkur.de, the Hitler figure was particularly popular, as many visitors posed for selfies next to the ultimate Nazi, who stood wide legged in front of a picture the entrance to Auschwitz with its sinister slogan, “Arbeit macht frei” – “Work will set you free” in German.

The social networks offer numerous posts from visitors standing beside the statue of one of history’s evillest men, giving the Hitler salute, and that includes children. It was these photos which eventually caught the eyes of the folks at the Wiesenthal Center.

“Everything about it is wrong. It’s hard to find words for how contemptible it is,” said Associate Dean Rabbi Abraham Cooper. “The background is disgusting. It mocks the victims who went in and never came out.”

Human Rights Watch also denounced the exhibit, which it said was “sickening.”

Andreas Harsono, an Indonesian researcher at Human Rights Watch, reported on Saturday, “I can confirm that the statue has been removed. We welcomed the decision because regardless of the intention, depicting Hitler as if he were a respected figure is in bad taste.”

Back in 2013, the Soldatenkaffe, a café featuring Nazi decorations and memorabilia, closed down following harsh criticism by the world press. The SoldatenKaffe was reopened in 2014, and the owner insisted the Nazi theme was there for strictly educational purposes.

Nazi chic – the use of Nazi-era style, imagery, and paraphernalia in popular culture, is huge in Asia, where World War II is taught in schools as a conventional war. In that context, Asian education often treats Hitler as a charismatic and powerful leader, rather than a war criminal.