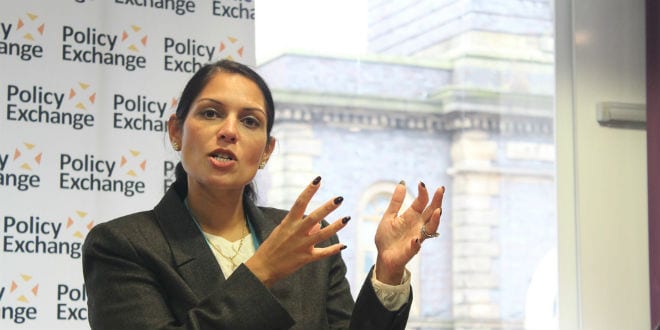 British Secretary of State for International Development Priti Patel was forced to resign on Wednesday after she came under fire for unauthorized meetings with Israeli officials while she was on a family holiday to Israel in August. Although Patel says that she paid for the trip with her own money, the British government sees the unapproved meetings as a breach of diplomatic protocol.

On her family vacation, Patel met with Israeli Prime Minister Netanyahu, former Finance Minister Yair Lapid, and other senior Israeli officials. Her meetings included talks regarding the possibility of using British aid to channel medical assistance operations for Syrian refugees through the Israeli army in the Golan Heights. The British government does not recognize Israel’s sovereignty over the Golan Heights, which was captured in the Six-Day War of 1967.

According to Britain’s parliamentary code, government ministers must request approval from the Foreign and Commonwealth Office for all meetings with foreign leaders. In addition, it is a breach of code to travel to the Golan, the West Bank, and East Jerusalem as a guest of the Israeli government.

According to Member of Parliament Crispin Blunt, the meetings “would have been all right” if the Foreign and Commonwealth Office had been notified beforehand, but British media and opposition MPs demanded Patel’s resignation or firing. Patel submitted her resignation to British Prime Minister Theresa May in a letter.

Patel is known for being a more conservative, pro-Israel minister of Parliament. In 2016, she ordered the freeze of $31 million in Palestinian aid pending an investigation into how U.K. aid is being used after it was revealed that the financial assistance had been going to families of suicide bombers and teenage attackers.

At a meeting with May on Monday, Patel apologized for the possibility that the meetings could be misinterpreted.

A day later, on Tuesday, Patel was asked to fly home from a trip to Uganda as an announcement of an additional meeting with Israeli Internal Security Minister Gilad Erdan was leaked. Further leaks by Haaretz were published, exposing Patel’s visit to an Israeli military field hospital that treats Syrian refugees and victims of the civil war.

In her statement of apology, Patel detailed 12 meetings with Israeli officials and stated, “In hindsight, I can see how my enthusiasm to engage in this way could be misread, and how meetings were set up and reported in a way which did not accord with the usual procedures. I am sorry for this and I apologize for it.”

On Wednesday, Patel gave her official resignation. “I offer a fulsome apology to you and to the Government for what has happened and offer my resignation,” she wrote in the letter to May.