MK Glick: We Dreamed of Jerusalem All the Way to Damascus!

Home » MK Glick: We Dreamed of Jerusalem All the Way to Damascus! 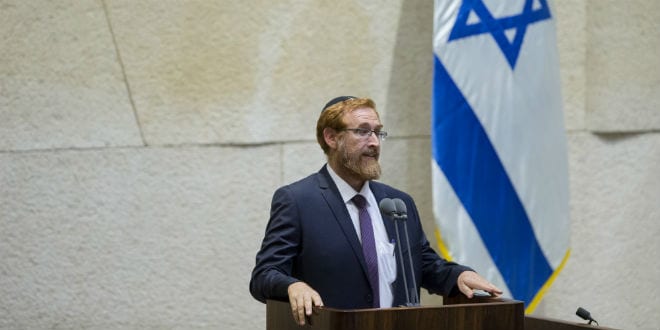 A preliminary investigation into the Greater Jerusalem Bill led to an impassioned speech by Likud MK Rabbi Yehudah Glick, slamming the wording of the law for endangering the city it was intended to protect. In his speech, Rabbi Glick described his vision of a “greater Jerusalem spreading all the way to Damascus”.

The bill is intended to allow expansion of the Jerusalem municipal boundaries to include four major settlements and a settlement bloc in the West Bank home to more than 100,000 Israelis. The dispute arose over a section added to the bill which removed an equal number of  Palestinians living in neighborhoods outside the security barrier from the city’s census, effectively creating a new municipality from sections of Jerusalem.

The bill states, “We are enacting this law so that in the future we will have the option of relinquishing sections of Jerusalem.”

It was precisely this section of the proposed law that was the focus of Rabbi Glick’s fury.

“What can be said?” Rabbi Glick asked rhetorically. “Jerusalem is supposed to be the city that floats above us all. This law shouldn’t even be necessary. Every Jewish couple married in the last 3,000 years has sworn not to forget Jerusalem. Who could imagine splitting up Jerusalem?”

The underlying motive behind the offensive addendum was a concern for demographics. This section was supported by left-wing factions in the Knesset who feared that incorporating the Arab neighborhoods would threaten future negotiations with the Palestinians. Rabbi Glick dismissed this reason for the addendum.

“I am hearing some people who say that anyone who supports this bill is against peace,” Rabbi Glick said. “Who are they to decide what will bring peace and what will push peace away?”

“I don’t understand how the Bayit HaYehudi (Jewish Home) Party can put in sections to this law that allow the option of removing parts of Jerusalem,” Rabbi Glick said. “We want to expand Jerusalem. You say that we didn’t think about [the Arab neighborhoods] of Jerusalem. You can just as well say that we also didn’t think about [the growing Jewish sections].

“When I married, I made an oath never to forget Jerusalem,” Rabbi Glick said. “I cannot ever vote for a bill that allows giving up any section of Jerusalem.”

Watch his speech (Hebrew only):