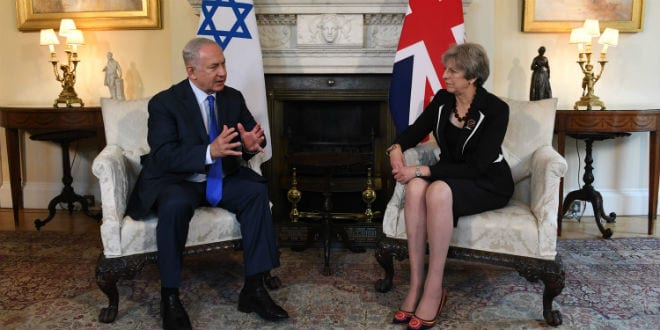 Marking the 100th anniversary of the Balfour Declaration, British Prime Minister Theresa May praised her country’s role in helping pave the way for the creation of the state of Israel.

At a dinner attended by Prime Minister Benjamin Netanyahu as well as a host of other British and Israeli dignitaries, May said the U.K. is proud “of the relationship we have built with Israel,” and called for “renewed resolve to support a lasting peace that is in the interests of both Israelis and Palestinians.”

“A hundred years ago, the Balfour Declaration helped pave the way for the re-establishment of an independent state for the Jewish people in our ancestral homeland,” he added. “A hundred years later, our two countries, our two democracies—Israel and Britain—are strong allies and partners.”

Issued in November 1917, the Balfour Declaration offered Britain’s support for “the establishment in Palestine of a national home for the Jewish people.”

The U.K.’s political opposition leader, Jeremy Corbyn—whose Labour party has been dogged by allegations of anti-Semitism in recent years—did not attend the Balfour centennial dinner. Corbyn, who in the past has described the Hamas and Hezbollah terror groups as “our friends,” citied pre-existing engagements for his non-attendance, which some viewed as a snub of Netanyahu.

“Balfour promised to help establish a national home for the Jewish people in Palestine while pledging that nothing would be done to prejudice the rights of its ‘existing non-Jewish communities,’” Corbyn said in a statement.

“A hundred years on,” he said, “the second part of Britain’s pledge has still not been fulfilled and Britain’s historic role means we have a special responsibility to the Palestinian people, who are still denied their basic rights.”

Netanyahu, meanwhile, on Friday opened trading at the London Stock Exchange and said he “spoke with dozens of business people who love Israel and invest in Israel.”

“I told them: invest more and bring your friends too,” said Netanyahu. “There is great admiration for Israel [in the U.K.], and considerable success.”