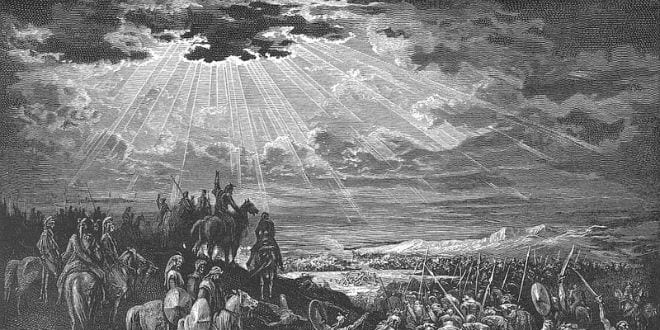 The Biblical patriarch Joshua ‘stopped the sun’ on October 30, 1207 BCE by way of a solar eclipse that may have been the first recorded in history, Cambridge researchers announced Monday.

In a paper published in the scientific journal Astronomy and Geophysics earlier this month, researchers from England’s Cambridge University confirmed a theory first suggested by Ben Gurion University researchers last January: that Joshua’s miraculous ‘stopping of the sun’ during battle to allow the Israelites more time to defeat their enemies was actually an annular solar eclipse.

They even pinpointed the exact date – the afternoon of October 30, precisely 3,224 years ago.

In the Biblical account, Joshua led the Israelites into battle with the armies of five kings in order to help the besieged Gibeonites, with whom they had signed a pact. As the Israelites began to gain the upper hand, Joshua prayed for the sun and the moon to stand still in order to complete the defeat. His prayers were answered.

And the sun stood still, and the moon stayed, until the nation had avenged themselves of their enemies. Is not this written in the book of Jashar? And the sun stayed in the midst of heaven, and hasted not to go down about a whole day. Joshua 10:13

The Cambridge researchers understood this passage as an important historical account.

“If these words are describing a real observation, then a major astronomical event was being reported,” said paper co-author Professor Sir Colin Humphreys from the University of Cambridge’s Department of Materials Science and Metallurgy. “The question for us to figure out is what the text actually means.”

The British researchers used the original Hebrew Bible to better understand the exact connotations of the verse.

“Modern English translations, which follow the King James translation of 1611, usually interpret this text to mean that the sun and moon stopped moving,” explained Humphreys. “But going back to the original Hebrew text, we determined that an alternative meaning could be that the sun and moon just stopped doing what they normally do: they stopped shining.

“In this context, the Hebrew words could be referring to a solar eclipse, when the moon passes between the earth and the sun, and the sun appears to stop shining.”

He added that the interpretation was supported by the fact that the Hebrew word meaning ‘stand still’ shares a root with a Babylonian word describing eclipses found in ancient astronomical texts.

While historians have long suspected that Joshua’s feat was an astronomical phenomenon, none were able to date the possible eclipse because they were only looking for total eclipses. However, Joshua’s eclipse was annular, meaning that rather than obscure the sun entirely, the moon’s passage in front of the sun was too far away to cover it completely and left a characteristic ‘ring of fire.’

With the help of the Merneptah Stele, an Egyptian artifact which independently confirms the Israelites’ presence in Canaan, historians have dated Joshua’s entry into the land to between 1500 and 1050 BCE. Using complex calculations, the researchers determined that the only annular eclipse visible from the Canaan during that period took place in October of 1207 BCE. The path of this eclipse passed directly over Canaan.

The researchers were thus able to date the exact hour of Joshua’s miraculous feat: between 3:27 PM and 4:53 PM in local time (determined by sundial).

Though there may be a scientific explanation for the Biblical miracle, this in no way refutes its divinity, Rabbi Arieh Trugman told Breaking Israel News when the Israeli research was announced early in the year.

“Despite the fact that in many different areas people want to pit science against Torah, what is much closer to the truth is that in most cases there is no conflict between science and Torah,” said Rabbi Trugman. “It is very common to find many areas in which there exists an amazing confluence of  secular knowledge and Torah wisdom.”

The Cambridge researchers also noted that should the date be accepted by general historians, it could help clarify the dates of pharaonic reigns, including that of Ramses the Great.

According to the calculations and verified with Egyptian records, the reign of the pharaoh Merneptah began in 1210 or 1209 BC, dating the reign of his father, the famous Egyptian pharaoh Ramesses the Great, to 1276–1210 BC, plus or minus one year, the researchers determined.