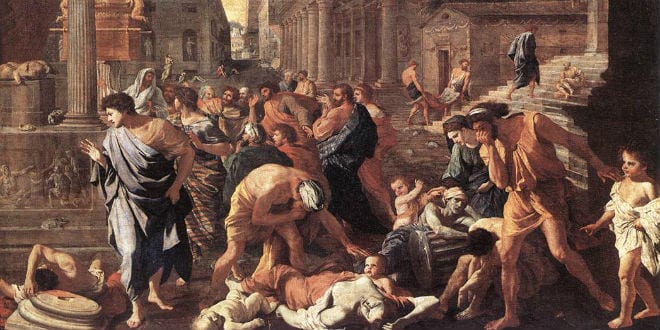 Bubonic plague, a terrifying disease that once killed off half the world’s population, is breaking out in Madagascar, defying the best efforts of world health organizations attempting to prevent its spread through East Africa. The key to understanding this dread disease lays in the Bible, which describes its Egyptian origins – and its terrifying role in the end-of-days.

The number of deaths in Madagascar has almost doubled in the past week, with 124 dead and over 1,200 infections diagnosed. The majority of cases, 67 percent, were the pneumonic form of the disease, which is airborne and highly contagious, spread via coughing or sneezing. Though international health officials insist the risk of the disease spreading to other regions is low, they have set up operations to prepare for such an occurrence in the nine East African nations adjacent to Madagascar.

The strong reaction to the recent outbreak is understandable. Bubonic plague in the 14th century, also known as the Black Death, was one of the most devastating pandemics in human history, resulting in the deaths of an estimated 75 to 200 million people in Eurasia and in Europe. If untreated, the disease has a 100 percent mortality rate, and the pneumonic form can be fatal within 12-24 hours.

But the disease may have even deeper roots in human history. The sixth plague in Egypt, boils, may very well have been bubonic plague, whose characteristic symptom is boil-like skin lesions that form black ulcers.

An outbreak of the bubonic plague in Egypt would be consistent with what scientists know about the disease. In 2010, scientists traced the plague to ancient Egypt. Ancient cultures lived close to their livestock, and the plague was transferred from the animals by fleas. While exploring ruins in Egypt, Egyptologists found 3,000-year-old remains of Nile rats and used fine sieves to discover the remains of fleas, both carriers of plague.

The Black Death may have made another Biblical appearance. The fifth and sixth chapters of the Book of Samuel describe how the Philistines captured the Ark of the Covenant, placing it in their pagan temple in Ashdod. The idol in the temple was overturned and the city was struck by a disease, leading the people to return the Ark. Along with the Ark, the Philistines gave the Jews “aphlei zahav”. This is normally translated as golden hemorrhoids, though some Biblical scholars translate this item as golden boils.

You shall make figures of your hemorrhoids/boils and of the mice that are ravaging your land; thus you shall honor the God of Yisrael, and perhaps He will lighten the weight of His hand upon you and your gods and your land. I Samuel 6:5

Significantly, five golden rats, hosts to the flies that carry bubonic plague, were included in the Philistines’ gift. When describing this gift, the narrative in Samuel makes reference to the plagues in Egypt.

Don’t harden your hearts as the Egyptians and Pharaoh hardened their hearts. I Samuel 6:6

Though the numbers of deaths and infections resulting from the current outbreak may seem relatively small, any outbreak of bubonic plague is cause for concern. Rabbi Rami Levy, an end-of-days lecturer from Jerusalem, does not believe this outbreak is a significant threat, but he warned that it may become one in the apocalyptic future.

“There will certainly be another plague that destroys a significant part of the world population,” Rabbi Levy told Breaking Israel News. “But not until after the War of Gog and Magog,and specifically against the people who came out against the Jews.”

“All of the catastrophes that are happening now, the storms and earthquakes, are exceptional but they are not nearly on the scale of what we will see before Moshiach (Messiah),” Rabbi Levy said. “Right now we are just seeing wake-up calls, reminders that Moshiach is on the way.

“The plague that comes after Gog and Magog will be even worse than what the world saw in the Middle Ages,” the rabbi stated.

A number of major international health organizations are currently involved in aiding Madagascar and preventing the spread of the plague. The World Health Organization, Unicef, the Red Cross, the Centers for Disease Control and Prevention, and the European Centre for Disease Prevention and Control have all mobilised emergency plans in the country, while also setting up programs in South Africa, Mauritius, Tanzania, La Réunion, Mozambique, Kenya, Ethiopia and Comoros, to prevent a pandemic. They are also operating in Seychelles, where several cases of the disease have been diagnosed.