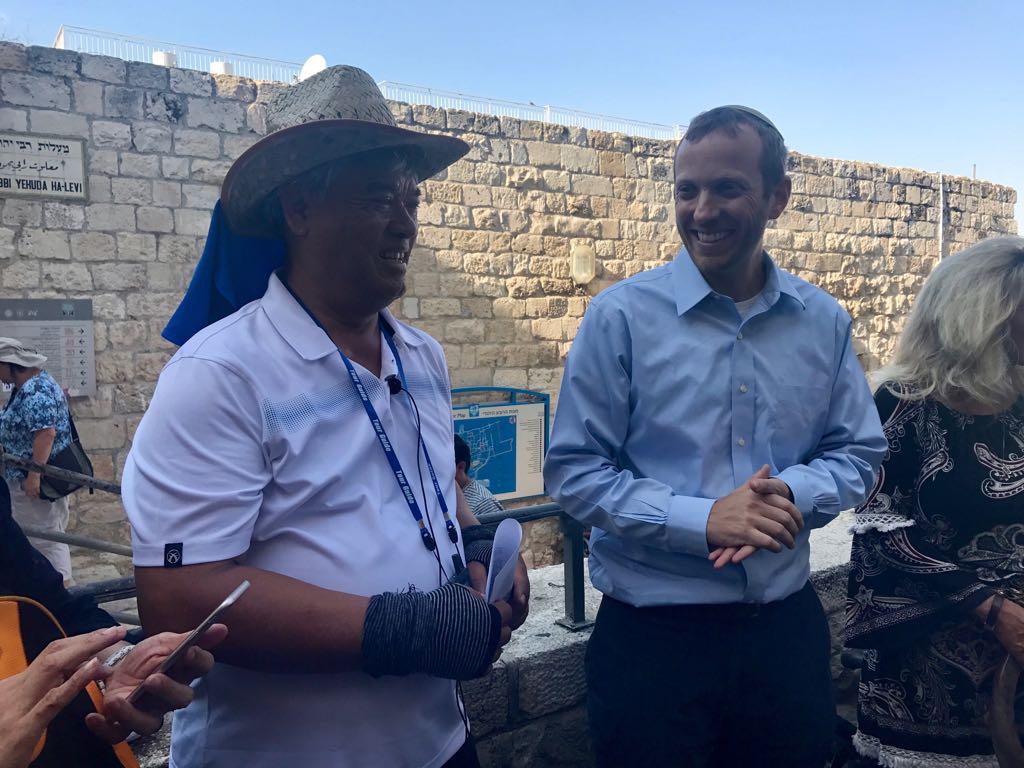 Pastor Alex Cho, chairman of the Taiwan Holocaust Peace Museum, has taken on the unique mission of showing fellow Taiwanese Christians how Biblical prophecy has been fulfilled throughout Jewish history and how it continues to be fulfilled in the modern State of Israel.

Pastor Cho, an enthusiastic Israel supporter, recently visited Israel for the 12th time. He has brought over 600 members of his congregation with him to fulfill this mission of educating the Taiwanese Christian communities about Israel, the Jewish people, and the Torah.

“In the beginning, I didn’t think it was my duty or responsibility to do this work,” Pastor Cho told Breaking Israel News. “But after I went to the Jerusalem and the Temple Mount and met the Jewish people, I felt this mission.”

In addition to leading trips to Israel, Pastor Cho studies Jewish history because he believes the history of the Jewish people is not just history, but prophetic forecasts coming to life. After visiting Israel’s Yad Vashem Holocaust Museum, Pastor Cho saw how “what they say in Isaiah and Zechariah is the truth.” For example, he points out, Zechariah prophesied that two-thirds of the Jewish population will be annihilated, but God will keep the last remaining third alive.

Throughout the land —declares Hashem— Two-thirds shall perish, shall die, And one-third of it shall survive. That third I will put into the fire, And I will smelt them as one smelts silver And test them as one tests gold. They will invoke Me by name, And I will respond to them. I will declare, “You are My people,” And they will declare, “Hashem is our God!” Zechariah 13:8-9

According to Pastor Cho, the Holocaust showed that God’s will is in Jews in Israel, which represents the remaining third of the Jewish population. As chairman of the Taiwan Holocaust Peace Museum, Pastor Cho works every day to show people this fact. “I know this is my calling to show that [Jewish history] is not just history, it is God calling for his people to come back to Israel,” Cho told Breaking Israel News.

Pastor Cho also sees fulfilled prophecy in the modern State of Israel. “The founding of the State of Israel in 1948 was Hashem’s will becoming true. The ingathering of the exiles and aliyah (immigration) to Israel is God’s will, and it will continue to become true in the final redemption,” he said.

In the face of lingering Christian belief in replacement theology, Pastor Cho stresses the importance of bringing Taiwanese Christians to visit Israel and learn about the connections between prophecy in the Hebrew Bible and Jewish history. Replacement theology holds that the blessing from God was transferred from the Jewish people to the Church, which Pastor Cho says explains why “some people do not like Jews in Taiwan.”

The other reason for anti-Semitism in the country, Pastor Cho maintains, is that “while most Taiwanese churches are supportive of Israel, they don’t have much information about the real Israel. Most of what they get from the news and European media is negative.”

But once replacement theology believers visit Israel and learn about Jewish history, “they will see that what they thought is not right,” Pastor Cho told Breaking Israel News. For example, “When the groups see people with a kippah and tallit (Jewish head covering and shawl), we explain that the traditions have been in existence for thousands of years. This is the living Torah, the commitment to God that they still keep. After this experience, Taiwanese Christians will better understand that God is in the Jewish people.”

Moreover, quoting Genesis 12:3, Pastor Cho said, “The Bible says that those who bless Israel and pray for the peace of Jerusalem will be blessed, and they will better understand their own daily worship.”

His passion for showing Taiwanese Christians the “real Israel” began with his father, who built a Zionist community in Taiwan after being inspired to teach Christians to pray for Jerusalem in a Kiyoto, Japan seminary. As a 5th generation Christian and the 10th pastor in his family (which now has 12 pastors), Cho followed in his father’s footsteps after being equally inspired by Israel.

While Pastor Cho’s trips strengthen his confidence in the coming of the redemption, they also strengthen his optimism in the relationship between Taiwan and Israel and Christians and Jews.

Taiwan, like Israel, “is a small democratic republic in a big neighborhood,” and thus, Pastor Cho maintains that Taiwan can “fully understand Israel’s political situation and can even act as a cultural bridge between Israel and China.”

Such understanding between the two countries has proven positive for the Taiwan-Israel relationship. In February 2017, Lee Meng-yen, the mayor of Tainan, Taiwan, a sister city of Ra’anana, came to visit Israel. According to Pastor Cho, “Despite the political reasons that make him unable to come out as completely supportive of Israel, he comes to my Holocaust exhibitions and is quietly supportive of Israel.”

Pastor Cho sees the Jewish-Christian relationship as mirroring the Israel-Taiwanese relationship. He spoke of a prophesied unity forged between Jews and gentiles as the sun, representing God’s power, rises in the East. “East can mean Israel, and it can also mean Taiwan. In the same way, Christians and Jews worship the same God, and we will become one,” Pastor Cho told Breaking Israel News.  Seeing this prophecy coming to reality on his trips, he concluded, “When my groups come to the Western Wall (Kotel) to pray, they want to stay for hours. They are so moved as they see that Hashem is in [the Kotel],” said Pastor Cho.

Moments like these, Pastor Cho says, seeing his fellow Christians finding meaning in Israel, makes his work worth it. “I see change every day as we take the groups to Israel. More and more, Christians are coming to Israel and loving Israel. Each individual represents a small change, but a large effect.”