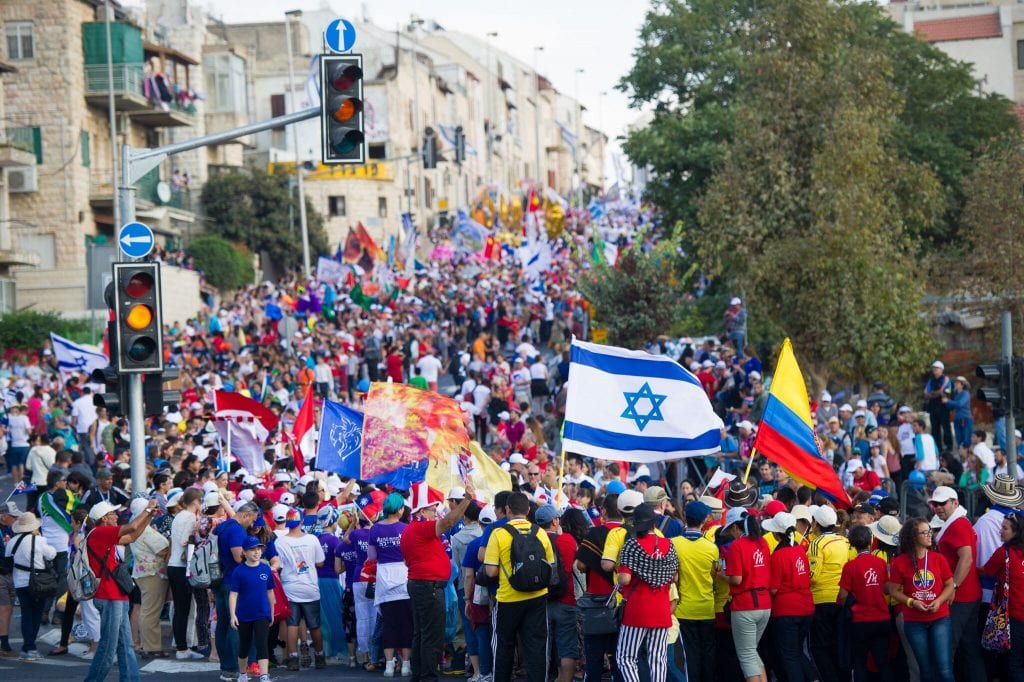 Christian tourists are flooding Jerusalem during the holiday of Sukkot, bringing a blessing to the economy in a manner reminiscent of Jerusalem in the days of the Temple, when pilgrims filled the city’s markets. This faith-based tourism has its own special flavor, connecting Jews and Christians in unexpected ways.

In what is shaping up to be a record year for tourism, the Sukkot holiday was an especially blessed period. According to the Israeli Ministry of Tourism, 739,000 tourists visited Israel in the first quarter of the year, a 24 percent increase from the same period last year, giving an estimated $1.14 billion boost to the economy.

In addition to the holy sites and other tourist attractions that have always attracted people of all religions to Israel, the Sukkot holiday offers a special atmosphere created by the festive booths and many activities and events, both religious and secular. The Ministry of Tourism estimated that the week-long holiday attracted an astounding 47,000 Christians.

Undoubtedly the largest draw for Christians during Sukkot is the week-long Feast of Tabernacles hosted by the International Christian Embassy Jerusalem (ICEJ). The event brings over 5,000 Christians from 85 nations to Jerusalem, and though their intention is to bless the nation of Abraham and to be blessed in return, hosting these well-minded pilgrims brings an economic blessing as well.

Most of the activities are centered around the Jerusalem Pais Arena, where spiritual leaders and teachers address the crowds. Like secular conferences, the Feast attracts vendors that offer a special brand of merchandise for their special customers.

D’ganit owns the Ora gift shop in Jerusalem with her husband. For the last 25 years she has had a booth at the Feast.

“These are wonderful people, honest and straightforward,” D’ganit told Breaking Israel News. “They come here because they love Israel and they want to help support the country. They aren’t rich, but their love for Israel comes through loud and clear. We try to give them the best prices so that they go away with an even greater love for Israel. For our store, this has worked, because we see the same people year after year.”

D’ganit has a large and eye-catching array of items in her booth, but the Christian tourists who come to Jerusalem for Sukkot have a specific type of souvenir in mind.

“They love everything connected to Judaism,” she explained. Her booth is easy to find because of the shofar blasts. Baskets containing a dazzling array of horns fill the front of her shop.

Arik Agassi, whose family’s booth reflects this, offers a similar array of merchandise. Via their online family business called Holyland Webstore, the Agassi family, led by father Amnon, enjoys connecting face-to-face with their international Christian clientele at the Feast, where they have had a booth for the past three years.

Many items needed for Jewish life are on display: Passover seder plates, shofars, and Sabbath candlesticks.

Arik was quick to model the beautiful prayer shawls, and even had a beautiful sample draped over his shoulders as he hawked his wares. One surprising item for sale, unique to the Christian clientele, are seven-branched menorahs. Menorahs with nine branches are used in the holiday of Hanukkah, but the seven branched version is modeled after the menorah that stood in Solomon’s Temple.

“For them it really represents something that was very holy,” Amnon said. “This just shows how they feel their connection to the Jewish people very deeply, going back to the roots of their religion.”