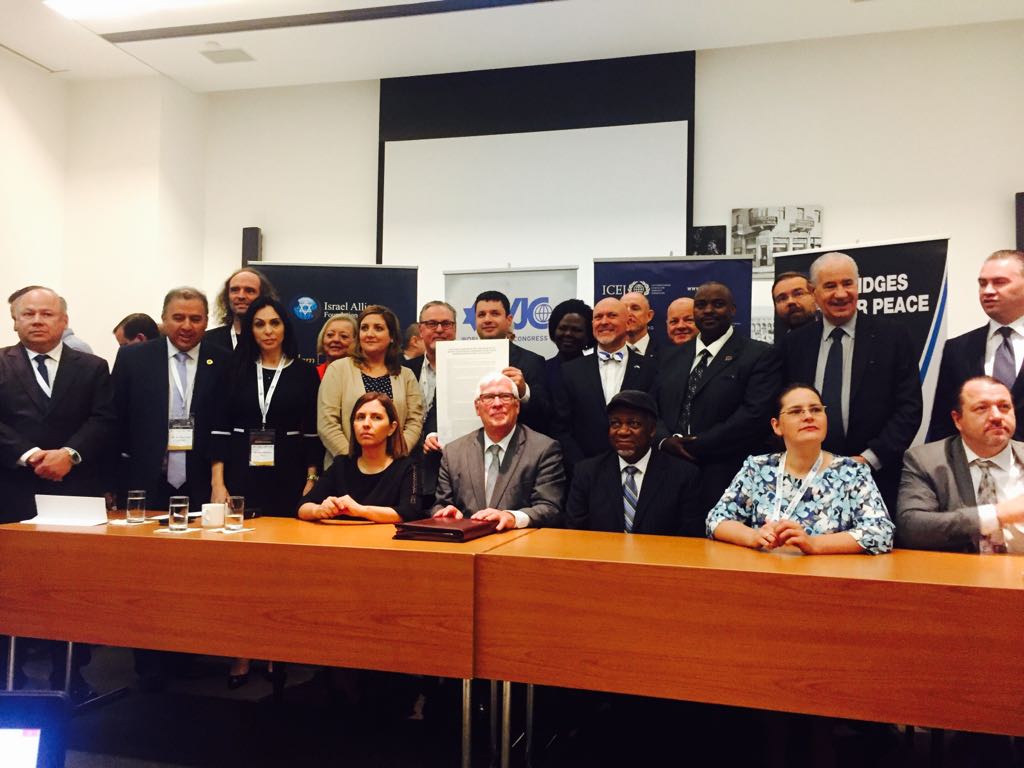 Faith-based diplomacy is leading the efforts against delegitimization of Israel, said Josh Reinstein, president of the Israel Allies Foundation (IAF) on Monday.

This week, IAF, together with the World Jewish Congress, the International Christian Embassy in Jerusalem (ICEJ) and Bridges for Peace, brought 27 members of parliament (MPs) from 15 countries to Israel for the Jerusalem Chairman’s Conference to arm participants with the inspiration and clarity they need to defend the State of Israel in their home countries.

“We witness once again the rise of anti-Semitism around the world, which is often couched in political stances against Israel’s right to exist,” said Reinstein.

On Monday, the delegation signed a resolution forcefully rejecting all declarations seeking to deny Israel’s and Jerusalem’s Jewish origins, as well as any misrepresentation of the Jewish State of Israel as an occupier.

The resolution calls upon governments to adopt the US State Department’s and the International Holocaust Remembrance Alliance’s definition of anti-Semitism, and thereby recognize that anti-Israel and anti-Zionist expression can be used to convey anti-Jewish bigotry. It likewise includes a statement of support for the Jewish people’s “God-given and legal rights to sovereignty and self-defense upon the entirety of its lands and territories, recognizing the need of people of all faiths for a strong and united Israel, with Jerusalem as its eternal and indivisible capital.”

Minister of Social Equality Gila Gamliel (Likud) accepted the resolution on behalf of the Israeli government. She said the resolution comes at an especially important time, when so many organizations and people are trying to re-write history.

“I say enough of being politically correct; let’s be Biblically correct,” Gamliel told the MPs. “You are on the right side of history.”

The IAF, founded by the late Israeli Minister and Rabbi Binyamin Elon – the father of faith-based diplomacy, according to Reinstein – works with parliaments around the world to mobilize political support for Israel based on Judeo-Christian values. According to Reinstein, IAF has more than 1,000 parliamentarians from around the world in its network.

“Benny had a vision of the restoration of Israel and for the whole world to take part in that,” said IAF executive director Daniel Williams, who noted that many MPs put their political careers at risk to visit and outwardly support the State of Israel.

The MPs toured the country, including visits to the Tomb of Rachel in Bethlehem and several holy and strategic sites throughout Samaria. Events culminate Tuesday evening with Israeli Night at the ICEJ’s Feast of Tabernacles.

The purpose of these visits was two-fold. First, IAF wanted the visitors to walk through the streets of God’s Promised Land and witness verses from the Bible coming alive before their eyes, said Reinstein. And second, the organization sought to help them understand the strategic necessity of these areas, said Samaria leader Yossi Dagan.

In a briefing on Mount Gerizim in Samaria, Dagan explained that if Israel were to give up Samaria as part of a peace process, there would be only 15 kilometers between Israel’s major cities and the closest Arab neighborhoods. The Israeli border would be indefensible. Dagan said, however, that he does not believe these kinds of sacrifices will need to be made, because God promised this land to the Jewish people.

“After boycott, delegitimization and terror attacks, our population grows 10 percent a year,” said Dagan. “We are winning because we believe and because we build in our heartland.”

Both Dagan in Samaria and MK Yehudah Glick in Bethlehem called on MPs to help explain the truth about Israel to the world.

“We are all here trying to be tools in the hand of God,” said Glick. “I am appointing you as ambassadors of Israel and God. Don’t go home and think you are finished. Take on the obligation and do it and use it, and tell people…what you saw with your own eyes, how the words of the prophets are becoming reality.”

Glick said MPs have a Biblical choice to make.

“You can choose if you want to be Pharaoh or Cyrus or Nebuchadnezzar,” he said. “If you choose to be part of the miracles, you become connected to eternity.”

Ministers: Move the US Embassy

At the backdrop of the conference were several murmurings about the recent statement by President Donald Trump that he will likely wait to move the United States Embassy to Jerusalem until Israel and the Palestinians are further along in the peace process.

Appearing over the weekend on a show hosted by former Arkansan Governor Mike Huckabee on the Trinity Broadcasting Network, Trump said he wanted to wait for the results of a budding peace proposal being formulated by the US “before I even think about moving the embassy to Jerusalem.”

Deputy Minister of Foreign Affairs Tzipi Hotovely (Likud) told MPs she disagrees with Trump, in some of the first public statements by an Israeli official against the US president since he took office earlier this year. Hotovely said if Trump really wants to give peace a chance, he should immediately move the Embassy to Jerusalem. Doing so would “make sure Jerusalem will never be divided and to make sure Jews and Arabs can live peacefully together.”

“In the Middle East, where we live, the fact that terrorism is here is not because we gave up the idea of a peace process, but because they [the Arabs] would like to remove Israel from the map of the Middle East…We need to see all embassies in Jerusalem and make sure Jews can build their houses here,” Hotovely said.

Similarly, Glick said “real peace” will only be when the world recognizes Jerusalem as the eternal capital of the Jewish people.

“Trump said he would recognize this and we expect him to do it,” Glick told Breaking Israel News. “I don’t think that transferring the embassy should happen after we achieve peace, but as part of achieving peace. Any delay will not get us closer.”

Visitors also focused on the impact of the Boycott, Divestment and Sanctions (BDS) movement on Israel. There were nine Republican and Democratic representatives on the mission from South Carolina, the state that penned and passed the first anti-BDS legislation banning the state from entering into contracts with companies that participate in certain kinds of boycotts. That legislation has served as a model for more than 50 similar laws, which have been passed in the US and around the world.

MP Kenneth Meshoe from South Africa said the statement made by the success of the South Carolina BDS law is that “this battle we are busy with is winnable and because it is winnable none of us should lose courage. The day will come when many nations of the world will stand with Israel. Ultimately truth will prevail over lies and light will prevail over darkness.”

Christian love and hope for the State of Israel came out in many different forms throughout events. The MPs were not shy about their beliefs in Biblical prophecy as it pertains to Israel and the blessings they hope to receive for their own countries as a result.

“I recall once being asked why I, as a state representative of South Carolina, have such a passion for Israel,” said Republican Representative Alan Clemmons. “I responded that it is because I am a Christian and because I believe in doing what is right and pushing back on the lies being told about our great ally Israel.”

Meshoe said that he is a proud Evangelical Christian and he believes that people like him must be at the forefront of voices in defense of Israel “because those who hate Jews also hate Christians.”

He said, “The Bible we read comes from the Jews; everything about Christianity is from the Jewish people. Christians who are serious about their faith must support the Jews and the nation of Israel.”

MEP Bastiaan Belder from the EU – Netherlands said that truth is in Israel’s protector “with a capital P.” He said the Lord encourages him not to be silent or intimidated when it comes to standing up for the “rightful cause of the Jewish state of Israel.”

MP Reverend Malani Mtonga from Malawi stated that his country seeks God’s blessings and that by blessing the Nation of Israel, he believes Malawi will also be blessed.

“I feel revived coming here and every time I go back I feel even more energized to preach,” Malawi said.

According to the Torah, Sukkot is a universal and not just Jewish holiday. For example, offerings were made in the Temple on Sukkot on behalf of the 70 nations of the world. The prophet Zechariah describes how non-Jews will flock to Jerusalem on Sukkot in the messianic age.

All who survive of all those nations that came up against Yerushalayim shall make a pilgrimage year by year to bow low to the King LORD of Hosts and to observe the festival of Sukkot.  Zechariah 14:16

Hotovely said Sukkot celebrates the connection between the people here in Israel and the people all around the world.

“We are celebrating together our ability to bring prosperity to the world that is starting from here, from the holy land, from Israel,” she said.

Glick took this a step forward. He said not only is Sukkot universal, but so is the entire redemption.

Uri Bank, who today serves as an adviser to Glick and worked alongside the late Elon, said that Elon used to believe Jerusalem and all of Israel’s holy sites belong to all people who believe in the Bible. However, he said that Elon taught that faith is not enough.

“We cannot just sit and pray,” said Bank. “We must use the tools we have to work. Whether you are a member of parliament, a pastor, a rabbi – we all have a job to do, to ensure the vision of seeing the people of Israel come home and the land of Israel be rebuilt.”