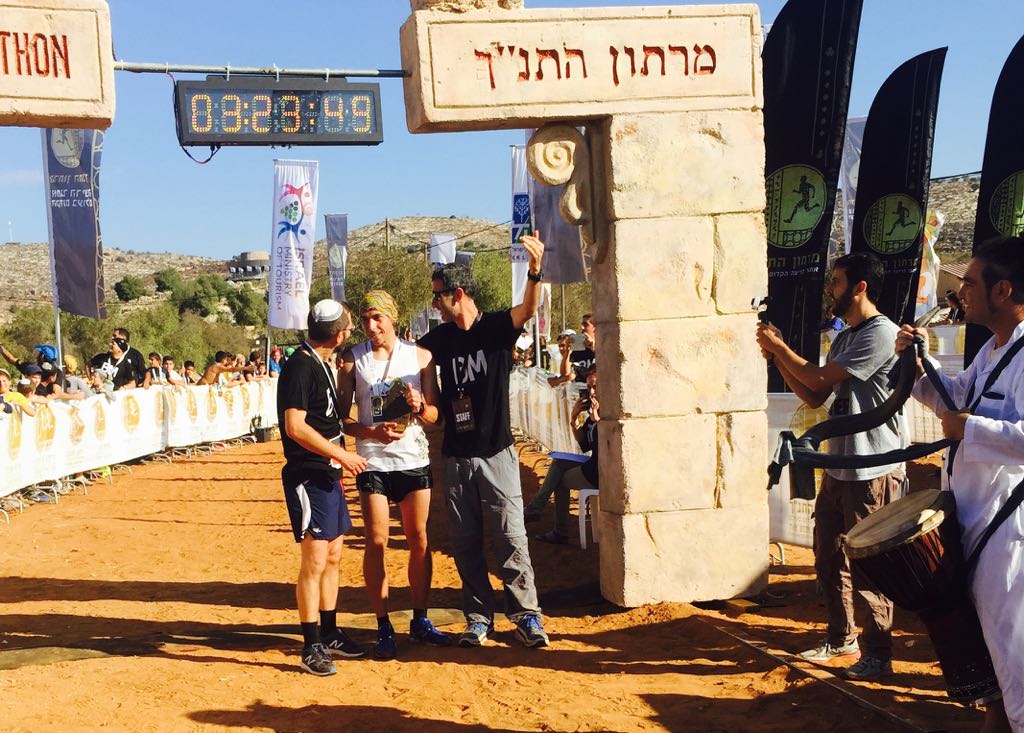 A Christian Zionist from Poland won the 2017 Bible Marathon, a unique race winding through the Biblical heartland of Samaria which took place on Friday.

“I love the people of Israel,” said Lukasz Wilk just moments after crossing the finish line.

A Polish tourist in Israel with about 100 other visitors from Poland on a Sukkot (Feast of Tabernacles) mission to pray for the Jewish people and the Land of Israel, Wilk said he learned about the marathon from a friend the year prior.

“When I heard about it, I knew I had to run in the Bible Marathon,” he said of the modern race, which is modeled after King Saul’s ancient Biblical run from Rosh Ha’ayin (Eben Ezra in the Bible) to Shiloh, as described in the Book of Samuel.

Shortly after the Jews entered the Land of Israel, they fought a losing battle against the Philistines. More than 30,000 Jewish soldiers were killed, including two sons of the High Priest, Eli, and the Ark of the Covenant was captured by the Philistines.

A man from the tribe of Benjamin, who according to Jewish lore was a young King Saul, ran from the battlefield in Eben Ezra and reached Shiloh the same day to report the news.

A Binyaminite ran from the battlefield and reached Shilo the same day; his clothes were rent and there was earth on his head. I Samuel 4:12

In later years, after the recapture of Samaria by Israel during the 1967 Six-Day War, the ancient course described in the Book of Samuel was measured at 42 kilometers, the official length of the Olympic marathon, decided upon in 1908 at the London Olympic Games. The Benjamin Regional Council together with the Israel Marathon Association re-established the ancient race three years ago.

This year, more than 2,000 runners participated in the day’s events, which also included a half-marathon, 10-kilometer and 5-kilometer races.

Wilk – with a race time of three hours, 23 minutes and 25 seconds – said he was not only proud of his running achievement but of the messages his win would send to his friends in Poland and to the People of Israel.

“Some of my friends in Poland said Israel is not a safe country and that I should not come here,” Wilk told Breaking Israel News. “I knew it was a lie. Israel is beautiful and safe.”
He continued, “In the Second World War, Poland destroyed many Jews – many people and things. But I believe that now we are restoring that past and on a better path…I am very in love with Israel and the Jewish people.”

The marathon race began before sunrise. The sound of the shofar, blown by men dressed in white and wearing ancient tarbooka drums, told the runners to get set and go. Participants ran through the ancient hills – a difficult, uphill course – alongside lavish vineyards, olive groves and other signs of the vibrant life of the people of Samaria. When the winner crossed the finish line, white courier pigeons were released.

Samaria is located in what the Bible defines as the heartland of ancient Israel. Shiloh was the religious capital of Israel for 369 years, from after the conquest of Canaan until King David established Jerusalem as the eternal capital of the Jewish nation.

The second-place winner, Yiftach Paschur from northern Israel’s Kibbutz Meirav, finished in three hours, 23 minutes and 57 seconds. He told Breaking Israel News that he has run the race since its restart in 2015. The first year he came in fourth place, last year third place, and this year second.

“There are not a lot of opportunities like this – to run in Samaria,” said Paschur. “This area is so beautiful.”

Paschur described himself as a traditional Jew, but said any Jew cannot help but appreciate the Bible.

“Running here is both being a part of history and very meaningful,” said Paschur, who suffers from Type I diabetes. He said that just like the Jews people who survive and thrive despite challenges, he too has managed to push many boundaries.

“I realized that if I could push this boundary [of running a marathon], I could push other boundaries, too and that everything in life could be accomplished,” he said.

Atara Ganz, 13, from Psagot, said running the Bible 5K was “very emotional for me. It was also very hard, but I ran with my brother, and he pushed me along.”

There were runners from 100 countries around the world. A new immigrant to Israel, Avraham Biro, ran with his paratrooper IDF unit. He said he could feel how he was “running in a better place” than back home.

Li Weiyi from China ran the 5K race with a group of around a dozen other tourists who, like Wilk, were in Israel for the Feast of Tabernacles and to pray for and bless the Land of Israel.

“We are believers in the Bible,” Weiyi told Breaking Israel News. “We came to this race because we wanted to walk in the path of the Bible. It was amazing and spiritual and like nothing I have ever experienced before. This land is amazing. This is the Holy Land.”