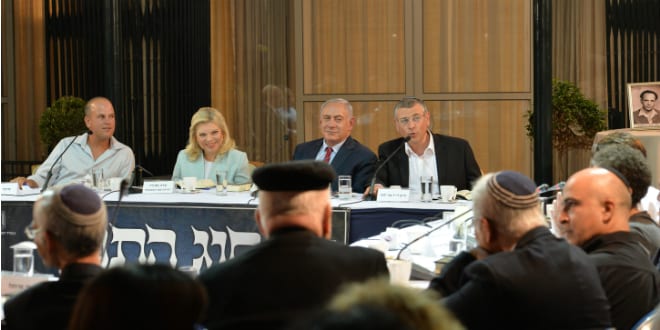 On Tuesday, Israeli Prime Minister Benjamin Netanyahu continued a longstanding tradition when he hosted a Bible study group at his residence in Jerusalem. This tradition has deep roots in the first-family and has Biblical significance for leaders of Israel.

The Bible study group was a tradition begun by David Ben Gurion, Israel’s first prime minister. It was discontinued but Prime Minister Menachem Begin reinstated the practice in the late ’70’s. The practice was abandoned but Prime Minister Netanyahu restarted the study group to honor the passing of Shmuel Ben Artzi, Sara Netanyahu’s father who passed away in 2011. Ben Artzi was a noted writer, poet, and educator, as well as a scholar of the Bible.

The study session was attended by Bat-Galim Shaer, the mother of Gil-ad Shaer, who was abducted and murdered by Hamas terrorists along with two other teenage boys in the summer of 2014.

Upon the conclusion of the study session, Shaer gave Netanyahu and his wife a book she recently wrote about her son.

The Netanyahu clan’s connection to the Bible is strongly reminiscent of the Biblical commandment for a king of Israel to write a personal Torah scroll. The Torah mandates that the bond between the ruler and the Bible be constant and unbreakable, similar to the manner embodied by the Netanyahu family.

And it shall be with him, and he shall read therein all the days of his life; that he may learn to fear Hashem his God, to keep all the words of this law and these statutes, to do them, that his heart be not lifted up above his brethren, and that he turn not aside from the commandment, to the right hand, or to the left; to the end that he may prolong his days in his kingdom, he and his children, in the midst of Israel. Deuteronomy 17:19-20

This Biblical mandate seemed to come alive two years ago, when Prime Minister Netanyahu took a break from his duties to compete in the International Bible Quiz in Jerusalem.