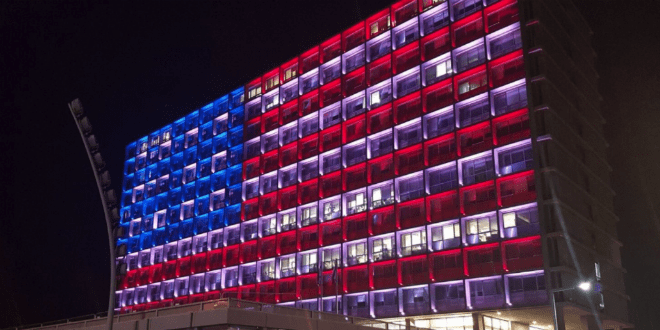 As Las Vegas mourns the victims of the the deadliest mass shooting in U.S. history, Israel expressed solidarity with America in no uncertain terms. The horrifying attack became a unifying force as world leaders responded with one voice against an act of violence, a plague that is threatening to engulf the entire world.

“On this terrible day, the people of Israel stand shoulder to shoulder with the American people in mourning and sorrow,” Netanyahu tweeted.

Our hearts go out to the victims’ families and we wish a speedy recovery to the wounded. We grieve with you.

As is customary after such tragedies, Tel Aviv’s city hall lit up in red, white and blue on Monday in a show of solidarity.

President Reuven Rivlin sent a message to US President Donald Trump offering his condolences over the shooting.

“The people of Israel join me in sending our deepest sympathy to you, to the participants in the festival, the people of Las Vegas and to all the people of the United States following this shocking attack which took the lives of so many innocent people and injured so very many more,” he wrote.

“We stand with you as you mourn the terrible loss of life and injury following this senseless attack on people who had merely gathered together to listen to music.”

Deputy Foreign Minister Tzipi Hotovely made a statement to the press.

“Israel is shocked at the mass murder that happened in Las Vegas,” Hotovely said.

As soon as the shooting stopped, mourning began. Las Vegas, a city given over to a 24/7 cycle of bright lights and entertainment, came to a standstill as the lights on the famous Las Vegas Strip were turned off to mourn the tragedy.

The lights of the Las Vegas Strip are dark tonight in honor of the victims of last night’s shooting. https://t.co/KZHnKsnIev pic.twitter.com/pE4zLD9ki9

British Prime Minister Theresa May called President Trump to offer her condolences to the victims.

Paris Mayor Anne Hidalgo tweeted that the Eiffel Tower will go dark on Monday night in tribute to the victims of the Las Vegas shooting and also to honor two women killed in Marseille in a suspected Islamist attack.

An official GoFundMe was set up by Steve Sisolak, the Clark County commissioner, to provide relief and financial support to the victims and families of the shooting​. The fund has raised almost $3 million from over 41,000 donors in less than 24 hours.