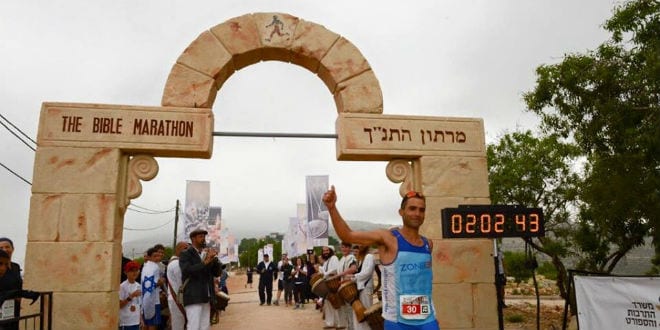 Deep in Israel’s Biblical heartland, an annual marathon brings thousands of athletes to run in the very footsteps of the Bible, tracing an ancient path run by King Saul himself in the days of the prophets.

Close to 2,000 people hailing from more than 10 countries will participate in the third annual Bible Marathon on Friday, October 6, during the holiday of Sukkot. Runners can race 5 kilometers, 10 kilometers, a half-marathon, or a full 42-kilometer marathon through the streets of the Binyamin region in the hills of Samaria.

The full marathon route runs from Rosh Ha’ayin (Eben Ezra in the Bible) to Shiloh, as described in the Book of Samuel.

Shortly after the Jews entered the Land of Israel, they fought a battle against the Philistines.

The Philistines fought; Yisrael was routed, and they all fled to their homes. The defeat was very great, thirty thousand foot soldiers of Yisrael fell there. I Samuel 4:10

The Ark of the Covenant was taken and the two sons of the High Priest were killed. A man from the tribe of Benjamin ran from the battlefield to Shiloh to spread word of the terrible defeat.

A Binyaminite ran from the battlefield and reached Shilo the same day; his clothes were rent and there was earth on his head. I Samuel: 12

This man ran 42 kilometers, which is also the official length of the Olympic marathon, decided upon in 1908 at the London Olympic Games. According to tradition, the Benjamin man was a young King Saul.

Today, to commemorate his desperate sprint, runners from all over the world dress in Biblical costume and set off to the sounds of drums and shofars through the scenery of the Bible.

The race begins as the sun rises. Men dressed in white bang goblet drums and the sound of the shofar is blasted. Runners head uphill most of the course. While participants pound the winding pavement, orchards, vineyards and layers of voluptuous greenery embrace them on every turn.

For the last two years, Avraham Hermon has wrapped himself in a toga, laced up his running shoes and taken off through the hills of Samaria. Racing alongside musicians dressed in similar Biblical costumes – sandals, headdresses and toga-wraps – and playing ancient instruments, such as flutes and harps, the Pennsylvanian native says he is “making history.”

“Wearing the historic garb and thinking about where I am running makes me feel a connection to the land,” Hermon, who today resides in Har Bracha in Samaria, told The Jerusalem Post. “We are running in the footsteps of history and making our own.”

“Everyone thinks the first marathon was when Pheidippides ran to Athens with the news of the great victory his people had over the Persians at Marathon in 490 BCE,” explained Hermon. “But, in reality, it was many years earlier, in the Bible, in the Land of Israel.”

Shiloh was the religious capital of Israel for 369 years beginning after the conquest of Canaan until King David established Jerusalem as the eternal capital of the Jewish nation.

Mentioned 34 times in the Hebrew Bible, Shiloh was the longest-standing Jewish capital of any city other than Jerusalem, explains David Rubin, a former mayor of Shiloh and the current founder and president of the Shiloh Israel Children’s Fund. In his book, “God, Israel, and Shiloh: Returning to the Land,” Rubin tells the story of the struggles and triumphs of Israel’s complex history, dating back to slavery in Egypt and continuing up to the present, including the period in which the Israelites occupied Shiloh as its capital.

Rubin told The Post that Shiloh was a fitting capital for the Israelites when it was established approximately 3,500 years ago by Joshua, son of Nun, for many reasons, including that Joshua was a member of the tribe of Ephraim and Shiloh is in the heart of the Biblical portion of the land allotted to this tribe.

Additionally, Shiloh, situated at the geographic center of the country, is strategically located in the mountains and, at the time, had a strong and flowing river.

At some point during those 369 years, a permanent structure was built for the Ark of the Covenant. Rubin says it is believed that the stone foundation for the Ark can be seen still today at Tel Shiloh, an archaeological dig near the city. Visitors can stand on the spot where it is believed the Ark once stood. The Ark itself was taken into the battle described in the Book of Samuel and captured by the Philistines.

The Biblical story of Hannah, who pours her heart out in prayer for a child, takes place in Shiloh. According to Judges 21, Shiloh is where maidens would dance in the vineyards each year on the 15th day of the Hebrew month of Av to meet unmarried men who came in search of brides.

“Shiloh, along with most of the land of Israel, lay barren for 2,000 years, until the Jewish people started coming back,” explained Rubin, describing Shiloh as flowing with vineyards and olive groves.

The Bible Marathon, while only officially established in 2015, has a longer history. In the early 1900s, a sportsman by the name of Yosef Yekutieli moved to Israel, then British Mandate Palestine. Yekutieli started the first organized sports competitions in Israel, including the Maccabiah Games.

“Yekutieli had read the story in the Tanach about the Benjamin man and his run from Eben Ezra to Shiloh and he wondered, what was the distance,” recalls Moshe Ronsky, tourism director for the Binyamin Regional Council.

Yekutieli for years was left to wonder because the area was under Jordanian control. But, says Ronsky, as soon as Israel won the 1967 Six-day War, Yekutieli hopped into his Jeep and drove the ancient path, determining its length of 42 kilometers. Yekutieli re-established the Bible Marathon two years later. However, with the political turmoil and security concerns at the time, “Israel was not equipped to keep the race going,” explained Ronsky.

“We have brought this race back to life,” he said of the Bible Marathon, which relaunched in its present form in 2015.

Running is becoming one of the most popular sports in Israel, said Ronsky. Each year, hundreds of thousands of Israelis run through the mountains, hills, valleys and dusty terrains of the Land of Israel – on fun runs, in half- and full-marathons and even ultra-marathon courses. The Bible Marathon, organized and managed by the Israel Marathon Association, is among the fastest-growing running attractions, said Association head Ofer Padan.

It is also the next chapter in the Jewish people’s thousands of years of history and “the fulfillment of Biblical prophecy,” Rubin says. “The prophecies promised that the children of Israel would return to these mountains and rebuild these Jewish cities and towns – that the children will once again be running through the streets of their Biblical homeland. That is literally what is happening today.”

Hermon expressed similar sentiments, musing, “I don’t know that this has ever happened before – a nation formed in its land, was separated from that land, and then returned to the land. It is the words of the prophets being fulfilled and part of that is being able to run.”

The Bible Marathon is not without controversy. It recently had its membership revoked by the Association of International Marathons and Distance Races (AIMDR) after Boycott, Divestment and Sanctions (BDS) activists claimed its route violates international law. Organizers received notice from the AIMDR president rescinding their membership and claiming the race went beyond the boundaries of the state of Israel and therefore was a violation of UN Security Council resolution 2334.

The Israel Marathon is actively fighting the issue, as there is no legal precedent for such action. This year, the marathon’s organizers have even invited Palestinians to take part in the race, though Padan says they have declined.

Padan, a secular Israeli, insisted the race is not a political statement. Rather, “It brings people from all religions and levels of religiosity together to come and run in a place that is not necessarily familiar to them, but is in the Bible.”

“It is part of our shared history,” he said. “It helps people understand each other.”

“I think there is an international market for the Bible Marathon,” Padan says. “It’s special people, a special story and a special event.”

Rubin says there are people and governments who consider Samaria controversial or an obstacle to peace. He, on the other hand, sees his community as peaceful.

He concluded, “In a time of great division in the world, the Bible Marathon from the ancient Eben Ezra to the modern Shiloh is a unifying force.”

This article was originally published in a different form in the Jerusalem Post.