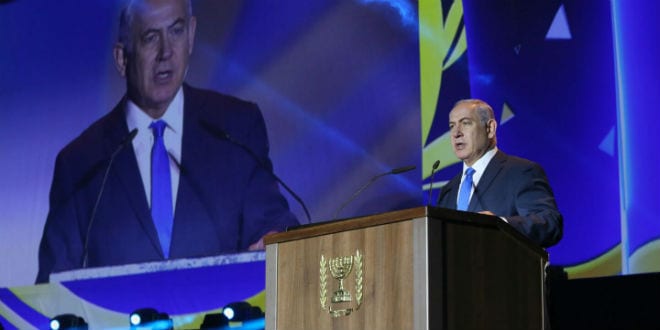 Netanyahu told the crowd of approximately 4,000 people at a makeshift amphitheater set up adjacent to the Gush Etzion junction that the region holds historic significance for the Jewish people and repeated his pledge that his government would not evict Jews or Arabs from their homes.

“The history of this special place is a microcosm of our entire existence,” Netanyahu said. “Fifty years ago we fought a stupendous war of defense and returned to Judea and Samaria, to the Jordan Valley and to the Golan Heights. We returned home to the patrimony bequeathed to us by our forefathers…The settlement enterprise is important to me, so let me say: There will be no more settlement evictions. We will not abandon our national home to become endangered.

“Gush Etzion will remain part of the State of Israel forever,” Netanyahu concluded.

Education Minister Naftali Bennett added a call for annexing the region, saying he did not take that stance lightly. But he said the current time was optimal for such a move.

“It is clear to all that we have a right to be here. Nobody is doing us any favors.We are here as sons returning to their land, not as foreign occupiers. There is no time better than the present, and even if the world objects, they understand the same thing that the Israeli public does – the Land of Israel will not be divided again!” Bennett said.

Notably, however, the ceremony – which had been billed as an “official” government celebration – was marred by right- and left-wing demonstrations, as well as by a list of public officials who refused to participate in the event, but who also insisted they were not “boycotting” the ceremony.

The loudest absences were those of Labor Party Chairman Avi Gabbay, Yesh Atid leader Yair Lapid, former Foreign Minister (and scion of a prominent family of right-wing Zionists) Tzipi Livni and especially Supreme Court justice Neil Hendel, who was instructed by outgoing Chief Justice Miriam Naor not to attend as the representative of the judicial branch because she felt the event was “political,” rather than a balanced state-sponsored celebration.

“Bibi and Miri [Regev] have once again turned an official state event into a divisive event. We will not participate in this discussion and we will continued to stay on target and act to unify people,” Gabbay wrote on Twitter.

Outside the event, hundreds of settlers, including former residents of the Migron outpost (which was demolished in 2012) and current residents of the Netiv Ha’avot outpost, called on the prime minister to fulfill a pledge to build permanent housing for the former residents and to ensure that a High Court of Justice order to evict the latter by March, 2018 would not be implemented.

At the same time, about two dozen Peace Now members protested the event, saying 50 years of “occupation” is nothing to celebrate.

“There are no reasons for celebration of 50 years of occupation. In 50 years of expanding settlements and deepening the control over millions of Palestinians, the Israeli government has been corrupting us morally and hurting the possibility of arriving at a negotiated two state solution. It is shameful that the government is organizing a ceremony, outside of sovereign Israel, to celebrate settlements which are ruining Israel,” said the group in a statement.