Did President Trump Just Begin War of Gog and Magog With a Tweet?

Home » Did President Trump Just Begin War of Gog and Magog With a Tweet? 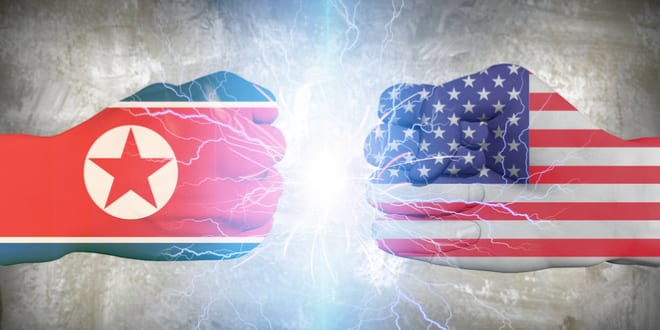 After President Donald Trump sent a threatening tweet on Monday, North Korean Foreign Minister Ri Yong-ho told reporters in New York that the US had officially declared war on the Asian nation.

Just heard Foreign Minister of North Korea speak at U.N. If he echoes thoughts of Little Rocket Man, they won’t be around much longer!

“The whole world should clearly remember it was the US who first declared war on our country,” Ri Yong-ho said at a press conference outside the UN General Assembly building. “However, last weekend Trump claimed that our leadership won’t be around much longer, and hence at last he declared war on our country. Given the fact that this came from someone who holds the seat of the US presidency, this is clearly a declaration of war.”

The prospects of war between the U.S. and a nuclear-armed rogue Asian nation are terrifying, but current events take on even greater import as many hints surface of this being the final battle of Gog and Magog prophesied in Ezekiel.

O mortal, turn your face toward Gog of the land of Magog, the chief prince of Meshech and Tubal. Prophesy against him Ezekiel 38:2

A recent article in Actualic, an ultra-Orthodox Hebrew language news site, cited an anonymous group of kabbalists (mystics) who identified North Korea as Gog, explaining that the conflict is imminent. They based their belief on verses in Isaiah.

According to their deserts, So shall He repay fury to His foes; He shall make requital to His enemies, Requital to the distant lands. From the west, they shall revere the name of Hashem, And from the east, His Presence. For He shall come like a hemmed-in stream Which the wind of Hashem drives on. Isaiah 59:18-19

The mystics interpret this verse to mean that the War of Gog and Magog will begin in the east (North Korea) but in the west (Israel), the war will only be seen from afar and Israel will not suffer.

“Troubles will come upon the east like a flooding river that washes away everything in its path,” the mystics told Actualic. “But the Spirit of the Lord will be seen and lifted up by this river to spread the word of his glory around the world.”

The mystics predicted that after the confrontation in North Korea, major messianic changes will take place in Israel that will indicate after the fact that the war was indeed the prophesied battle.

“Directly after that war, the lost Ten Tribes and Jews from the exile will return to Israel because of the difficulties caused by the war,” the mystics said, citing Ezekiel.

And you, O mortal, prophesy against Gog and say: Thus said Hashem: I am going to deal with you, O Gog, chief prince of Meshech and Tubal!I will turn you around and drive you on, and I will take you from the far north and lead you toward the mountains of Yisrael. Ezekiel 39:1-2

The mystics also stated that immediately after the war in North Korea begins, the Sanhedrin Court of 71 Elders will be reestablished in Jerusalem and construction on the Third Temple will begin. These changes are imminent and will begin when the hostilities end.

The political conflict is indeed very close to escalating into an actual shooting war and this was the second time in one week that President Trump threatened North Korea with obliteration. In his first address to the UN last Tuesday, Trump warned that if the US and its allies were attacked, he would “totally destroy” North Korea.

In the press conference on Monday, Ri Yong-ho threatened to shoot down American aircraft even outside of its airspace. “Since the United States declared war on our country, we will have every right to make counter-measures, including the right to shoot down United States strategic bombers even when they are not yet inside the airspace border of our country.”