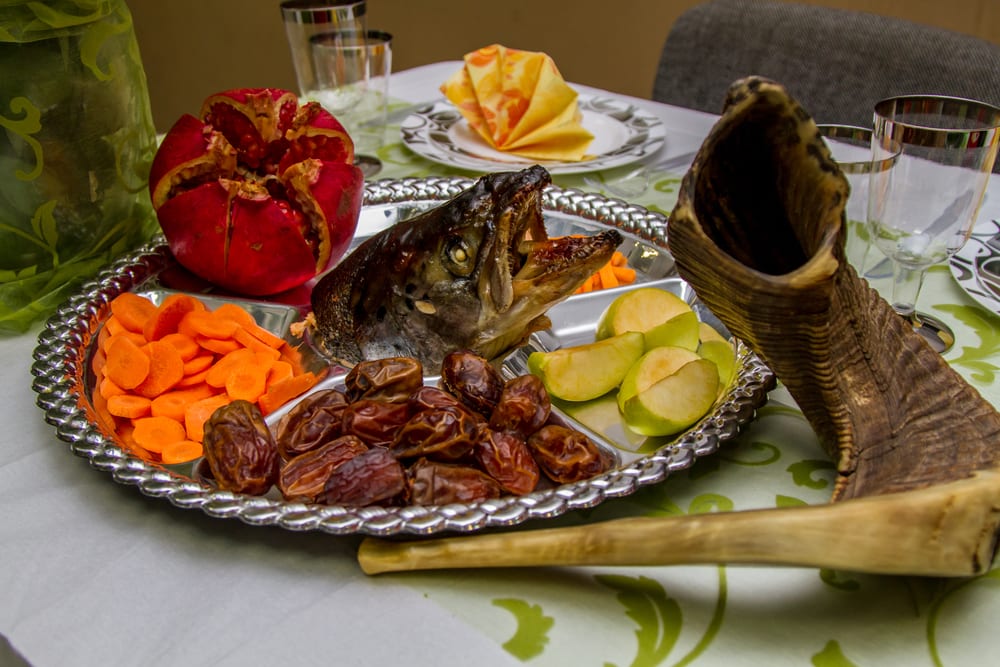 Rosh Hashanah, the Jewish New Year, begins at sundown on Friday night and ends at sundown on Sunday night. For Jewish families around the world, Rosh Hashanah is celebrated in synagogue and with family, friends, and food. Throughout the diverse and wide-flung Jewish world, different cultures have adopted different Rosh Hashanah traditions, some influenced by their country’s culture, such as in Ethiopia, where the shofar tradition is restricted to the kessim, the village elders, or in Cuba, where 10 grapes are eaten at midnight. But what binds the Jewish people together during Rosh Hashanah is the fundamental importance of passing on traditions through food, togetherness, and prayer, as well as a longing to celebrate the next Rosh Hashanah in a rebuilt Jerusalem.

French Jews of North African descent follow a Rosh Hashanah seder (ritual, symbolic feast) in which various foods are presented on a plate, each to symbolize what Jews desire for the next year. It is traditional to recite a prayer over each food.

The foods include the traditional apples and honey for a sweet new year, leeks (karti in Hebrew, similar to karet, remove) and spinach (salka, similar to istalek, to disappear) to represent the removal and disappearance of one’s enemies; dates, so that one grows as high as palm trees; squash (kra, to break) so that unfavorable verdicts are broken; sesame and pomegranate, so one’s merits grow as numerous as seeds; fish, to multiply like fish in the sea; and lamb’s head, so the people of Israel are the head of the nations.

A typical Rosh Hashanah dish in France is quiche à l’oignon, an onion quiche, emerging from a traditional French quiche – sans pork, of course. French holiday cooking has also been influenced by its North African immigrants who brought harissa, cumin, and honey, as well as spices from their original lands of Marrakesh, Oran, and Tunis, including anise, olive oil, rose water, and pine nuts.

Rosh Hashanah in Ethiopia is observed for one day, in comparison to the two-day chag (holiday) observed in the rest of the Jewish diaspora. According to Adam Abrams in a recent JNS article, outside of Ethiopia, there are four prayer services for Rosh Hashanah, beginning after sunrise. But in Ethiopia, there are three prayer services, including one before dawn, giving Rosh Hashanah its Amharic (Ethiopia’s official language) name “Brenha Serkan,” which translates to “the rising of dawn.” Rosh Hashanah is also known as “Zikir,” which is similar to the Hebrew word “zachor,” remember. In Ethiopia, like elsewhere, it is traditional to wear white clothing and have large feasts, often with lamb – the most expensive meat available.

Although Ethiopian Jewish traditions are often distinct from that of rabbinic traditions, many of the religious rituals and customs of the Ethiopian Jewish population are almost identical to the type of Judaism practiced in the period of the Second Temple, told researcher and professor Dr. Yossi Ziv to Breaking Israel News.

The elders (kessim) in Ethiopian villages blow the shofar and are the only ones capable of reading Jewish texts in the ancient Ge’ez dialect. They instruct the entire village on how to prepare for the holiday, share Biblical stories from ancient scripts, and “emphasize our long-held aspiration to celebrate Rosh Hashanah ‘next year in Jerusalem.”

Indian Jewish communities have existed since ancient times, although a majority of them have made aliyah, immigrated to Israel. The B’nei Israel descend from persecuted, lost tribes of Israel who settled in modern-day Mumbai; the Cochin Jews descend from the Portuguese inquisition; and the Baghdadis hail from Iraq.

Recently, a community in India known as the Bnei Menashe, has claimed descent from one of the ten lost tribes of Israel. According to Michael Freund, founder of Shavei Israel, the history, traditions, and customs of the Bnei Menashe convinced him of “the validity of their claim that they are in fact descendants of a lost tribe of Israel,” he told Breaking Israel News. They have expressed, like other Jews in exile, a deep yearning to return to Israel after 2,700 years.

Because of their relative isolation from the mainstream Jewish population, Indian Jewish communities have been largely influenced by Indian tradition, displayed through traditional Rosh Hashanah foods. According to culture heritage blog AntiquityNOW, “Jewish-Indian cooking in general is unique and differs according to the community.” Lamb and goat is often ordered from a farm, slaughtered, and split amongst families to make biryani, an Indian dish of spiced rice, saffron, and lamb.

The traditional chicken dish served is mahmoora, chicken cooked with tomatoes, spices, almonds, and raisins, served on a bed of pilau rice. Milk halwa is another traditional Rosh Hashanah dish of the B’nei Israel, similar to Israeli sahlab. Women traditionally wear colorful saris (Indian floral gowns) for Rosh Hashanah services, while men wear custom-made shirts, pants, and vest suits. B’nei Israel have carried these traditions from India to Israel when they have immigrated.

After Fidel Castro came to power, almost 95 percent of Cuba’s Jews fled, as it was too difficult to maintain religious traditions. Since the fall of the Soviet Union, Jewish life is being slowly rebuilt in Havana, where two-thirds of Jewish Cubans live. Rabbis from South and Central America came to teach the Jews of Cuba about religious traditions, and thus their holidays reflect an interesting mix of Jewish traditions.

Cubans have a tradition of eating grapes for good luck on New Years, so the Jews of Cuba have adapted their Rosh Hashanah traditions accordingly. According to Jennifer Stempel in The Nosher, at the stroke of midnight the eve of Rosh Hashanah, Cuban Jews enjoy 12 grapes, one for each month. “According to folklore, this practice stems from Cuba’s Spanish roots. Spanish grape growers may have instituted this tradition when they were faced with an overabundance of harvest, and needed to offload some grapes. With everyone in the community enjoying grapes, the grape farmers were certainly enjoying a sweet start to the new year.”

In Israel, Rosh Hashanah is a two-day holiday where, like during Shabbat, businesses are closed. Religious Jews attend lengthy synagogue services and festivities also center on the home, where festive meals are prepared for family and friends. During the week prior to Rosh Hashanah, thousands of Jews flow to midnight selichot prayers held at the Western Wall and in synagogues, requesting forgiveness and expressing repentance for one’s sins.

Like elsewhere throughout the world, the shofar is blown and it is customary to dip apples in honey to symbolize a sweet new year. Mystics say that on Rosh Hashanah, the three short wails of the shofar, the shevarim, represent the times of the Garden of Eden, before sin. Teruah, the staccato sound of nine short blasts, is the mournful sound of exile, and tekiah, the long, straight sound is the sound of the Messiah on his way, a return to Paradise and Messianic times.

Traditional foods include honey cake and round challot, braided sweet bread, which symbolizes the yearly cycle and circle of life. It is also customary to perform tashlich, shaking out one’s pockets and throwing breadcrumbs into an open body of water to symbolically cast away one’s sins.

Breaking Israel News would like to wish our readers from around the world a Shanah Tova U’Metuka, a good and sweet new year, from wherever you may be celebrating!