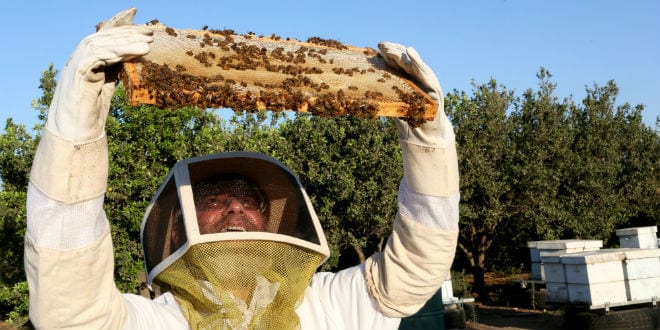 While countless studies consistently show that honey bees are dying out in the U.S. and in Europe, their continual flourishing in Israel validates the Biblical description of Israel as a land with blossoming fruits and flowing with milk and honey.

The problem, known as Colony Collapse Disorder (CCD), was first observed in France in 1994, then in the United States in 2006, and has since been found all throughout Europe and North America. According to the Natural Resources Defense Council, more than 25 percent of the managed honey bee population has disappeared in the United States since 1990. A report published this year by the Center for Biological Diversity stated that out of the 1,400 honey bee species studied, more than half were on the decline and nearly a quarter were at risk of extinction.

The disappearance of honey bees poses a serious threat to cultivated crops and the 90 percent of wild plants that are dependent on insect pollination, as honey bees are the world’s primary pollinators and are an essential component to functioning ecosystems. Important crops such as apples, berries, cantaloupes, cucumber, alfalfa, and almonds are dependent on honey bee pollination. Crop pollination contributes to 35 percent of the global food supply, meaning this phenomenon may pose a risk to stable fruit and vegetable yield and quality, and ultimately increases concern over feeding the world’s growing population.

But in Israel, a land promised to “flow with milk and honey,” damage to hives is miraculously non-existent, despite use of the same pesticides that are shown to lead to CCD. Yael Farbstein, an Israeli bee farmer, suggested to Breaking Israel News that as long as the prophecy of thriving land holds true, especially in the face of reverse phenomena elsewhere, redemption is close.

“Geula (redemption) is described in the Tanach (Hebrew Bible) explicitly as being accompanied by the blossoming of the land,” Farbstein said, noting that bees are responsible for most of the cultivation of the land of Israel and pointing to a prophecy in the Book of Isaiah which ties the land’s renewal to geula.

The arid desert shall be glad, The wilderness shall rejoice And shall blossom like a rose. Isaiah 35:1

Without bees, Israel could not blossom and the prophecy of redemption could not be fulfilled.

The Torah refers to Israel as a land flowing with milk and honey. “For example,” Farbstein told Breaking Israel News, “in reference to when our forefather Jacob sent his sons down to Egypt, they brought with them some type of honey or beehive.” She continued, “The honey that comes out of this area is clearly special.”

Then their father Yisrael said to them, “If it must be so, do this: take some of the choice products of the land in your baggage, and carry them down as a gift for the man—some balm and some honey, gum, ladanum, pistachio nuts, and almonds.” Genesis 43:11

Honey is also a particularly meaningful food for the Jewish people, especially now, the time of year leading up to the holiday of Rosh Hashanah, when Jews dip apples – incidentally one of the fruits that rely solely on honey bee pollination – in honey to symbolize a sweet new year.

Farming bees in Israel, Farbstein told Breaking Israel News, is also a way to establish ownership of the land as Jews and as Zionists. “When I first learned about bees, my teacher said that I would have to learn about how the bees grow in my region. Like with any form of agriculture, this requires a connection with this specific land. It is a relationship between us and the land,” she said.

Although Israel is indeed blossoming because of the thriving bee population, when it comes to bee cultivation, farmers in the Land of Israel still face unique challenges. Farbstein’s honey farm in Kedumim was twice broken into by Palestinian vandals who entered her factory, killed thousands of honey bees, and stole equipment and an entire season’s worth of honey.

Farbstein’s honey had recently won first prize at the Black Jar Honey contest in North Carolina in the category of “Best Tasting International Floral Honey.” But her dream of bringing to life Israel’s blessing as a land flowing with honey did not end with the vandalism, as Christian Zionists from all over the world have raised thousands of dollars to rebuild her honey farm. Farbstein will not give up in the face of terrorism, she told Breaking Israel News.  “We aren’t going anywhere. We decided that no matter how much work it takes, we are going to continue.”

Rabbi Shimon Apisdorf, teacher of Jewish spirituality and award-winning author, pointed out a different spiritual connection between bees and the Jewish people. He suggested that just as bees flourish in land of Israel, Jews in the diaspora should be following their lead, returning from exile to the land of Israel. Furthermore, he connected the unexplained difference between Western and Israeli bees to the aerodynamic conundrum of bumblebee flight.

“For a long time, scientists couldn’t figure out how the bumble bee flew,” he told Breaking Israel News. “They studied bumble bees from an aerodynamic perspective and were boggled, as their wings aren’t sufficient to lift their body. It took a long time for scientists to figure out that bumble bees use their wings differently than other flying insects – and that’s the Jewish people,” he said.

His conclusion had particular relevance to the story of Farbstein’s perseverance in her honey farming despite obstacles.

“The Jewish people shouldn’t be flying either, making it through history, and making such a contribution to the world as they do. But Jews are designed in an odd way, like bumble bees, to produce a dramatically unexpected result.”