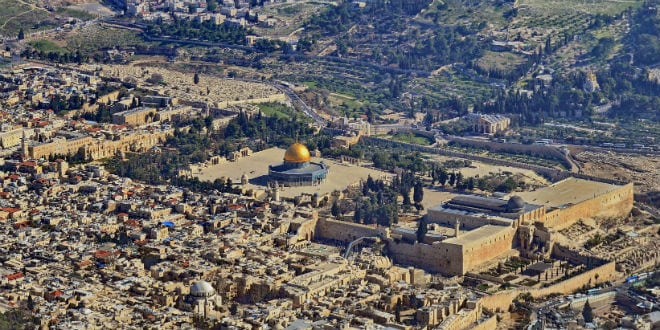 When Israel regains control of all of Israel’s seven cities and Torah can flow freely from within them, the ultimate redemption will come, said Rabbi Yishai Fleisher.

He added that the world’s efforts to hurt Israel, including resolutions from the United Nations Educational, Scientific and Cultural Organization (UNESCO) ignoring the Jewish connection to the land of Israel, not only rewrite history, but rob the world of the Bible’s light.

One way to counteract it, Rabbi Fleisher told Breaking Israel News, is to recognize that Israel’s seven holy cities – Be’er Sheva, Hebron and Beit Lechem (Bethlehem) in the south, Beit-El, Shechem and Tzfat in the north; and Jerusalem in the center – form a menorah (candelabra) that together emanate God’s light to the rest of the world.

“Organizations like UNESCO are trying to undermine the Jewish narrative and put cataracts over these holy cities, putting a stop to the success, growth and light of Israel and replacing it with terrorism, fear and darkness,” Rabbi Fleisher said.

In a new course offered by Yeshiva for the Nations, “Israel’s Seven Holy Cities,” Rabbi Fleisher teaches about the special qualities of these cities in their Biblical and contemporary context.

He believes that today’s Jews are living in the Third Jewish Commonwealth on the cusp of redemption. When Israel resumes total control of all seven cities, the words and teachings of the Bible will flow freely from them, undiminished and unimpeded, and redemption will come, he said.

“We are now living in a time of God’s great light,” said Rabbi Fleisher. “We see the menorah of the Land of Israel and we pray for peace in this Third Commonwealth and pine for the Third Temple.”

What makes these seven cities holy?

According to Rabbi Fleisher, when Abraham descended Mount Moriah he went down to his home in Be’er Sheva, where he set up an inn, welcomed travelers and convinced them of God’s kindness.

[Avraham] planted a tamarisk at Be’er Sheva, and invoked there the name of Hashem, the Everlasting God. Genesis 21:33

The Hebrew word be’er means well, which is a sign that Abraham made the city bloom with his Torah. Today, said Rabbi Fleisher, “Be’er Sheva is flourishing once again. There is a big renaissance happening in Be’er Sheva.”

Hebron is the first place in Israel that the Jews purchased land in the form of the form of Cave of the Patriarchs, in Hebrew known as Maharat HaMachpela.

Avraham accepted Ephron’s terms [of 400 shekalim of silver]. … So, Ephron’s land in Machpelah, near Mamre—the field with its cave and all the trees anywhere within the confines of that field—passed to Avraham as his possession, in the presence of the Hittites, of all who entered the gate of his town. And then Avraham buried his wife Sara in the cave of the field of Machpelah, facing Mamre—now Chevron—in the land of Canaan. Genesis 23:15-19

Subsequently, Abraham, Isaac, Jacob, Rebecca and Leah were buried in the cave. According to Jewish tradition, Adam and Eve are also buried there.

Later, Hebron became the capital of the tribe of Judah.

Literally “House of Bread,” Beit Lechem is the city David is from and where he was crowned as the king of Israel, said Rabbi Fleisher. It is also where matriarch Rachel is buried.

Thus, Rachel died. She was buried on the road to Efrat—now Beit Lechem. Genesis 35:19

Jacob set up a pillar above her tomb, which is still there to this day. For 3,000 years, Jews have come to pray at Rachel’s gravesite, crying alongside their foremother, “wailing, bitter weeping— Rachel weeping for her children. She refuses to be comforted for her children, who are gone.” (Jeremiah 31:14)

Rabbi Fleisher said Rachel will only stop crying when the Jews return to Israel and the Messiah comes.

Literally meaning “House of God”, Beit-El is the site where Jacob fell asleep with his head on a rock and in his dream ascended to the Heavens, said Rabbi Fleisher.

He had a dream; a stairway was set on the ground and its top reached to the sky, and angels of Hashem were going up and down on it. And Hashem was standing beside him and He said, “I am Hashem, the God of your father Avraham and the God of Yitzchak: the ground on which you are lying I will assign to you and to your offspring.” Genesis 28:10-22

“Beit-El is the gateway to Heaven,” said Rabbi Fleisher.

The city of Shechem is mentioned several times in the Torah in reference to the Biblical forefathers. It is the first place in the land of Israel that Abraham entered and the site of the first altar to God. Jacob also spends time in Shechem, even purchasing

The parcel of land where he pitched his tent … from the children of Hamor, Shechem’s father, for a hundred kesitah. Genesis 33:19

However, according to Rabbi Fleisher, Shechem is most connected to Joseph, who is still buried there today.

“Joseph left Shechem to meet his brothers who sell him into slavery, really starting his exile,” said Rabbi Fleisher. “Then, his own great-grandson. Joshua, returns to Shechem when they enter the Land of Israel and buries Joseph’s bones – brought all the way from Egypt – on the same plot of land that Jacob bought for a hundred pieces of silver from the sons of Hamor so many years before.”

The famous Kabbalistic rabbi, Rabbi Yitzchak Luria (the Arizal), came to Tzfat in the 1500s and there he ushered in the Third Commonwealth, convincing Jews to return to the Land of Israel and to study the mystical Torah.

“When we left into exile, we kept a skeletal version of Judaism without prophecy and we had a lower level of intimacy with God in terms of Judaism,” explained Rabbi Fleisher. “With our return to the Land, to being back in our natural habitat, the Torah we started to seek is the Kabbalistic Torah with more depth than the kind of topical Torah kept in the diaspora.”

He said the Arizal signifies the renaissance we live in today.

Finally, Jerusalem is the gateway between Heaven and earth.

“The Bible tells us that all the candles on this land-menorah look to the middle candle, to Jerusalem which was sanctified by the binding of Isaac on Mount Moriah and by the idea that Abraham actually circumcised himself there on the Temple Mount and when the first drop of blood hit the Temple Mount the earth became sanctified and this is where God wanted the altar of the Temple to be,” said Rabbi Fleisher.

“And we are now in the process of the Third Commonwealth and returning to our land and ultimately to that same spot to build our Third Temple,” said Rabbi Fleisher.

Everyone can play a role to usher in the End of Days, Rabbi Fleisher said.

“By studying this history and the Bible and then supporting the holy cities, you can counteract UNESCO’s cataract,” said Fleisher.

Do you want to learn more? Rabbi Fleisher’s new course, Israel’s Seven Holy Cities, is available through Israel365’s Yeshiva for the Nations. For more information or to watch the online course, visit yeshivaforthenations.com.